Shame and Fear – Speak and Hear

What would you entitle a homily based on these readings? Many possible titles came to my mind: “A Not-so Original Sin; Sin and Sinfulness; Forgiveness and Healing; The Solution to Sin,” etc.

What I decided upon was “Shame and Fear; Speak and Hear” because these two statements capture the dynamics happening within the first reading and the gospel. It is also a catchy title.

The underlying message, however, is this: we are invited to undo the original sin of our first parents by placing our faith in Jesus as Messiah and Savior, come to him for forgiveness and healing, and participate in his renewed creation.

A closer look at the first reading reveals some interesting and telling dynamics. Traditionally we call this event in the Garden of Eden our original sin which sowed the seeds of all human sin since that archetypal event. It is as if our genes became infected by that one sin, and from our birth we now have a propensity to sin and offend our loving God. 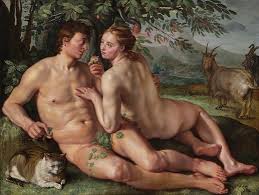 We are told that the serpent was craftier than any other creature the Lord God had made. As the story unfolds, we can see the nature of that craftiness. It is no accident we sometimes refer to the evil one as Lucifer, which comes from light, as evil in our world so often appears as a good, or poses as something that looks and feels positive.

So, the serpent begins to tempt Eve with a simple, innocent enough question: did God forbid them from eating from any tree in the garden? Eve responds with a simple, straightforward answer – they were not to touch or eat from the tree in the middle of the garden or they would die. The serpent then twists that response in an enticing manner which in essence is a lie, an untruth, promising them their eyes will be opened and they will be like God, “knowing good and evil.”

There it is – the evil of a lie, posing as a good, a truth. Who does not want to be like God? On top of that, are we not supposed to be united to God in the end? And Eve fell for that temptation – she saw the tree was good for food, a delight to the eyes, and desired as a source of wisdom, so she ate and gave it to Adam who also ate. The deception of the serpent is it knew in so doing, they would not “know good and evil” as it claimed, but rather they would be “deciding for themselves what was good and evil” – the true nature of sin that persists to this day.

The nature of the deception of evil continues in the consequences of their actions. True, their eyes were opened as the serpent promised, but what they “knew” was they were naked, experienced shame and compelled to cover their bodies. They also felt guilty, afraid and attempted to “hide themselves from the presence of God.”

Here we see the true nature of temptation as a deception, presenting evil as something good, and the true nature of sin, as humanity trying to decide for ourselves what is good and evil. There is nothing new under the sun, because that is still what so much of our world is doing today – trying to justify evil actions by covering them over with euphemisms and denying any objective truth that would attach morality to our actions. In many ways, this original sin is not so original after all, but rather commonplace.

So today we call an unborn child a clump of tissue, or simply a fetus to justify abortion; euthanasia becomes death with dignity or compassionate care for the elderly; speaking the truth about our values becomes hate speech or politically incorrect. Everyone thinks what they desire is a good – at least for them, and not an evil. It is interesting that many people who espouse freedom and liberty in the pursuit of these ends will be very polite and friendly, until they are opposed, and then the knives come out and they become just the opposite of what they espouse, all the while denying it.

I recall writing a letter to the editor in response to an article in the Edmonton Journal years ago by June Shepherd in favour of abortion. I was a young scholastic preparing for priesthood at Newman Theological College at that time, and with the help of then professor Fr. Adam Exner, worked hard on a concise, four-paragraph letter. The core of the letter was a statement that no rancher in Alberta would ever think of aborting the calf of a prize cow, claiming it was just tissue, so why would we be so callous to do that to an unborn child?

The Journal did print the letter, but only after removing that paragraph, which rendered the letter innocuous and limp. I felt furious and robbed – where was my freedom of speech in our supposedly democratic society, even back in 1973? Where was my liberty to speak my truth to that issue? I guess I had become politically incorrect.

What we see in the psalm and the gospel is just the opposite, and the solution to our sin and sinfulness – the gentle love of God present through forgiveness and healing. The psalm response reassures us that joy comes through the experience of forgiveness. All we have to do is, unlike Adam and Eve, acknowledge our sin, not hide our iniquity, confess our transgressions, and forgiveness, new life and joy will be ours.

In the gospel, Jesus, the Son of God, creator of this universe, comes among us as the New Adam, as a healer sent to restore creation. The deaf man with an impediment in his speech who was brought to him symbolizes our wounded humanity – unable to hear the truth of God and others who speak it to us, and limited in our ability to communicate our truth to others.

The physicality of the healing is striking, almost shocking. Jesus puts his fingers in the man’s ears, spits and touches the man’s tongue. Then Jesus looks up, sighs at the man’s plight, and speaks words of healing. The man’s ears were opened, his tongue released, and he spoke plainly. This is what we must do – bring ourselves to Jesus the Messiah who came with a two-fold mission – to redeem and to sanctify, to forgive us all our sins, and to heal us of all our sinfulness, that which makes us sin. And joyful are those who have the faith to do just that.

Jesus also led the man away in private, and told the people to tell no one about the miracle. That is Mark’s “messianic secret.” Jesus knew no one would understand he was not primarily a miracle worker, but the crucified Messiah who would deal with sin and sinfulness in our world by submitting to evil and overcoming it through long-suffering love and resurrection to new life. They would want to make him king, exercising political force to overcome the Roman occupiers, rather than desire the life he wanted to share with those who believe in him and his way of holiness, sinlessness and humble obedience to a loving Father in heaven.

The Eucharist is an experience of God forgiving and healing us even as we celebrate it with faith. May our celebration strengthen our faith in Jesus as the Messiah and Savior, help us come to him for forgiveness and healing, and empower us to participate in his renewed creation.