The Two Dimensions of Faith and Love:

Optional Memorial of Our Lady of Lourdes

What are the names of the two girlfriends that a priest or bishop can have? The answer is Karen and Sharon. Caring and Sharing!

Those two names sum up the essence of the message from today’s readings: We are to live the two dimensions of the cross – faith and love. Our faith is in God through Jesus, a faith that is best expressed by our love for one another, our caring for and sharing with one another.

The Gospel is all about faith in Jesus. He longs for solitude, so he crosses borders and goes into Gentile territory where he hopes no one knows his identity. He enters a house where he can hopefully commune with the Father in silent prayer.

When I was trying to learn Cree, I could identify with that. I lived incognito with a family in the Onion Lake First Nations community, trying to not let anyone know I was a priest, so I could concentrate on learning the language. However, word soon leaked out, and demands for ministry started to happen, very much like the Gentile woman coming to Jesus for a miracle.

Jesus’ response to her request seems harsh: “it is not fair to throw the children’s food to the dogs.” The meaning behind this phrase is that Jesus safeguards the priority of his mission to Israel, yet points to the possibility of a Gentile mission. The miracle is not so much one of healing at a distance to avoid breaking purity laws. It is rather the overcoming of prejudice and boundaries that separate persons. The exchange with the woman points toward the future in which Gentiles will be included; their faith will bring them salvation.

The Cree language adds a nuance to the seemingly harsh term “dogs.” The Cree word for dog is “atim” while the word for little puppy is a much softer “acimisis.” I suspect that is the word Jesus used, making it almost a term of endearment. In the end, we see Jesus truly caring for this woman, and healing her daughter because of her faith. There is a lesson here on reaching out to the marginalized, the outsiders, those who are different, who don’t seem to belong.

The first reading is all about love. Husband and wife are to become one flesh. Everyone has a yearning for intimacy. Every single person on this earth should have a soul mate, someone whom they can trust completely. Here we see love as trust and intimacy. Marriage means that husband and wife are to be a unique and exclusive gift to each other. It is striking how such a deep and profound need for intimacy also is very fearful, for intimacy makes us vulnerable. However, the bottom line is that love is willing to be open to being hurt, for the sake of the other, for the sake of the relationship.

At times some members of religious communities will express a need for intimacy that is hard to find in the life of their communities where the sharing is usually on a safe, general level, but not satisfying for them. The challenge of love as sharing is as acute for them as it is for a married couple. Two religious sisters who took a marriage encounter actually broke through in their relationship with each other and started sharing intimately for the first time. Their relationship was transformed by a marriage encounter of all things. 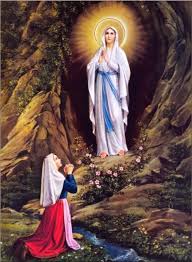 Today’s optional memorial of Our Lady of Lourdes invites us to be serious about our faith in Jesus and come to him for genuine healing in our lives. The Living With Christ, in its commentary on this memorial, informs us that in 1858 Mary the Mother of Jesus appeared to Bernadette Soubirous in a cave at Massabielle, near Lourdes in France. Just four years earlier, in 1854, the church had declared the dogma of the Immaculate Conception, so when the “beautiful woman” of Bernadette’s visions identified herself as the Immaculate Conception there was initial skepticism.

Although others accompanied Bernadette to the grotto, no one else could see or hear the visions. However, it did not take long for an Episcopal Commission, an official inquiry, to say: “We judge that Mary the Immaculate Mother of God, did really appear to Bernadette Soubirous on February 11th, 1858 and on certain subsequent days, 18 times in all, in the Grotto of Massabielle, near the town of Lourdes; that this appearance bears every mark of truth.” A few years later, this date was added to the list of Marian feasts to honour the mysterious beauty of the Immaculate Conception.

Since that time, millions of people have made a pilgrimage to Lourdes, with hundreds receiving physical as well as other kinds of healing. One person who witnessed such a healing was Fr. Lucien Larré. He recounted in a mission talk how he, with great doubt, accompanied a woman religious to Lourdes who was confined to a wheel chair. After a few days in Lourdes, suddenly she shocked him by standing up and getting out of her wheel chair. That healing proved to be genuine over the next few months, as she resumed her ordinary life and even skated when winter came!