The Reality of Sin:

The first reading speaks about original sin as the decision to decide for our selves what is right and wrong. It is described biblically as “eating from the tree of the knowledge of good and evil.” That was the sin of our first parents in the Garden of Eden, a sin that has affected the whole universe since then. In fact, perhaps more blatantly than ever, the secular world today is sinking precisely into practicing that sin – deciding for itself what is right or wrong, what is politically correct or not – legalizing euthanasia, terminating pregnancies, deciding one’s gender, what is true or not, etc.

In the gospel, Jesus speaks both of sin and sinfulness. Real sin is the things that come from out of our hearts and make us unclean, not what is outside of us like food. Jesus names things like fornication, slander, theft, murder, adultery, wicked acts, deceit and foolish acts. We could add, in our modern context, things like freely choosing abortion, putting political correctness over ethics, euthanasia and racist acts. The religious leaders of Jesus’ day taught that eating pork was a sin, yet thought nothing of cheating their parents out of care by declaring funds as Corban or dedicated to God, as in yesterday’s gospel. What is more sinful after all? The good news is that for these things, we can come to Jesus as the Messiah for his forgiveness of all our sins.

Jesus then includes painful emotions and negative attitudes that make us sin, or sinfulness, such as deceitfulness, foolishness, envy, pride, avarice and licentiousness or lust, to which we could add stubborn self-will, denial, self-righteousness, insecurity, judgementalism, feelings of superiority, need for power and control, as well as racist attitudes. These serve as the source of that inner uncleanness that emanates from our hearts. The good news here is that we can always come to Jesus as the Messiah for healing of our sinfulness.

Ray Dlugos, former director of Southdown, spoke at a conference for bishops and major religious superiors, of two kinds of sin only – to try to be more than human or to be less than human. To try to avoid all pain, fear our emotions and to think ourselves better than others, to live in fear and filled with false pride, is the sin of trying to be more than human.

To let ourselves go into dissolute living, to not care, to sink into lives of sloth and drunkenness, is the sin of trying to be less than human. These are the temptations that Jesus faced in the desert – to turn rocks into bread is to be greedy for possessions and to let our selves go into all sorts of sinful pleasure, to be less than human, while the other temptations, to jump off the temple and to have all the power in the world, is the sin of trying to be more than human. Jesus chose not to ever use his divine power in a selfish way, by choosing to simply be fully human, a model for us. 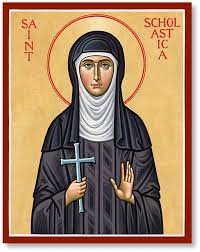 Today the church honours someone from whom only goodness flowed. Scholastica was the twin sister of St. Benedict, the founder of Western monasticism, and she was the leader of a women’s community likely located near Benedict’s monastery at Monte Cassino. This is also a feast day for the Benedictine monks here at St. Peter’s Abbey in Muenster, where I am presently on a private retreat.

What little is known about St. Scholastica’s life is found in St. Gregory the Great’s book, the second Dialogue, which is an account of her brother’s miracles. One of those miracles occurred when she was visiting her brother. When he was reluctant to have her stay longer, she prayed and instantly a storm came up preventing her from leaving, so they stay together longer conversing about holy things! She died about 543 and was buried in Benedict’s tomb, where he joined her in death soon after. She is the patron of nuns – especially Benedictines – and children with convulsive disorders.

The Eucharist is our best assurance against any kind of sin. So, let us avoid both sin and sinfulness, as we respond to original sin by faith in Jesus, receiving his forgiveness for sin, healing for our sinfulness, and living his commandments as did St. Scholastica.