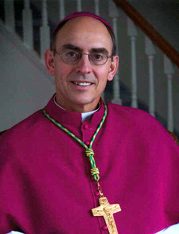 p Sylvain Lavoie, O.M.I., is a member of the Missionary Oblates of Mary Immaculate who has spent over 35 years ministering among the aboriginal peoples of northern Saskatchewan and Manitoba. A native of Highgate, Saskatchewan, he served as Archbishop of Keewatin-Le Pas until 2011. He now serves as chaplain and spiritual director at Star of the North Retreat Centre in St. Albert AB, and offers retreats and workshops throughout North America on addictions awareness and the Twelve Step Program.