Have you noticed that Jesus asked us to follow him much more often than to simply worship him?

Today’s gospel is an example, inviting us to serve Jesus by following him, by being where Jesus is, going where he goes, and doing what he does. May I suggest to follow Jesus involves faith, prayer and action.

In terms of faith, we are to believe in who Jesus is – Son of God, Incarnate Word, the long-awaited Messiah who came to redeem and to sanctify; to forgive and heal. We are to put our total trust in him as Risen Lord and Savior, the one who reveals to us who the Father is and the depth of the Father’s love.

In terms of prayer, to follow Jesus also means to have an intimate relationship with him through prayer, especially through the prayer of contemplation. Jesus wants disciples who are also friends, who love him, who are willing to waste time with him in prayer, soaking up his and the Father’s love, as he himself did so often.

Then we are to express the faith and love through selfless action, loving deeds, working for peace and justice for all. We are to give our lives away as he did, in selfless service. That means striving for justice for all, including a group of people, hard-working, tax-paying citizens, whose voice seems to be overlooked in today’s society as the pendulum has swung so far as to sometimes offer criminals more rights than the victims of crimes.

The image Jesus uses to describe himself, and those who would follow him, is that of a grain of wheat which, unless it falls on the ground and dies, remains just a grain of wheat. When a seed is planted, it doesn’t just grow gibber and stronger. It actually disintegrates and gives way to a whole new plant filled with amazing potential. It may seem illogical, but that’s exactly what happens.

Similarly, by likening himself to a dying grain of wheat buried in the ground, Jesus makes it clear that his mission is not to become stronger; it’s to give up his life so that people everywhere could be born to new life and bear great fruit. It can be easy, however, to lose sight of this most critical fruit. The life of Jesus comes to us ultimately through his greatest act of love – his death on the cross. 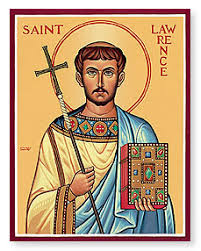 St. Lawrence, whose feast we celebrate today, is a moving example of this truth. A deacon in Rome in the third century, Lawrence lived during a time of great persecution. When an agent for the emperor demanded that Lawrence hand over all the treasures of the Church, he worked swiftly to distribute as much Church property to the indigent as possible, so as to prevent it being seized by the prefect. On the third day, at the head of a small delegation, he presented himself to the prefect, and when ordered to deliver the treasures of the Church he presented the indigent, the crippled, the blind, and the suffering, and declared these were the true treasures of the Church. One account records him declaring to the prefect, “The Church is truly rich, far richer than your emperor.” This act of defiance led directly to his martyrdom.

Lawrence knew his life was meant to be poured out for the people around him, and he lived that out to the very end. So how could Lawrence face his death with so much courage and even good humour? The first reading and psalm provide an answer: God made his grace “abundant” for Lawrence (“God is able to provide you with every blessing in abundance”) and that empowered him to give of himself in a heroic way. Psalm 112 adds “They are not afraid of evil; their hearts are firm, secure in the Lord.” Those words certainly apply to Lawrence, and should also apply to us.

We may not die as physical martyrs, although in this current world climate, that seems more likely all the time. However, we are called to, as Archbishop Emeritus Adam Exner OMI put it in theology class, “Live Calvary in slow motion.” That means daily dying to ourselves, in big and small ways. Or as St. Theresa of Lisieux wrote, we can do small things with great love.

It also means the ability to accept some redemptive suffering in our lives – to be able to accept some inconvenience or suffering without bitterness or resentment, as Jesus did, going to the cross with only compassion and unconditional love in his heart, and words of forgiveness on his lips. I think it also means working for justice for all peoples, not just a particular group in our society.

The Eucharist empowers us to be the seed that dies for Christ, that is willing to lose its life to find it again, and that as a servant of the Lord follows him to the Cross. Let us ask the Spirit to help us put other peoples’ needs ahead of our own, make us servants just as Lawrence was, and bear fruit not just for the church but also for the whole world.