A little trust game I like to play with children is to invite them to stand straight and stiff, arms at their side, and fall back into my arms. Some trusting ones promptly do just that, while other more fearful ones end up bending over backwards as far as they can, and need some coaxing to let go and fall back.

The message from Jesus today is clear: unless we become like trusting little children, we cannot enter into the kingdom of Heaven.

Not to get into heaven unless we become like little children makes that teaching a pretty serious one. Unfortunately, in our society today, that childlikeness is so often confused with being childish, and no one wants to be that.

Two outstanding traits of children are innocence and trust. We are being asked to strive to be innocent and pure in our lives. The sacrament of reconciliation can certainly be used for that, as will prayer for purity.

The quality, trust, has to do with how children place their complete trust in their parents. Jesus models that for us – he always had complete trust in his Father, and was always conscious of doing only the Father’s will for him.

It can and should be the same with us. We must, like him, depend and trust completely on the Father. We do that by depending and trusting completely on Jesus and his Word.

That is where the first reading comes in. Ezekiel was asked to eat, to consume the Word of God, and then go out to speak to the people of Israel in a prophetic way. That is what we must do – ponder and focus on the Word of God; read and pray with the scriptures; listen to the voice of Jesus in the scriptures, and then share that Word with others.

In both these ways, striving for purity and innocence, and trusting completely in Jesus and the Father through scripture and prayer, we can become childlike.

There are many models to follow. Considering innocence and purity, the magazine Love One Another promotes living a pure life by means of a Pure Hearts Movement that encourages young people to live a chaste life. Concerning being childlike, the late Fr. Brian Jayawardhana OMI prayed that he would die like a child, with a smile on his face, and he did.

Paul D’Arcy, retreat master, shares her story of how she was able to let go of her plans for her life after the loss of her husband and child in a car accident caused by a drunk driver, and find a greater purpose for her life, which she is now living out. That involved being able to forgive the drunk driver, even though he refused to repent or even to accept responsibility. 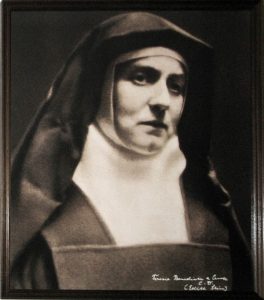 The Church honors today someone who certainly lived this gospel – St. Teresa Benedicta of the Cross. Born Edith Stein in Breslau, Germany (present-day Poland) on October 12, 1891, the youngest child in a large Jewish family, she ultimately gave her life away out of faith in Jesus. Always seeking the truth, she studied philosophy with Edmund Husserl and received her doctorate at age 25. After reading St. Teresa of Avila’s Autobiography, she famously said, “That is the truth.” Drawn to Catholicism, Edith was baptized in 1922 and spent the next 12 years teaching at Catholic institutions.

In 1934 she joined the Carmelites in Cologne, taking the name Teresa Benedicta of the Cross. By 1938 anti-Semitism was widespread, and her prioress helped Edith flee the Nazis, escaping to the Netherlands. True to her nature, she refused to go into hiding, since the Dutch were themselves often heroic in resisting Nazism. She continued her writing and studies until August 2, 1942, when she and her sister were arrested by the Gestapo. On August 7, 987 Jews were deported to Auschwitz, and on August 9, Edith Stein, her sister and others died in the gas chambers.

Although a convert to Catholicism, Edith always acknowledged her Jewish heritage. Pope John Paul II declared at her canonization: “A young woman in search of the truth has become a saint and martyr through the silent workings of divine grace. Edith Stein’s youthful work in the field of philosophy is breathtaking. She writes, interestingly, of “empathy,” for example, something that, she points out, we find only in human beings but had almost never been noticed in philosophy. She also launched some serious early critiques of Heidegger’s highly influential Being and Time, remarking that, for all its brilliant analysis, it operates as if we are beings without bodies. She is was a living witness to faith and reason who stayed true to the very end, and warrants being remembered today. Canonized on October 11, 1998, she is co-patron of Europe with Saints Benedict, Cyril and Methodius, Bridget of Sweden, and Catherine of Sienna.

The Eucharist is a gathering of the children of God, who come to listen to God’s Word, and to be nourished at our family table with the Body and Blood of Jesus. May our celebration help us to ponder God’s Word like Ezekiel, and be childlike like St. Teresa Benedicta, so as to already participate in the Kingdom of God.