The Power of Forgiveness and The Power to Forgive:

Robert went to a hospital to visit a young girl he had accidently struck with his car, and when he saw her in traction, blurted out, “Can you ever forgive me?” She responded simply, with a winning smile, “I have already forgiven you.”

That young girl was living the gospel today, in which Jesus teaches us it is imperative for us to forgive if we are to follow him.

To forgive is never easy, and something we need to learn to do as it is the core of following Jesus, who is forgiveness and never stops forgiving. Even Peter had to learn that lesson, given the limited notion of forgiveness he possessed – thinking seven times was plenty.

To the Hebrews, seven was a perfect number, so Peter was quite justified in thinking that would be more than adequate. Jesus picks up his reasoning, and replies in a similar manner, but in a way demonstrating how radically new his teaching really is – seventy-seven times, representing fulness.

To provide Peter, and us, with a bit more background to that revolutionary teaching, Jesus recounts the parable of the wicked servant who, after being forgiven a huge sum, refuses to forgive a paltry sum owed to him by a fellow servant. The core reality is God is not just love, but also mercy and forgiveness, and Jesus is that love, mercy, compassion, forgiveness and unconditional love of God in the flesh. On the Cross, Jesus forgave us and all humanity all the sins we have ever done and would do in the future.

Our task is to come to him, repentant, contrite, and desiring to change, to receive that forgiveness, which happens par excellence during any celebration of the sacrament of reconciliation. Mercy is always received first from God, and then we are asked to share that forgiveness with others, to do unto others what God has done to us.

Given that necessity to forgive, it is understandable Jesus also taught us how to forgive in Matthew 18:15, probably one of the least understood and least practiced passages in all the New Testament. It is such a simple teaching, yet so daunting to do, perhaps because it goes against every fiber of our being that is more used to the “fight or flight” reaction psychology teaches is a normal response to hurt. What Jesus teaches is a supernatural reaction to hurt, based not on anger or fear, but on faith.

When someone, even in the church or family, hurts us, we are not to fight back or escape the pain, but rather go to the hurtful person alone and, in most translations, “point out their fault.” I think if Matthew was writing today, with our greater knowledge of psychology, he would have written, “share with them how you feel about the hurtful behavior.” It is as simple as that. One can then add, “I’m trying to forgive you,” and let it go.

I have learned the response of the other is really not that important. Forgiveness is for us, more than the other person. Forgiving from the heart as Jesus asks us to do, sets us free from anger, resentment, bitterness and any desire for revenge.

When there is a positive response by the hurtful other, however, forgiveness holds out the invitation for an apology, and possible reconciliation. In fact, when two persons in a conflict are able to communicate their hurt feelings with love in this manner, trust each other and forgive each other from the heart, the relationship becomes even stronger than it was before the hurtful incident or incidents happened, because of all the love that is involved in the process of reconciliation. 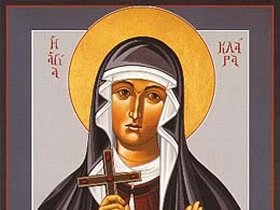 Today we honor St. Clare, who was born in Assisi about the year 1193. At the age of 18, she heard a sermon preached by Francis of Assisi and commited herself to a life of poverty. On Passion Sunday 1212 she secretly left home and went to the place where Francis lived with his community. Before the altar in the little church, she received the habit from him and went to live in a nearby Benedictine convent.

Clare was joined by her younger sisters Agnes and others, and the small community moved to San Damiano, near Assisi. Soon after, Clare’s mother and sister Beatrice also joined them. In 1215, Clare was made abbess of the Poor Clares. The women modelled their life on the ideals of St. Francis. They did without shoes, slept on the ground and never ate meat. Before long, other houses were founded in several countries.

Francis taught all his friars’ needs should be met solely from daily contributions. It was Clare’s great desire that her community also practise radical poverty. For 40 years Clare was abbess and never wavered from caring for her community or from assisting Francis. She received papal approval for her own Rule the day before she died – the first rule written by a woman for women. She was credited with many miracles and canonized just two years after her death.

May our celebration empower us to live this gospel of forgiveness seventy-seven times, any and each time we are hurt, over and over again if necessary. May our love expressed through pure forgiveness be the water that, over time, will wear down the hardest rock.