A Sunday school teacher asked her children, as they were on the way to church service, “And why is it necessary to be quiet in church?” One bright little girl replied, “Because people are sleeping.”

Faith that expresses itself through love is true faith indeed.

The first reading of the Sunday liturgy often contains an element of prophecy. This Sunday is no different. The prophet Isaiah tells us in no uncertain terms that God will come as a saviour to rescue us. He encourages the fearful and weak in faith to truly believe in the powerful presence of God in their lives. He promises that miracles of healing will be the sign of the in-breaking of God’s presence in the world. The blind, the lame, the deaf will be healed and there will even be ecological renewal. Could he have been intuiting Laudato Si, the encyclical of Pope Francis? 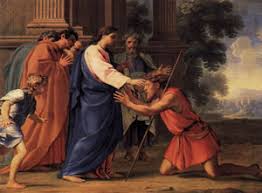 In the gospel we see Jesus fulfilling the prophecy of the first reading. In a way that breaks open all the restrictive and protective prescriptions of the traditions of Jewish religion, Jesus touches an unclean person, a handicapped person; a man who was deaf and had an impediment in his speech. He even goes beyond touch to use radical actions such as using spittle and putting his fingers in the man’s ear.

I believe it is this experience of total attention, caring and compassion on the part of Jesus towards this poor, suffering marginalized individual that healed him on the spot. No one before had ever treated him with such dignity, care, reverence, as did Jesus. And the man was healed. Surely this was the fulfillment of the prophecy of Isaiah. God had come in the person of Jesus, and the messianic promise was being fulfilled.

Interestingly, Jesus orders the people to not indiscriminately spread the news of the healing. This is called the messianic secret that is especially characteristic of the gospel of Mark. Jesus did not want to be known only as a wonder worker or miracle worker. He was about so much more than that. He was about establishing the very reign of God in the hearts of those who would believe in him and surrender their lives to him. All his miracles had that underlying purpose. Perhaps that is why they focused so much on illnesses to do with seeing, hearing, speaking and walking – he never healed appendicitis!

How would those who were in authority ever understand that kingdom orientation, until they had seen the full extent of the love and compassion of the kingdom displayed on the cross and realized in the resurrection? So, in the meantime, he ordered the people not to say anything about the miracle.

The second reading from James, a leader of the first Christian community after Jesus ascended into heaven, demonstrates that some of the followers of Jesus understood the import of what he was all about, that the reign of God was a manifestation of a new power, one that is counter-cultural and not easily understood by the world. Nor was this new reality easy to accept for the early followers of Jesus. They too were tempted to think that this new religion could give them status, power, importance, and a feeling of false security based on superiority over others. James nips that temptation in the bud. Real religion is not at all about class, status or making distinctions. James intuits correctly that to believe in Jesus is to see him in the least, the marginalized, the poor. It is to be humble, compassionate and caring, as was Jesus.

The psalm affirms this simple truth. God not only comes to save us, but also to bring justice to the oppressed, the poor and the marginalized. The message is clear. Our God does come to save us, not in the way of the world, but in a new and marvellous way of compassion and love for the least among us. And the way God wants to do this is through us, those who believe in Jesus. We must express our faith in the same way – the way of compassion and caring for all those in need.

In one of my missions, there was a girl known as the girl who could not talk. She was silent in school, and almost everywhere else, it seems. Preparing her for First Communion and Reconciliation was a challenge, as she would only respond to questions by nodding her head. However, once in high school, a teacher paid her special attention, had her write out her autobiography, affirmed her writing, and patiently was present to her after school when she hung around the classroom. Eventually she began to open up and start to share a little. A letter from her family during a Search weekend for youth also touched her deeply – a first real communication of love from them it seems. Finally, she blossomed, and was able to give a talk at a Search weekend. The tile of her talk? Opening Up! The song with which she ended her talk? Silence and I. There was not a dry eye in the room. One who was mute had experienced healing through loving Christian community.

The Eucharist is a powerful sacrament Jesus uses to love us, to remain with us, to continue to transform us today. It is an act of faith that expresses his unconditional love for us. May our celebration empower us to express our faith in Jesus through unconditional, compassionate love of all others, especially the weakest and the wounded of our world.