Secure in Faith, Reaching Out in Love:

Have you seen the movie, March of the Penguins? If not, I would encourage you to do so.

That movie, along with the readings today, encourage us to be secure in faith and reach out in love.

In that charming and touching movie, we see how penguins, in the frigid cold near the south pole, stay warm. They huddle together and begin a gradual rotation, each penguin slowly moving out towards the periphery, so that no penguin is left exposed on the outside for too long. Eventually, each one gets a turn at being warm in the center before they brave the cold again so that other penguins can warm up. 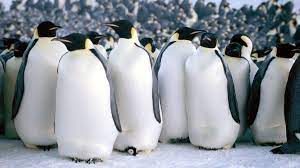 That image of penguins surviving the cold can help us understand what St. Paul means when he talks about how we were once “alienated” or “estranged” from God and now are “reconciled” with God through Christ (Col 1:21-22). Paul reminds us that we were once outsiders, distant from God, but that Jesus became an outsider so that he could draw us in to be warmed by God’s loving presence. Or as St Paul also said, “Jesus became poor so that by his poverty we might become rich” (2 Cor 8:9).

Throughout his years of public ministry, Jesus went to the margins to tell outsiders that they had a place in his Father’s heart. He purposely sought out those who had been left out in the cold, whether it was because they were poor or Gentiles or branded as public sinners. In fact, he himself became like these outcasts. He grew up in a poor family. He ate and drank with sinners. He welcomed Gentiles and unbelievers alike. They were all part of his “chosen” people, and they felt a closeness to him that precious few of Israel’s righteous religious leaders ever knew.

The reason Jesus could do this is because he was so secure in his identity as the beloved Son of the Father and in his intimate relationship with the Father. Jesus knew he was blessed by the Father, and that gave him the strength to not only reach out to sinners, but to even “sin” in the eyes of the religious leaders by breaking the Sabbath law. Jesus always put the law of love and mercy before the letter of the law. That led him to become the crucified victim, identifying totally with those judged unworthy by the official keepers of the law.

When questioned by the Pharisees, Jesus pointed to King David, a sinner who had experienced the Father’s unconditional love through repentance and forgiveness. That experience transformed David into the only true King that Israel ever had. That identity and relationship with God gave David the tenacity to overcome the rules around not eating the bread of the Presence. It was like David was saying, “I am king in the place of God, and if God was here right now, that is what God would do – use the bread of the Presence to feed my hungry men.”

So, whenever we feel like an outsider, remember Jesus, the ultimate outsider. He is with us, embracing us and guiding us to the warmth of our heavenly Father’s love. And remember the penguins too! Jesus placed himself on the outside to bring us in from the cold of sin and alienation. Now he is sending us to the margins, to the periphery as Pope Francis puts it, to welcome other people in, especially those different from us.

And those other people will then go out and find more to bring in to the center. And so, on and on, until the warmth of God’s love reaches every person in the world. It is a good thing there is plenty of room in God’s heart for everyone.

Today the church invites us to honor Blessed Dina Bélanger, who also lived these qualities in an exemplary manner. Born April 30, 1897, Dina was the only daughter of a well-to-do couple in Quebec City. Dina pronounced final vows with the Religious of Jesus and Mary at the age of 25. Her spirit of praise and generosity inspired her motto, “to refuse God nothing.” Despite failing health, her simple life in the convent as musician and educator is testimony to the value of living out our individual call to sainthood. As such she is a model for musicians, artists and educators. Dina died on September 4, 1929, at the age of 32, promising her family and friends to be a “beggar of love in heaven.” She was beatified in 1993.

The Eucharist is an experience of the Father’s unconditional love for us through the sacrifice of the life of the ultimate outsider, Jesus. May we learn a little from the penguins and above all, may our celebration grant us the strength and security to be like Jesus, and reach out to the periphery with mercy and love.