Memorial of St. Gregory the Great

Did you notice a puzzling dichotomy in the gospel? In one breath, Jesus seems to say he is like new wine needing fresh skins of faith, then claims old wine is better. What to make of this?

I think both Jesus in the gospel, and St. Paul in that first reading, are calling for the old wine of a mature faith able to stretch itself to include the new wine of the cosmic ramifications of the Jesus of history becoming the Christ of faith.

In just three paragraphs of the first reading, his letter to the Colossians, St. Paul manages to pack in a whole course on Christology and salvation history, centred on the one word, Christ, which is not Jesus’ last name, but rather a compelling title for Jesus of Nazareth, especially after his earth-shaking, cosmic resurrection from the dead to an entirely new reality directly involving us.

In those few lines, St. Paul reminds us the Christ is God (the fullness of God dwells in him); that he is the creator of every single thing in the universe (all things have been created through him and for him); we are his body and he is our head (He is the head of the body, the Church); and that humanity has been forgiven every single sin it has ever committed, is committing or will commit (through Christ on the cross, God was pleased to reconcile to himself all things).

These powerful statements by St. Paul cry out for some deeper explanation and understanding. The last claim that all is forgiven is an objective truth, for God who is forgiveness, has truly forgiven our sinful humanity in Christ. However, we can only receive and benefit from that forgiveness if we place our faith in Christ, repent of our stubborn sinful ways, and come to him in humble honesty and with outstretched hands to receive that forgiveness.

That the Risen Lord is head of the body, the church, is also a teaching loaded with profound implications. Paul is very formal here – calling the church “the body” rather than a more personal “his body”. It is like a theological formulation – Jesus of Nazareth promised he would build “his church” on the rock of Peter (Matthew 16:18), and now that Jesus is risen and become the Christ of faith, that Christ is now head of all those who believe in him, and we in turn are not just followers connected to him, but are transformed into his very body, each believer being a member of that body. Pope Francis went so far as to claim it is dangerous for a person to try to have an individual relationship with Jesus without being connected to a believing community, for one cannot separate the head from the body.

This is a mystery St. Paul loves to spell out in all his letters, and one that has challenged believers down through the ages. In a manner similar to the expectation God had of the Israel of old, to be an icon of God on earth drawing all nations back to God, the church is supposed to be a new icon of God’s presence on earth. St. Eugene de Mazenod, founder of the Missionary Oblates of Mary Immaculate, to which I belong, called the Church “a regenerated humanity.” More recently, Pope Francis has famously described the church as a “field hospital for the world.”

A mature Christianity, then, will be able to take in and live out all the implications of this mystery of faith – that Jesus of Nazareth has become the Christ of faith, and head of his body, the Church. One who most recently has perhaps grasped this mystery best, and tried to explain it in his latest book The Universal Christ, is Franciscan Father Richard Rohr. Those who have endorsed this book use statements such as the following to describe it:

“Rohr challenges us to search beneath the surface of our faith and see what is sacred in everyone and everything, because Jesus is the Christ. He sees Christ everywhere and not just in people. He reminds us that the first incarnation of God is in Creation itself, and teaches us God loves things and people by becoming them. Rohr helps us to see and hear Jesus of Nazareth in what he taught, what he did, and who he is – the loving, liberating and life-giving expression and presence of God, and in so doing is helping Christianity to reclaim its soul anew (fresh skins?). A major shift (paradigm shift?) in our culture is needed, and Rohr’s unpacking of The Universal Christ is a critical step in the right direction. Remembering our connection to ‘everything’ has implications for our religious traditions, society and even our politics.” 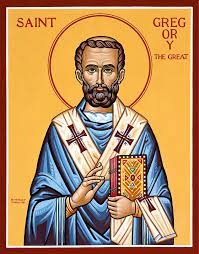 Today the church remembers someone who can serve as a model for us in the light of these readings. St Gregory was born about the year 540 into a wealthy Roman family. As a Benedictine monk, he used his great wealth to establish several monasteries. In 586 Gregory became an abbot. Four years later he was elected pope. His charity in feeding starving Romans, his protection of Jewish rights and his political diplomacy helped earn him the title ‘great.’ Credited with developing Gregorian chant, he is known as the Apostle of England for sending missionaries there, including Augustine of Canterbury. Gregory died in 604, and is a Doctor of the Church.

The Eucharist encompasses the whole birth, life, death and resurrection of Jesus, and his self-giving that truly redeemed the whole universe, which St. Paul claims has been groaning to be set free (Romans 8:22-24). It is Jesus the head who through his Word forgives and instructs us, and through the reception of his body and blood, nourishes and heals us.

May our celebration of this new wine of the kingdom both stretch our faith into fresh skins able to incorporate this eternal reality into our lives, but also make us into mature wine, sharing that new life with a world struggling to believe in God and in its own inherent goodness.