The Power of Forgiveness and The Power to Forgive:

Robert, who had a few drinks at a business event, accidently struck and injured a young girl as he was driving through an intersection. Technically it was not his fault, as the girl stepped out from behind a car in the other lane stopped for her to cross.  Because he had a few drinks, however, he felt guilty, even as he professed his innocence to his friends and wondered what he should do. A friend suggested he visit the girl in the hospital recovering from her injuries. He did so hesitantly, and when he saw her in traction, blurted out, “Can you ever forgive me?” She responded simply, with a winning smile, “I have already forgiven you.”

That young girl was living the gospel today, in which Jesus teaches us it is imperative for us to forgive if we are to follow him.

To forgive is never easy, and something we need to learn to do as it is the core of following Jesus, who is forgiveness and never stops forgiving. Even Peter had to learn that lesson, given the limited notion of forgiveness he possessed – thinking seven times was plenty.

The only number more perfect than that would be 777, symbolizing total perfection, infinity, completion, wholeness. Conversely, six would be the weakest number possible, as it failed to reach seven. 666 would then be the weakest, weakest number of all – the symbol for Satan, who is already defeated, even though he doesn’t know it, and is still wreaking havoc around the world.

To provide Peter, and us, with a bit more background to that revolutionary teaching, Jesus recounts the parable of the wicked servant who, after being forgiven a huge sum, refuses to forgive a paltry sum owed to him by a fellow servant. The core reality is God is not just love, but also mercy and forgiveness, and Jesus is that love, mercy, compassion, forgiveness and unconditional love of God in the flesh. On the Cross, Jesus forgave us and all humanity all the sins we have ever done and would do in the future.

Our task is to come to him, repentant, contrite, and desiring to change, to receive that forgiveness, which happens par excellence during any celebration of the sacrament of reconciliation. Mercy is always received first from God, and then we are asked to share that forgiveness with others, to do unto others what God has done to us.

Given that necessity to forgive, it is understandable Jesus also taught us how to forgive in Matthew 18:15, probably one of the least understood and least practiced passages in all the New Testament. It is such a simple teaching, yet so daunting to do, perhaps because it goes against every fiber of our being that is more used to the “fight or flight” reaction psychology teaches is a normal response to hurt. What Jesus teaches is a supernatural reaction to hurt, based not on anger or fear, but on faith.

When someone, even in the church or family, hurts us, we are not to fight back or escape the pain, but rather go to the hurtful person alone and, in most translations, “point out their fault.” I think if Matthew was writing today, with our greater knowledge of psychology, he would have written, “share with them how you feel about the hurtful behavior.” It is as simple as that. One can then add, “I’m trying to forgive you,” and let it go.

It is very helpful to do this without any expectation, desire for revenge, intent to change the other or attempt to punish. That is our great challenge, and where the teaching of Marriage Encounter, “Love is a decision” comes into play. We choose to love by choosing to forgive without any expectation. I learned this during a family week at a therapeutic centre when family members were asked to practice this skill with their client, and vice-versa. The exercise was very carefully controlled by the therapist.

In fact, I was corrected when I was attempting to confront the brother Oblate who for some reason had requested I be there. I certainly felt some resentment toward him, and when I tried to twist the knife a little with some accusations, the therapist stopped me cold with one statement –
“No, you can’t say that because to confront with expectation is already manipulation.”

I was stunned. Here I was, in a therapeutic centre, learning something I had failed to learn in all my religious upbringing and theological formation – that communicating one’s hurt with any expectation is no longer love – it is something less than pure love, and can border on adding violence to the world. It is only love, expressed as pure forgiveness, that is capable of breaking the cycle of violence in the world.

I am very grateful for this experience, and have tried to use this skill myself many times, as well as include it in any and all of my teaching in this area of forgiveness. Invariably, I have found most people are uncomfortable with forgiving, are unsure how to respond to forgiveness when it happens, and most often fail to apologize and reach towards reconciliation.

I have learned the response of the other is really not that important. Forgiveness is for us, more than the other person. Forgiving from the heart as Jesus asks us to do, sets us free from anger, resentment, bitterness and any desire for revenge.

When there is a positive response by the hurtful other, however, forgiveness holds out the invitation for an apology, and possible reconciliation. In fact, when two persons in a conflict are able to communicate their hurt feelings with love in this manner, trust each other and forgive each other from the heart, the relationship becomes even stronger than it was before the hurtful incident or incidents happened, because of all the love that is involved in the process of reconciliation.

That is the meaning of the incident in the gospels where a woman washes Jesus’ feet with her tears and wipes them with her hair. Jesus comments she must have been forgiven much to be showing so much love. We can’t lose with God – it is always win-win. The more we have sinned, the more forgiveness and love we receive from God, and the more we forgive, the more love of God we shower on the other. Above all, when we act like God, we get to feel like God – peace and joy, while our dignity and innocence returns, because we are just like Jesus on the Cross, and it doesn’t get any better than that.

Jack is struggling to keep his marriage alive to a very wounded, bitter, hurtful wife who wants to end it, opposes him at every opportunity and is making life miserable for him by projecting onto him all the defects of character she is unable to face in herself. This seemingly impossible situation can actually be a blessing in disguise, an invitation to Jack not to give up or to lash out, but to practice the art of forgiving, over and over again, day after day. He has an opportunity to become like Jesus, more and more, every day.

That will take a supreme act of faith on his part, and thankfully, thus far he is responding to the challenge, sinking deeper and deeper roots of faith, praying as he never has before, reading and learning from psychology and spirituality as never before, and leaning on others for support like never before.

I believe the Eucharist will also become more meaningful for him than ever before, as he turns to the Word of God and the Body and Blood of Jesus who is mercy, love and forgiveness incarnate and truly present in both Word and Sacrament. 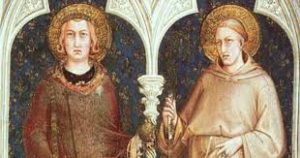 Today, the church honors two saints, Pontian and Hippolytus, whose stories, while different, intersect. Saint Pontian succeeded Pope Urban I in 230. When Maximus became emperor in 235, a period of persecution began during which Pontian was exiled to the mines of Sardinia. He resigned his office and died a martyr. St. Hippolytus was a priest in the early third century, a well-known scholar and theologian. A few of his works survive, including a prayer on which our Eucharistic Prayer II is based. When Callistus became pope in 217, Hippolytus rebelled for some reason, and became a lost sheep. In 235, banished to the Sardinian mines, Hippolytus met the exiled Pontian, was reconciled to the Church, and died a martyr’s death.

May our celebration empower us to live this gospel of forgiveness seventy-seven times, any and each time we are hurt, over and over again if necessary. May our love expressed through pure forgiveness be the water that, over time, will wear down the hardest rock.