Chosen to Live an Iconic Ideal:

A wanderer visiting Bro. Anthony noticed a beautiful manuscript in his cell. He stole it and took it to a book vendor to sell it. The vendor replied he would have to have it evaluated. Knowing only Bro. Anthony would know the value of the book, the vendor took the book to him. Bro. Anthony assured the vendor of its value and encouraged him to give its full value to whomever had produced it, as they probably needed the money. When the vendor told the thief that Bro. Anthony had affirmed its value, he was shocked. Shamed, the thief took the book back to Bro. Anthony and confessed his sin. Bro. Anthony forgave him and said he could keep the book. Confronted with such mercy and love, the wanderer joined the community and spent the rest of his life as a monk in prayer and service.

That little story in its own way touches on the poignant message of today’s readings – that despite our imperfections, we are chosen by God to be icons of God’s perfect love in the world.

The first reading from Ezekiel is a powerful, poetic summary of God’s merciful, ideal intimate love for Israel, God’s chosen people, in spite of their infidelity. The language the prophet uses to convey this message is that of childbirth into poverty and neglect, adoption, watching the child grow and blossom into full beauty and womanhood, only to experience rejection and infidelity in response. Israel is that child, born into poverty and slavery in Egypt, liberated from slavery, then chosen by God as the least of all nations to enter into an intimate, loving covenant relationship at Mt Sinai, given the Law, prophets, judges, kings, land and temple and called to be an icon of God’s love to all other nations. However, we know they always and consistently failed to keep that covenant, and were forever selling out to the false gods of possessions, prestige and power. Yet in the end, there is an affirmation of God’s endless forgiveness and commitment to her. Such is the nature of God’s being and God’s love for Israel, and for us.

The Christopher Leadership Course on effective speaking that ran for forty years in the Archdiocese of Keewatin-The Pas provides a parallel scenario to help us grasp the nature of God’s love. That course poured so much love and affirmation into the participants some were literally transformed into persons with greater self-confidence. The team would choose the shyest person in the class and invite him or her to give a talk about the course at the Sunday Eucharist as the course drew to a close. In one community, the husband of the class member chosen could hardly believe it was his wife speaking at the lectern!

That shyest, least confident person represents all of us. We have been chosen by God, despite our sins, weakness and shortcomings, to be transformed by God’s unconditional love for us into icons of God’s transformative love to the world.

In the gospel, that ideal love takes the form of a sacramental marital commitment. God’s vision for a man and woman is that they would come together and achieve a oneness that is unique and actually an icon of God’s love for all humanity. The trust, forgiveness, acceptance, achieving intimacy, closeness and bond of a married couple is to reflect God’s love for us. They are chosen by God to be what the chosen people of God consistently failed to be throughout their history – an icon of God’s love for the world.

When that works out, it is a beautiful reality that inspires. At a Marriage Encounter Deeper Weekend once, I heard a spouse responding to the question, “How do I feel with I achieve intimacy with my spouse.” She was using words like “no boundaries, separation or walls between us” and it dawned on me, she was speaking about salvation – she was experiencing God in her intimate relationship with her husband. That is the meaning of the words Jesus uses in John 14 – “When someone loves me and keeps my commandments (to love), the Father and I will come and make our home in that person,” and “I will reveal myself to them.” The best way for a husband and wife to experience God who is relationship, intimacy, unity is to experience intimacy with one another.

When that does not work, as it so often did not with the people of Israel, it is very painful for all involved, including God. When one spouse is unfaithful to the marriage commitment in any way, then the other spouse is called to go up on the cross and become a eunuch for the sake of the kingdom – forgiving, hoping and waiting. That saying of Jesus, coming immediately after his teaching about no divorce, refers not so much to religious who take the vow of celibacy, but to spouses in a marriage relationship who choose to stay faithful in spite of the infidelity of the other.

Martha married John, not so much out of love, as to escape a very dysfunctional, controlling, manipulative family situation where any love that existed was very conditional and had to be earned. John truly loves Martha, is trying to understand the woundedness that has marked her deeply, and is trying to make the marriage work. Martha, on the other hand, has the children she wanted and is now determined, it seems, to end the marriage so she can go on her own. She is totally controlling the sexual aspect of their marriage, and doing all she can to sabotage the relationship. John has effectively become a eunuch for the sake of the marriage, and of the kingdom, having to forgive his hurtful wife over and over again, day after day, hoping she will come to her senses and see how loved she is.

Like John, God’s love is always trying to break through our defenses, stubborn independence and misguided efforts to earn the love that is freely given. The late theologian Karl Rahner’s reflection on Jesus’ cry on the cross – “Father, forgive them, they know not what they do” – is relevant here. He claims they knew what they were doing – Pilate, the Romans, even the Pharisees, scribes and chief priests – all knew they were killing an innocent man. What they did not know was how much God loved them!

That is the perennial problem of our wounded humanity – always doubting God’s love for us and so often trying to find that love in the wrong way and trying to make that love happen on our own warped terms. We are the lost child in that first reading, so loved yet so often like a rebellious teenager, unappreciative of that love. 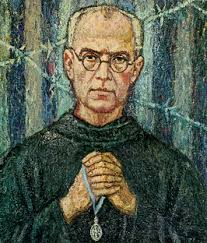 The church honors today someone who lived these readings to the full. St Maximillian was born in Poland in 1894. As a Franciscan, he worked to spread the Gospel in his native Poland as well as Japan. He had a great devotion to and promoted the veneration of the Blessed Virgin Mary. He was strongly influenced in 1906 at the age of 12, by a vision of the Blessed Virgin Mary. He later described this incident: That night I asked the Mother of God what was to become of me. Then she came to me holding two crowns, one white, the other red. She asked me if I was willing to accept either of these crowns. The white one meant that I should persevere in purity, and the red that I should become a martyr. I said that I would accept them both. Maximillian founded and supervised the monastery of Niepokalanów near Warsaw, operated an amateur radio station (SP3RN) and founded or ran several other organizations and publications. During the Nazi occupation of Poland, he helped thousands of refugees, including Polish Jews. He was arrested by the Gestapo in 1941 and imprisoned at Auschwitz. Three months after Maximillian’s arrival, a prisoner escaped. In retaliation, 10 men were chosen at random to die. One was a young father; Maximillian offered to take his place. His offer accepted, Maximillian died on this day in 1941 and was canonized in October 1982. I believe the young father he saved was present at his canonization ceremony.

The Eucharist is a quiet, even silent at times, yet consistent, ever present reminder of that love of God in Jesus Christ, so freely given and so powerfully transformative for anyone who can come with humble faith and open hearts to simply receive that love generously offered to us through Word and Sacrament.

May our celebration break open our hardened hearts to realize the love God has for us, and to respond to that love as icons of God’s love by living the ideal of that love in the world.