When it comes to the readings, Easter Monday is an interesting mix of Pentecost and Easter – of the effects of the Holy Spirit, and the resurrection of Jesus from the dead.

Perhaps that is the influence of St. John, whose eagerness for the fullness of the Good News of Jesus has him placing Pentecost, the giving of the Spirit, on the evening of the same day that Jesus rose from the dead, in the Upper Room, where Jesus imparts his Spirit of forgiveness to the apostles.

That reality, and Easter celebrations in the north, suggest a message of three elements that capture the essence of Easter: belief in the resurrection, reconciliation with all others, and acceptance of our losses. 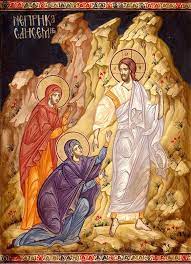 Regarding faith, Peter in the first reading and the women in the gospel are all trying to adjust and integrate into their lives what has just happened to them – for Peter, the gift of the Holy Spirit, and for the women, the empty tomb and the appearance of Jesus to them. They were challenged to believe in what seemed impossible.

That is also our challenge – to deepen our faith in the resurrection of Jesus from the dead, and the power of the Spirit of the Risen Lord to work in our lives.

Regarding forgiveness, the main manifestation of the Spirit in our lives will most probably be around forgiveness and reconciliation – the ability to forgive those who have hurt us in any way, and the humility to apologize to those whom we have hurt. For many if not most of us, that would be the surest sign and experience of the resurrection of Jesus in our lives.

Regarding acceptance of our losses, we sometimes learn of someone’s death months after it has happened for some reason. That happened twice when I returned to the north for seasonal ministry, only to find someone I expected to visit had passed away. That shock stayed until I mourned and grieved the loss, and like Mary Magdalene, did what Jesus told her – let them ascend to the Father so that I could receive their spirit to be with me in a new way – which is what Pentecost was all about for the early Church – receiving the Spirit of Jesus in a new way.

So Easter is all about faith, forgiveness and acceptance. I happened to meet with Bob on Easter Sunday, a young person who is trying to recover from drugs and alcohol, and is now facing a debilitating terminal illness. Bob also happens to be alienated from his family, through a series of mutual hurtful events and dysfunctional situations that have left him disillusioned and scarred. On top of that, his mother, the only member of his family to whom he was close, had passed away and his father had begun a new relationship that was too soon for him and left him feeling bitter.

Bob had pretty well given up on life, and had opted to forgo treatment for his disease, as no one in his family seemed willing to help him. Bob and I talked about the meaning of Easter for him in this situation. I encouraged him to first of all write a letter to his mother, sharing his feelings with her that he never got to tell her when she was alive. Then I encouraged him to write letters to his father, and other family members, to both try to forgive them their hurtful behavior, as well as apologize to them for his own hurtful actions.

The reasoning I used was the doctrine of purgatory that Ron Rolheiser OMI would call the pain of entering heaven, and a letting go of the things of the earth. We can’t drag any unfinished business into heaven, so this was Bob’s opportunity to do his purgatory here on earth, with what time he had left. That would be his experience of the new life of Easter, setting him free from anger and resentment, shock and shame, sadness and self-pity, guilt and fear.

I mentioned the example of a video I use for workshops and retreats of Mary Johnson in Minnesota, who was eventually able to forgive the young man who murdered her son. As she explains in the video, forgiveness did not excuse what this young man had done – he murdered her son. But she explained that forgiveness was for her, because unforgiveness was like a cancer that was eating her up from the inside. Now they are actually close – like mother and son. That is amazing grace, and hopefully what Bob will be able to do.

The Eucharist is a sharing in the unconditional love and forgiveness of Jesus on the cross that is made present for us, to empower us to go out and do the same. Those who do so will experience both Easter and Pentecost, all at the same time. May God bless us all with that Easter Spirit.