Ordinarily, liturgists try to find a first reading that connects with the gospel for the day.

That connection today is very clear and invites us to put our total faith in Jesus, to turn to him for new life.

The first reading from Numbers is the familiar story of serpents biting and killing the Israelites in the desert. They complain to Moses, who prays to God and asks God to take away the serpents. Interestingly, God does not take away the serpents. Instead, God instructs Moses to make a bronze serpent, put it on a standard, have the people look at it, and they will live. 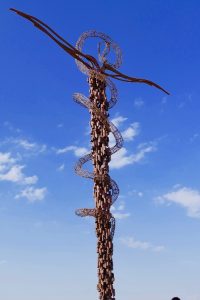 That bronze serpent raised up on a standard in the desert had no poison in it. It was a bold yet subtle prefiguring of Jesus who has no sin in him, no addiction in him, and who would also be raised up on a standard. God was preparing God’s people, almost subconsciously, to look forward to a figure raised on a cross who would save them, liberate them and give them new life.

Although the Internet suggests that our present-day medical alert symbol of a serpent on a standard comes from Greek mythology, I would suspect that this passage may also have played a part in that development.

The connection between the readings becomes very clear in the discussion between the resistant and misunderstanding Jewish religious authorities and Jesus about his identity. They did not understand his relationship with the Father at all, so Jesus had to tell them plainly, “When you have lifted up the Son of Man, then you will realize that I am he” and that he is one with the Father.

That incident in the desert should have prepared them for what the Messiah would look like, not a desired triumphant political liberator, but a suffering servant and sacrificial victim. How fortunate we are to have been given the gift of faith in Jesus as Lord, Savior and Messiah, the Lamb of God who truly takes away the sin of the world and can give us eternal life through faith in him and love for one another.

Fr. Joby in Edmonton showed me a video, during the Lenten Mission in his parish, of a Muslim Imam who amazingly became a Christian through his study of the Quran. At one point he realized that no one could answer the question, “Who is Jesus?” Was he either created or the creator? He began to wonder and read through the Quran again. He discovered that the Quran mentioned Jesus much more often than Mohammed, and held Jesus in a much higher light than Mohammed. He found that in the face of all obstacles and even threats to his life, he had to become a Christian and is now an outspoken witness to Jesus. He has put his faith in Jesus and turned to him for new life. 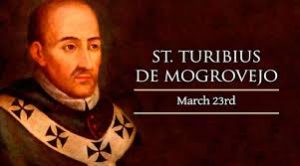 Today the Church invites us to honour St. Turibius, who was born in Spain about 1538. He was a professor of law when King Philip II appointed him chief judge in the Inquisition of Granada. Later, he was named archbishop of Lima, Peru. In Lima, he was appalled by the attitude of the conquerors. Turibius condemned abuses and provided for the people founding numerous schools, hospitals and churches, and establishing the first seminary in Latin America. He learned the Indigenous languages and was an effective teacher and preacher. He died in March 23, 1606 and was canonized in 1726. He is a patron of Latin American bishops.

The Eucharist is itself an act of turning to Jesus in faith, to hear his Word and to receive his Body and Blood. Our communion with him in turn transforms us into the Body of Christ sent into the world to proclaim this Good News.

So, as we celebrate today, let us pray for an even stronger faith in Jesus as Lord, Savior and Messiah, Son of God and Son of Man, who alone can give us eternal life.