The Mystery of Forgiveness and Non-violent Love

To forgive from the heart is to act like God, and to get to share in God’s serenity, inner freedom and even joy.

In the gospel, the Pharisees shame a woman, in the presence of Jesus, who was guilty of committing adultery (I always wonder why the man was not also included) and refer to Moses and the Law to justify killing her. Jesus responds by writing twice in the dust and saying simply that one without sin should be the first to throw a stone. They all leave silently, starting with the oldest. What is going on here?

To properly understand this incident, we can must the question, “Who else in the scriptures writes twice with a finger?” The answer is God, in the book of Exodus. After writing the 10 Commandments (the Law of Moses), God sends Moses back to the people whom he finds committing idolatry (a few letters different from adultery) and he reacts violently. Moses burns with hot anger, smashes the tablets, grinds down the golden calf into powder, forces the Israelites to drink it, then ordered the sons of Levi to kill up to 3,000 people. Moses told them they had received a blessing in so doing, and returned up the mountain to make atonement for them (Ex 31:18, 32:7-29).

On the mountain, Moses wants to see the face of God. God writes the commandments a second time (Ex 34:1-2) and passes before Moses, proclaiming that God is “the Lord, merciful and gracious, slow to anger, abounding in steadfast love and faithfulness, keeping steadfast love for the thousandth generation, forgiving iniquity and transgressions and sin” (Ex 34:6-7). Having learned that God is merciful, compassionate and especially non-violent, Moses then goes down the mountain, accepts the people where they are at and works with them to grow in faith. 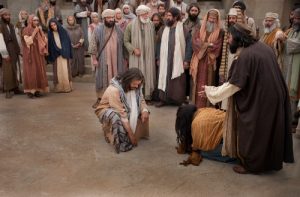 What Jesus implied by that gesture of writing on the ground twice was a silent message to the Pharisees who wanted to kill the woman because of Moses, to learn what Moses learned on the mountain when God wrote with God’s finger twice – that God is not violent, but rather merciful, compassion, forgiveness and steadfast love. They got the message, but there was no change in them – symbolized by their leaving one-by-one starting with the elders. It was the woman who in this incident was forgiven and transformed.

The first reading about Susanna today presents an almost parallel, yet starkly contrasting situation. Here, the Law of Moses was being used to kill an innocent woman, and to enable the lustful elders to escape punishment for their deceit. Daniel steps in, exposes their lie, and as the passage states, “acting in accordance with the law of Moses, the elders were put to death, and innocent blood was spared that day.”

In this case, justice was done, but there was violence and death. This was a Hollywood ending – the bad get what they deserve, and the good are spared. That is not the case in the gospel. Jesus is not a Hollywood star, and the gospel is not a Hollywood movie. With Jesus there is no violence, no killing, no blood is shed, innocent or otherwise. What Jesus is revealing here is a glimpse into what he will reveal on the Cross – that God is mercy, compassion, forgiveness, unconditional love, and ultimately, non-violent. That is a lesson that our world still has not learned, with so much violence done in the name of religion.

In the movie The Shack, Mckenzie struggles mightily with the mystery of evil and forgiveness. His encounter with God as a relationship of three persons who are all good, loving and forgiving, stretches him to the limit, until he can finally forgive his own father, and finally, the man who murdered his little daughter. In that forgiveness, he finally finds peace and the ability to return to his family a transformed person, ready to be reconciled with his own family and find new life and joy with them once again.

The Eucharist is a sharing in the mystery of God’s incomprehensible love, making present for us that love of Jesus on the cross that is pure forgiveness beyond all reasoning.

May our celebration empower us to forgive as God does, and to experience the peace, inner freedom and joy that God experiences as a divine dance of love.