The New Passover in Jesus

“Jesus became the source of eternal salvation for all who believe in him.”

That one sentence from the Letter to the Hebrews in today’s readings best expresses the message of this celebration: we are invited to put our complete faith and trust in Jesus, and thus experience eternal salvation.

In the first reading, the prophet Jeremiah provides us with a significant background to this encouraging message. He speaks of a time when God will make a new covenant with Israel and Judah, unlike the covenant of Moses that they broke. It will be an inner covenant written on their hearts that will make them into the people of God who know God, who walk in an intimate relationship with him, like Adam and Eve. This covenant will be based on the forgiveness of sins.

In the Gospel passage from John, we see this new covenant unfolding. Some Greeks wanted to see Jesus. In response to this request conveyed to him by Philip and Andrew, Jesus seems to go off on a tangent that doesn’t seem like a response to the request at all.

Actually, it is the right answer! As the meditation for this Sunday in The Word Among Us puts it, “these Gentile converts had come to worship at the Passover feast, but Jesus is saying that their Passover will not happen until after the resurrection.” That is because he is the true Lamb of God whose passion, death and resurrection will do much more than liberate the Jews from their political oppressors – he will overcome their real enemies, sin and death. 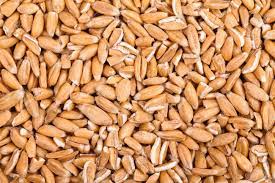 Jesus will accomplish a new Passover. He is the “grain of wheat” who will be sacrificed for sin. His death is necessary so that he could produce “much fruit” in the form of salvation for everyone. That is why the Letter to the Hebrews could proclaim that he is the source of eternal salvation, not just for the Jews, but also for everyone. No one will be excluded, not even these Gentiles!

Through his passion, death and resurrection, Jesus will completely fulfill the prophecy of Jeremiah, in all kinds of ways. First, Jeremiah states that the Israelites broke the covenant “even though God was their husband.” That statement hearkens back to the Garden of Eden where Adam and Eve enjoyed an intimate relationship with God. They walked hand in hand with God in the cool of the evening. However, that relationship was indelibly damaged by their sin, and they lost that intimate relationship with God.

Jeremiah continues to say, however, that this new covenant, this new law will be an inner law that will be written on their hearts. It will transform the scattered tribes of Israel once again into the people of God who shall “know the Lord,” from the least to the greatest. It is Jesus who is the source of this renewed relationship with the Father. Through faith in him, we can enjoy the very same intimate relationship with the Father, whom he called Abba, “daddy” that he enjoyed. He is restoring to us the Garden of Eden. Now what good news is this!

Jeremiah adds that this new covenant will be based on “forgiveness of their iniquity,” on forgiveness of sins. Jesus died to take away the sins of the world. All the appearances of Jesus to his disciples after his resurrection were experiences of forgiveness. They had betrayed him, denied him and abandoned him, and must have been afraid of what he would say to them, but when he appeared to them, there was only forgiveness, peace and joy.  Again, what great good news is this?

Jeremiah even goes on to claim that God will “remember their sins no more!” The good news just keeps getting better and better. Apparently, God willingly suffers from a kind of divine amnesia – the ability to even forget our sins and not remember them. That means that when we put our faith in Jesus, repent of our wrongdoing, sincerely confess our sins and receive his forgiveness, they are not only forgiven – as far as God is concerned, they cease to exist. They are gone, wiped away from even God’s memory. Again, what even greater good news is this!

Jolene was a woman who was terribly sexually abused by her father from the age of ten to about the age of thirteen. Being a rather large girl, she finally attacked him one day when he attempted to molest her in the bathroom. The mother called the police and they took her away. She then ran away, got into all kinds of trouble, and became addicted to drugs. Finally hitting bottom, she was guided on a healing journey by a priest. Feeling guilty even after she had confessed all her wrongdoing, the priest crumpled the papers on which she had written her sins, placed them on the altar during a Eucharist they celebrated together, and burnt them at the offertory. He had mentioned to her in the process of her confession that God would forget her sins, but it was not until she stood on the steps of the house, blew on the ashes of her sins and they instantly disappeared, did it really hit her – God had already forgotten her sins, they no longer existed and she was truly set free!

This Good News is a great mystery and a grand paradox that Jesus both lived and calls us to live: when a grain of wheat dies, it produces life; we keep our lives by losing them; it is by serving others and following Jesus to the Cross that we find eternal life; it is by making others happy that we can best find happiness ourselves and the greatest power in the world is not force or violence, but exousia, the power of a child to melt the hardest hearts.

The greatest paradox of all is that Jesus becomes the source of salvation by apparently failing, by being crucified, only to rise from the dead. It is this mystery into which we are called to place our faith, and to live in our own lives.

What gave Jesus the power and the ability to endure his passion and death was his security in the love of the Father, which in this gospel passage is expressed by the voice of the Father blessing him from the heavens, for the second time.

All we need do now is to put our complete faith and trust in Jesus, live out that faith through lives of loving service, and we will experience already the eternal salvation that he alone can give a