The Messiah of God:

In today’s gospel, Jesus poses a question about his identity in the peoples’ eyes to his disciples, and then asks them who they think he is. Peter replies with a very short yet critical, four-word sentence – “The Messiah of God.”

“The Messiah of God” – that sentence leaves us asking the same question – what does it mean that Jesus is the Messiah, and how did he live it out? Bishop Robert Barron can help us answer the first question, and the gospel itself spells out the answer to the second one – through the Paschal Mystery into which Jesus invites us to enter.

Whereas Archbishop emeritus Adam Exner energetically taught us about the two-fold mission of the Messiah, to redeem and sanctify, to forgive and to heal, Bishop Barron stresses four roles the Messiah was to fulfill – to gather, renew, conquer and reign. The long-awaited Messiah of Judaism was to gather all the nations to himself, to renew the temple, to overcome the enemies of Israel, and reign over Israel forever. Jesus, Barron claims, fulfilled all four roles.

Gathering all the nations to himself actually began with John the Baptist. The son of a priest, Zechariah, John should have been ministering within the temple like his father. That he was not, that he was in the desert and that the people were flocking to him to be baptized is like a trumpet blast announcing something radically new was breaking into the age-old traditional religious system of Israel. No wonder the religious establishment in Jerusalem sent envoys to check him out, to see what he was up to.

Jesus picked up where John left off, and continued to gather the people to himself, in the Galilean countryside and not the temple. At times the scriptures take pains to point this out, and at Pentecost, the writers specify people were present from all the known world at that time. As the Messiah, Jesus did gather the nations to himself.

As for renewing the temple, a little background knowledge is needed. When the first temple was dedicated, the shekinah or glory of God was so powerful the priests could not even enter the temple. But in the time of Ezekiel, the temple sacrificial worship system had become so corrupt the shekinah or glory of God lifted up and abandoned the temple (Ezekiel 11:22-23). Then came the destruction of the temple and the exile. When the second temple was dedicated, the glory of God did not return, which always bothered the Jews. That led to the ascendancy of the Pharisees, who thought if they kept the law perfectly, the glory of God would return.

When Jesus entered the temple, he saw that same corruption of gouging the poor, and cleansed the temple, referring to the temple of his body. At Pentecost, the glory of God did return, not to the physical temple, but as fire and wind upon the small band of believers, the early church. So, we are now the new Israel, the temple of the Holy Spirit, and Jesus did renew the temple – just not in the expected manner.

With regard to conquering the enemies of Israel, Jesus did overcome not the despised Romans, but the real enemy of Israel and indeed all of humanity – sin and death, by his resurrection. And we know Jesus is now Kyrios, the Risen Lord, reigning not just over Israel, but over all of his creation. So, in the end, Jesus is the Messiah who fulfilled all these roles.

The gospel ends with Jesus predicting his own passion, death and resurrection. That is how the Messiah would fulfill all these roles – again in an unprecedented and unexpected manner – through his suffering. The pattern Jesus left us was passion, death, resurrection, appearances to his friends, ascension into heaven, and finally the sending of his Spirit at Pentecost.

This is the pattern that we, his disciples, are invited to live out as well, if we are to truly be his disciples, take up our cross and follow him. Our passion is the hurt we all experience early in life – no one gets through this life without being hurt. Our death is the losses we have experienced because of those hurts. Our resurrection is the fact we are still here, alive although many of us are survivors. But God doesn’t want survivors, God wants thrivers. We have to follow Jesus into the next stage of the appearances, which for us becomes mourning and grieving our losses. This is what Jesus was teaching Mary Magdalene to do when he told her not to cling to him (John 20:17). The ascension becomes for us forgiving those who hurt us from the heart, apologizing to anyone we have hurt, and seeking to be reconciled and at peace with everyone in our life. Then we become mellow and are living in the kingdom of heaven already, filled with the Spirit of Pentecost. The key to all this is to accept suffering in our lives without bitterness or resentment, just like Jesus on the cross who was forgiving those who were crucifying him. 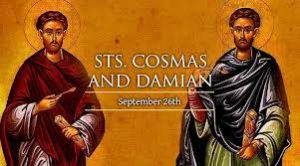 Two New Testament persons who lived the gospel fully are St. Cosmos and Damian, whom we honour today. Legend suggests they were twins, both physicians who practiced without charging fees, and who suffered martyrdom during a period of persecution. Around this legend grew another – a gruesome story of their suffering as well as a history of miraculous cures. After Emperor Justinian I claimed to have been cured of illness through their intercession, he honoured the city of Cyr, which had the relics of the saints, and encouraged devotion to them. In the 16th century, both an oratory and a basilica were built in their honour. Along with the apostle Luke, Cosmos and Damian are patron saints of physicians and surgeons.

The Eucharist, a priceless gift given to us by Jesus the Messiah, is our synagogue and temple sacrifice rolled into one liturgy. We listen to God’s word and are nourished by the body and blood of Jesus, who revealed to us the depth of the Father’s love.

May our celebration deepen our faith in Jesus, our commitment to the church, and empower us to follow Jesus into the Paschal Mystery, loving others as he has loved us.