Taking up the Cross and Living Calvary in Slow Motion: 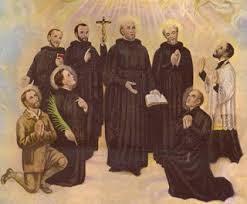 The feast we celebrate today is a significant feast for the Canadian Church, evidenced by two readings plus the Gospel. We are honouring the eight martyrs of North America who died between 1642 and 1649. All originally from Europe, they were on fire to spread the love of God and faith in Jesus Christ to the First Nations and showed great courage in facing death. They were aware of the dangers – some had been captured and escaped, but then returned to face possible martyrdom. The first group in the States was the Jesuit priest Isaac Jogues and two laymen. The second group in Canada included Jean de Brébeuf and three companions, all Jesuits. Shrines have been built in their honour at Auriesville, NY and Midland, ON. The latter shrine was visited by Pope JP II during his first trip to Canada.

This feast and these men who sacrificed their lives for the sake of the gospel are an invitation for us to also be martyrs, if not by our death, at least by our willingness to take up our Cross and live Calvary in slow motion.

Living Calvary in slow motion is what St. Paul is writing about in today’s second reading. Here he who would die a martyr’s death, describes how the apostles were already living Calvary day by day – afflicted, perplexed, persecuted, struck down, yet never overcome. They were carrying the death of Jesus in their bodies so the resurrected life of Jesus might also be made visible in their bodies. St. Paul could not, not proclaim the Good News, whatever the cost to him. He lived Calvary in slow motion during his lifetime, and capped that life by dying physically as a martyr.

In the Gospel, Jesus gives us the same message with different terminology. We are to deny ourselves, take up our cross every day and follow him, willing to lose our life for his sake, and not be ashamed of proclaiming our faith in and love for the Son of Man. Following Jesus means living out a generative discipleship – giving our lives away. It was Winston Churchill who said, “We make a living by what we get, but we make a life by what we give away.” To follow Jesus is, as he puts it, to lose our lives so that we can save them. The disciples of Jesus must be rooted in his teachings and in a profound relationship of love and faith in him, to be able to witness to him and work for justice fearlessly.

Jesus’ words to not be ashamed brings to mind an incident involving my brother and me on vacation while dining at a restaurant in New Orleans. We made the sign of the cross and said grace discretely, trying not to attract attention to ourselves. Then a group of students from a nearby bible college entered, sat at a table and proceeded to loudly praise Jesus, oblivious to how others in the restaurant might view them. A waitress came up to them, pen and paper in hand, waiting somewhat impatiently to take their order.

One of the students looked up at her, and said loudly, “Hi, we’re heavy into Jesus. Are you enjoying him too?” to which she replied, “No, I’m sorry, I’m Catholic.” The student rolled his eyes with a “That’s what I thought” look on his face. We could have crawled under the table with embarrassment, but also felt guilty at our own reticence to display our Catholic faith more openly. That, too, can be part of living Calvary in slow motion.

The first reading today describes the place of honor the martyrs are enjoying in heaven, a just reward for the sacrifice of their lives here on earth. The Eucharist was their spiritual nourishment giving them the courage to sacrifice their lives.

May our celebration today, by Word and Sacrament, give us that same courage to also be martyrs, if not by our deaths, at least by picking up our Cross and living Calvary in slow motion, always ready to fearlessly proclaim the kingdom of God.