Firing Up Our Baptism:

St. Thomas Aquinas once said, “God is sheer joy, and sheer joy demands company.” That saying is appropriate for us today.

The readings today invite us to put the fire back into our baptism and joyfully build up the reign of God.

Preaching about the reign of God was central not just for Jesus, but also for St. Paul as we see in the first reading (“He entered the synagogue and for three months spoke out boldly and argued persuasively about the kingdom of God.”) The key to that kingdom is living out our baptism in the name of the Lord Jesus.

Water cleans but fire transforms. Fire changes, and water can’t. John can name sin, but he can’t forgive sin. He can tell us what is wrong but can’t cure it. All John does is self-help stuff, what we can do on our own – it is valuable but not transformative. John lays out the path towards the baptism of fire that is transformative, spiritual alchemy. We need John the Baptist to point us to our need for purity of heart; we need the Spirit of Jesus to purify our hearts. John can guide and direct but can’t take away the sin. John the Baptist’s baptism is naming sin, cleansing, making a path. Jesus’ baptism is transforming, taking away sin. We should never confuse John the Baptist (water) with Jesus (fire).

The fire that is in Jesus comes from his relationship with the Father. “I am leaving the world and going to the Father,” he states in the Gospel. That is what the gospel is all about. Jesus lives in communion with the Father, and so must we. St. John, the beloved disciple, is the person with access to Jesus. Peter talks through John at the Last Supper, through the beloved part.

There is a support group for priests, started by priest who couldn’t stop turning towards the old habits he was struggling with. He realized that he needed grace and community to change, to heal and so invited other priests to join him on a healing journey. He needed the fire of the Holy Spirit.

The Quakers are known for what they call “sitting” – they gather and sit in silence, waiting for God to come and do for them what they can’t do for themselves. The Oblates have a tradition of oraison, sitting in silent prayer each day. This contemplation is how we build community at a spiritual level, much more powerful than a psychological process. This is how St. Eugene, found of the Oblates, communed with his Oblates around the world, during his oraison before the Blessed Sacrament. He is an example for us. The book about him by Al Hubenig OMI is entitled Living in the Spirit’s Fire – a very fitting title as this man truly lived in the fire of the Holy Spirit.

Ron Rolheiser OMI gives an example of a seminarian who looked like Mother Theresa. He was very ascetic, studied, prayed, and was committed to social justice. He was a nice guy, all the actions were there, but he sucked the oxygen out of a room and ended up clinically depressed – he was being worn down by water. Mother Theresa by contrast was transformed by fire, bringing energy into a room.

On tha same note, Richard Rohr OFM would say that a young person who tries to be a Mother Theresa is usually on an ego trip or in depression with rare exceptions. Are they worrying the kingdom into birth, or themselves to death by neurosis, he asks? Water won’t turn us into saints! The fire of the Holy Spirit and union with the Father and Jesus will. 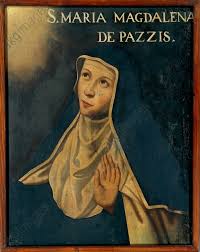 Today the church invites us to honor St. Mary Magdalene de’Pazzi. She was born Catherine, into a prominent family in Florence in 1566. Rejecting her parents’ proposed suitors, she convinced her family of her religious vocation and at 17 became a Carmelite nun. Her biography gives a detailed account of her intense spiritual journey with its periods of desolation and ecstasy. Mary Magdalene had the gifts of prophecy and healing. She died in 1607 and her uncorrupted body is enshrined in the convent church. She lived in the fire of the Holy Spirit.

So, as we celebrate the Eucharist today during this last week of the Easter season, let us pray for the fire of the Spirit to help us come closer to the Father and to Jesus; to build community with one another, and to joyfully build up the reign of God here on earth.