ASCENSION OF THE LORD – YEAR A

A woman died and went to heaven. St. Peter met her at the gate, and informed her that she had to spell a word to get in. “What is the word?” she asked. “Love,” St. Peter replied. So, she spelled L-O-V-E and went in. A month later, St. Peter asked her if she could watch the gate, as he was busy, so she did. Suddenly her husband appeared. “What are you doing here?” she asked him. He replied that he had fallen in love with the nurse who was looking after her during her illness; that they had married right after she died. He had given his new wife her golf clubs and her car and really did not have time to grieve much at all. Then he won a lottery and they went on a world tour. Finally, they went on a skiing trip, during which he had fallen, hit his head and here he was. “So how do I get in,” he asked her. She replied that he had to spell a word. “What was the word?” he asked. “Czechoslovakia,” she replied.

On a more serious note, by our lives, we are called to be witnesses to the Resurrection of Jesus Christ and bring together heaven and earth. 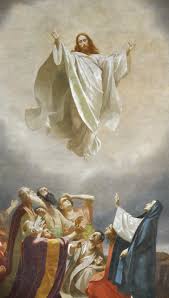 The Gospel passage today is key to understanding the whole gospel of Matthew. It is rich on Christ, the church, salvation history, faith, baptism, morality, our Jewish roots and the Gentile future. After his death-resurrection, the pivotal point of human history, Jesus returns to found his church. He now sends the eleven to all nations, not just the Jews; with baptism, not circumcision as the initiation rite, and with His commands, not the Mosaic law, as final norm of morality.  This is a very creative text coming uniquely from Matthew.

There are three parts to this Gospel: the announcement of exaltation; the mission to make disciples through baptism and teaching; and the final promise of his presence.

The mountain in Galilee, which was his “exile”, now becomes the center of universal salvation. From a high mountain Jesus had refused the temptation to worship Satan, which is the root of addiction. Here, the true disciples are shown in their adoration of Jesus, which for humans always contains some doubt, with Jesus bridging the gap by approaching and speaking words of comfort and commission. This passage affirms the past event of the resurrection, gives a command for the present, and a promise for the future.

Jesus has been given all authority, all power over the whole universe. What all, believers and unbelievers alike, will see at the end of time, the believing church sees and experiences from the death-resurrection onwards – the exaltation and coming of the Son of Man in his prophecy and glory. The church alone experiences this anticipated coming in the present moment, for the church is the only place where the kingdom of God is not only an objective reality but also a subjectively appropriated experience, the only place where the Son of Man not only rules but also is acknowledged, obeyed and praised.

The Jerome Biblical Commentary asserts that the resurrection was not a mere restoration of life nor a mere vindication of the Messiah, but the beginning of a new existence in which the life of the Messiah becomes the enduring life of that group which continues his mission. The Church itself is the witness of the resurrection; for its life and activity are a constant testimonial that Jesus lives.

The mandate given to us by Jesus is very clear: we are to make disciples of all nations, baptize them in the name of the Father, Son and Holy Spirit. We are to join them to a Trinitarian God, and commit them to a radical new way of life: love of enemies, the Beatitudes, and love of God, all others, and self. We are to teach them all the commandments that Jesus gave us, within the assurance that he will be with us always.

It is the gift of the promised Holy Spirit that empowers us to be his witnesses. In the second reading, St. Paul prays that the Father of our Lord Jesus Christ might give the Ephesians a spirit of wisdom and revelation, an immeasurable power to them (and all) who believe. They are to have hope in a glorious inheritance with all the saints as the Church that is the Body of Jesus, the fullness who fills all in all.

Well known preacher and evangelizer, Bishop Robert Barron, would say that in all of this, there is a tremendous bringing together of heaven and earth. When Jesus was born among us, he took on our humanity. When Jesus was baptized in the Jordan, he took on our sinful humanity. When Jesus was lifted up, taken from their sight, something of earth, nature, our humanity has been taken up into the dimension of heaven. The ascension of Jesus means that earth and heaven coming together has commenced. This prompts the coming of a descent of the Spirit from heaven to earth that will be the Pentecost event.  Both the Ascension and Pentecost speak of this revelation.

In the reading from Acts, two men ask why the disciples are standing there looking at the sky? Two angels from heaven have come down to earth to give the commission to go out and get to work, participating in the process of heaven and earth coming together. This is our commission – to bring together heaven and earth, to reconcile the two. This is what the Ascension, Pentecost and the Church is all about.