As young seminarian, I was going door-to-door one summer, promoting the former Oblate Our Family Magazine, when I came across a dejected looking young girl sitting on the front steps of her house. I sat down beside her and asked what was wrong. After moment of silence, the girl replied that her teacher had told her that after we die, there is nothing. “Is that true?” she asked plaintively. Inspired by the nature surrounding me, I asked the girl what happens to the leaves in the fall. “They die and fall to the ground,” was her reply. “And in the spring?” I prodded. “They come back,” she replied. “And in the fall, what happens to the birds?” I continued. “They leave,” she replied. “And in the spring?” I asked. “They come back,” she said. “So then what do you think happens to us after we die?” I gently asked. “We come back,” she almost shouted, jumped up and ran away to play.

The Word of God today invites us not only to believe in the resurrection, but to experience it in our daily lives.

The story of the death of the seven brothers in the first reading has a historical basis. Belief in the resurrection of the body is asserted here for the first time (it is alluded to in Job 19:26-27 and Isaiah 26:19). We marvel at the courage and strength of the brothers to face death rather than betray the Law. That strength flows from their conviction that their fidelity will be rewarded by a resurrection from the dead. The righteous will come back to life.

In the gospel Jesus confronts his opponents with clear teachings on the resurrection. He takes that teaching beyond the Old Testament belief in that we rise, not to the same life again, but to a new life. Our bodies will be transformed into spiritual bodies, for all are alive to God. Death, sin and suffering will be overcome. 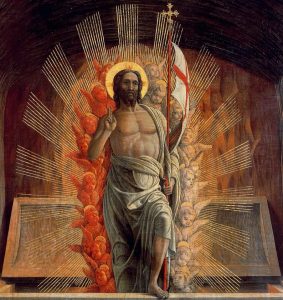 Jesus not only taught about the resurrection, he lived resurrection. During his ministry, he raised people like the widow of Nain’s son, Jairus’ daughter and his friend Lazarus back to life. However, that was more like resuscitation, as they returned to the same life they had before and would have to die again. Then he himself rose to a new, divine life through the power of the Spirit, in the resurrection of his own body. It is this new, eternal life that he wants to share with those who believe in him and do his will.

St. Paul in the second reading draws out the deeper meaning of this new life in Christ. He tells us that the grace, the power of God, the Spirit of the Risen Lord, protects us from eternal harm. That power has rescued us and redeemed us from the power of sin. That same grace or spiritual power comforts and directs our hearts and strengthens us to serve others and to do good. Truly this is to already experience the resurrection and live as people destined for resurrection.

The New Interpreter’s Bible comments that God, who created human life, including the institution of marriage, has also provided for life after death for those who have cultivated the capacity to respond to God’s love. The biblical teaching is that life comes from God. There is nothing in or of the human being that is naturally or inherently immortal. Life beyond death is God’s gift to those who have accepted God’s love and entered into relationship with God in this life. They are “children of God, being children of the resurrection.”

An atheist philosopher once commented if we Christians wanted others to believe in our redeemer, we should act more redeemed. There is a good deal of value in this criticism. Our faith in the resurrection is meant to be lived-out in our lives, especially by our love for Jesus Christ, our ability to forgive, our joy and peace, and our work for justice.

Jesus spoke words of peace to them, and they were filled with joy. That is because the reign of God is made up of precisely those gifts of the Spirit, a deep serenity in the midst of chaos, and even joy in the face of many difficulties. Peace and joy are genuine signs that we are sharing in the resurrection of Jesus.

In Romans, St. Paul adds that justice is a constitutive element of the reign of God. That justice is a transformed relationship, a right relationship with God, with all others, with ourselves, and with all of God’s creation. There is a saying, “If you want peace, work for justice.” The two truly go hand in hand. To live as a child of the resurrection is to be constantly working for fairness, equality and justice in daily life.

Nettie is a Jewish woman who witnessed hatred and conflict between Catholics and Protestants in Barrie, Ontario as a child. The children went to separate schools and often fought each other, to the point that the schools had different schedules to minimize the time the kids would interact with each other on the way to or from the school. She also experienced cruel anti-Semitism herself on a daily basis and was physically and verbally attacked regularly.

Later on, as a teacher in the same school system, she protested that the Indigenous children were automatically placed in B classes with the slow learners and prevented from sports participation with the other children. A principal’s comment to her complaint was, “That is the way they want it; they feel more comfortable being by themselves.” To her, that attitude smacked of paternalism, justification and rationalization. She refused to be part of any sports program because of this view, did what she could to change those attitudes, and spent many years searching for the root causes of anti-Semitism.

Nettie is like the Canaanite woman in the gospel, about whom Jesus might say, “Even among those who believe in me I have not found such faith.” Let her example stir us to greater action as children of the resurrection.

The Eucharist is truly a mini-Easter, a celebration of resurrection. We listen to the Risen Lord speak to us through the proclamation of the Word. We place our needs before the Father in Jesus’ name. And through the power of the Spirit of the Risen Lord, humble gifts of bread and wine are transformed into the Body and Blood of Jesus, our Risen Lord.

Our celebration today is meant to deepen our faith in the resurrection. It can also help us to experience resurrection in our daily lives through forgiveness and selfless service, in a spirit of joy and peace.