Called to Repent and to Forgive:

“If there is repentance, you must forgive.” Does this statement by Jesus in the gospel mean we don’t need to forgive a person if they don’t come to apologize?

Today readings are an invitation to both repent for our sins, and to forgive those who sin against us.

That quote from the gospel caused some heated discussion between my father and me for years. Every time I mentioned the need to forgive someone, he would claim he did not need to forgive if a person never came to say he or she was sorry. What is the correct answer?

It might help to clarify the terms. The Greek word for sin is harmatia, meaning to fall short of being the person God intends us to be, like an arrow falling short of its target. The Greek word for repentance is metanoia, meaning putting on our highest mind, being the very best person we are meant to me. The sin concerning Jesus in this gospel seems to be harm done to children, certainly relevant in today’s context of sexual abuse scandals of all kinds. Should perpetrators be forgiven or not, if they don’t repent?

Three distinctions are helpful: forgiveness, pardon and reconciliation. Forgiveness is letting go of anger and revenge. Pardon is letting go of legal proceedings. Reconciliation occurs when one party repents along with a sincere apology, request for forgiveness, declaration to change, offer to make amends, and the other party accepts the apology and forgives. One need not pardon an offender, but Jesus does say we must forgive, over and over again if need be. But does that necessitate an apology?

The Corpus theory of biblical interpretation suggests we interpret any line of scripture accurately only in the light of the whole bible. The parable of the Prodigal Son, that I prefer to call the Loving Father and Two Lost Sons, helps us out here. The first son obviously repents and confesses his sin to the Father, who forgives him unconditionally. The elder son, who thinks he has done nothing wrong, but is full of painful emotions like anger, jealousy and self-pity, as well as negative attitudes like stubborn self-will, false pride, self-righteousness, does not repent and ends up arguing with his father. For his part, it seems the father is also forgiving him, coming out to plead with him to come into the banquet celebration.

The loving father in that story symbolizes our loving God, and is a prelude to the what Jesus would do on the cross. The key to this question is Jesus himself, who as the Lamb in the book of revelation is the only one empowered to open the seven scrolls, and thus the ultimate interpreter of scripture. On the cross, no one was saying they were sorry, yet Jesus cried out, “Father, forgive them, they know not what they do.” Mary, at the foot of the cross, was imitating Jesus on the cross, not reacting out of anger, but simply taking in all that violence into her heart, pondering it, and believing God would turn it into something positive, which God did through the resurrection of Jesus to new life.

Actually, every one of the appearances of Jesus to the disciples was an experience of unconditional forgiveness towards the disciples who had abandoned, betrayed and denied Jesus. On top of that, in the upper room, Jesus breathed on them the Holy Spirit, saying he was sending them out as the Father had sent him. They, and we, are empowered to do the impossible – to forgive all those who have hurt us in any way, whether they say they are sorry or not.

Velma was raped by a man when she was fourteen. She later fell in love with his brother, and eventually married him. Her rapist became her brother-in-law, and they lived in the same small community for over a decade. She had an angry edge to her that puzzled me, however, even though very involved in the church. Then when her daughter was thirteen years old, this man’s son, her nephew, sexually molested her. They moved to her home community and I lost track of her. Years later, she called me to inform me in tears that her son had molested her grand-daughter, and fell apart – this was three generations of sexual abuse in her family.

I invited her to do a 12 Step healing journey, which she did. Finally, she was ready to do Step 6 and 7 – communicate her pain to her abuser with love and try to forgive him. I sat with her as she cried her way through her letter, then was shocked when she apologized to him for the way she had treated him for over thirty-five years. Then she got up and gave him a hug. A religious sister who heard her share that story at a 12 Step pilgrimage came to me and exclaimed, “That’s impossible!” I responded it sounds impossible, but I witnessed it. She both forgave, and repented. That was amazing grace, and what is possible when our faith is the size of a mustard seed. 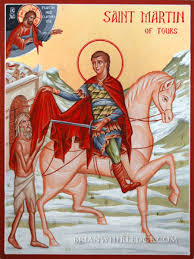 Today the church invites us to honor St. Martin of Tours. Martin was born about 316 in Panonnia, Hungary. The son of an army officer, Marti was conscripted into military service. His parents were pagans but Martin became a Christian catechumen and was baptized at 18. Subsequently, he decided he should not be a solider and became what could be called a conscientious objector. When the ensuing charges against Martin were dropped, he pursued his vocation as a monk.

In 360, Martin settled in Gaul and was soon joined by disciples; together they founded the first monastery in Gaul. In 371 Martin was proclaimed bishop of Tours by the people. He served as a bishop-monk and converted pagans to the faith until his death in 397. His biography, written by his friend Sulpicius Severus, related the many good works and wondrous deeds Martin performed. In art, he is usually depicted on horseback, handing his cloak to a poor man. Martin is patron of France, soldiers and vintners, and a fitting saint for this Remembrance Day, as a reminder for all of us to move towards an end to all war and conflict. 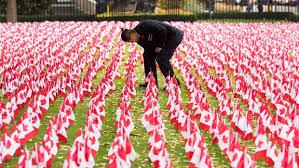 The Eucharist is an experience of the forgiveness and healing of the Risen Lord through word and Sacrament. May it empower us, as it did Velma, to both repent, and forgive all those who have ever hurt us.