Returning to our Roots of Faith

The readings today, and this memorial of St. Barnabas, brings to mind a four-year renewal process we developed in our Archdiocese of Keewatin-The Pas years ago that was designed to involve everyone in the archdiocese. Based on Acts 2:42, we entitled it Returning to Our Roots as it was an attempt to recapture the spirit of the early Church that was dedicated to prayer, the teachings of the apostles, the breaking of bread and fellowship. 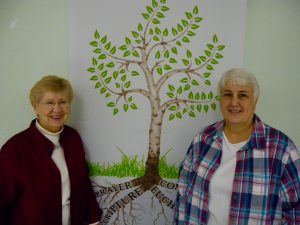 Each year focused on one of those themes (prayer, scripture, the eucharist and community) with the help of a manual of activities developed by Dominican Sisters Susan Gardner and Ellen Kennedy, a banner designed by Roger Jerome of La Ronge, a theme song composed by Deacon Bob Williston, and a prayer crafted by the leadership team.

Our hope was to instill throughout the archdiocese a greater appreciation for the gift of our faith and empower parishioners to live out that faith more fully. That goal is very similar to the gist of today’s readings and memorial.

The first reading takes us to Antioch where the people were hearing about Jesus for the first time (kerygma), coming to believe in Jesus, and “turning to the Lord in great numbers.” Imagine their excitement as they risked danger to form the very first church community there, complete with worship, prayer, fasting and attentiveness to the working of the Holy Spirit in their midst.

The background to this scene is the gospel in which Jesus mandates his disciples to go and proclaim the good news of the Kingdom of God, with a rather radical “ministry description” for them: “cure the sick, raise the dead, cleanse lepers and cast out demons.” In other words, their new-found faith was to make a tremendous difference in their lives and have a major impact on them. They were to trust in divine providence to provide for their needs and be instruments of peace to all they met.

Psalm 98 wraps all this up succinctly: God in Jesus has revealed to the world God’s saving power and victory over evil, and now we are to sing a new song and make a joyful noise before the Lord. 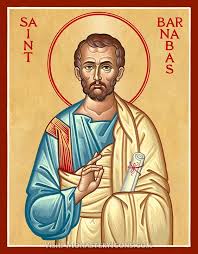 St. Barnabas, whom we honor today, was one who epitomized these readings in his own person and presence. He was a Jew from Cyprus who came to Jerusalem where he joined the Christian community. The apostles changed his name from Joseph to Barnabas or “man of encouragement.” No wonder the reading tells us he “exhorted them all to remain faithful to the Lord with steadfast devotion” or in other words, encouraged them, true to his name.

Our knowledge of Barnabas is recorded by Luke in Acts: he was a good man, full of the Holy Spirit and of faith, and rejoiced in the grace of God at work among the believers at Antioch.  It was Barnabas who accepted Paul into the community after his encounter with Jesus on the road to Damascus.  He was at Paul’s side for many years as his partner evangelizing the Gentiles. Tradition says he was stoned to death in Cyprus about the year 61.

Here is a sampling of his teaching from a letter attributed to him: “Never hesitate to give, and when you do give, never grumble; then you will know the one who will repay you. Preserve the traditions you have received, adding nothing and taking nothing away. The evildoer will ever be hateful to you. Be fair in your judgments. Never stir dissension, but act as peacemaker and reconcile the quarrelsome. Confess your sins, and do not begin to pray with a guilty conscience. Such then is the way of light.”

Another person who epitomizes these readings is Velma. She had been estranged from her abusive partner for years, for her own safety. One day he maliciously verbally abused her over the phone. Formerly, such an incident would have thrown her into total confusion. However, her recent involvement with the church had taught her to “communicate with love” based on the teaching of Jesus in Mt 18:15 (“If your brother wrongs you, go to him alone and tell him how you feel”) and Mt 5:44 (“Love your enemies”). So instead of acting out of anger or stuffing her emotions, she wrote a letter to her ex-partner describing what he had said and expressing her feelings of hurt and anger in a positive manner, with love. Then she went with her daughter to deliver the letter to him at a meeting he was attending.

His reaction upon reading the letter was to stand there, open mouthed and speechless, then he said simply “Okay” and returned to the meeting. Her daughter said with awe in her voice, “Mom.” She had never seen her mother relate to her dad in this way before – it was always a fight. Returning home, Velma was filled with a mysterious joy. Sorting out her emotions afterwards with me over the phone, she realized what she had done it – she had loved her enemy, had communicated with love, had actually forgiven him in the process and was free from anger and resentment.

With excitement, I pointed out she was experiencing the signs Jesus told the disciples would accompany them, very similar to his words in the gospel today: “You will cast out demons, speak a new language, pick up snakes without being hurt, drink deadly poison without being harmed, and heal the sick” (Mk 16:17-18). When Velma decided to forgive her abuser, she cast out the demons of anger, bitterness and resentment. When she wrote that letter, she picked up a deadly snake and it did not hurt her. When she delivered the letter to her abuser, she drank poison and it did not harm her. When she expressed her hurt in the letter with love, without any attempt at revenge or punishment, she was speaking a new language, the language of love – her daughter noticed it and marveled at her. And years later, as he was dying of cancer, she was the one who cared for him, as he had alienated himself from his own family – she was healing their relationship. She was truly a disciple who was experiencing the reign of God and the power of the resurrection in her life that inspired the early followers of Jesus.

The Eucharist is, as Ron Rolheiser OMI wrote, our one great act of fidelity. Ever since Jesus told us to do this in memory of him over 2,000 years ago, we have been faithful to celebrate the Eucharist until he comes again, as did the first believers in Antioch.

May our celebration today inspire us to return to our first fervor and stir up our faith to also be truly dedicated to prayer, the teachings of the apostles, the Eucharist and fellowship, as were the first believers. May we be empowered to become a reason for St. Barnabas to rejoice at the grace of God at work in us as the Body of Christ today.