This motto from the Christopher Leadership Course connects with the message from today’s Gospel Acclamation: “Shine on the world like bright stars; you are offering it the word of life.” 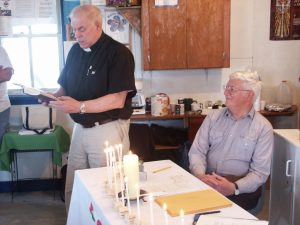 That is what we are called to do: express our faith by shining on the world like bright stars and offer it the word of life!

In the readings today, both St. Paul and Jesus make it clear it is the light of faith and the Word of God we are to radiate in the world. St. Paul speaks of the faith of God’s elect, and the revelation of God’s Word in Jesus. In the gospel, the apostles ask Jesus to increase their faith, and he replies that faith even as small as a mustard seed can move mountains, especially the mountain of anger and the inability to forgive.

We are called to shine our light in a dark world. That darkness is evident in abortion on one end of the spectrum, physician-assisted death on the other, and an epidemic of addiction, corruption, war, poverty, homelessness, unemployment and especially suicides, etc. in between.

In all of this, we are to have faith, shine like stars and offer the world a word of life and hope.

A Lenten mission in an elders’ lodge in Edmonton last year offered me an opportunity to be a shining star and offer a word of hope and life to the elders. In one talk, I spoke about radical discipleship. Radical disciple comes to us when we can no longer do anything, and everything is done to us – usually because of illness, or when there is something in our lives over which we have no control.

The model for this is Jesus, who from the time he was arrested in the Garden of Gethsemane to the time he died on the cross did not really do anything. Everything was done to him, the real meaning of the word passio.

What is key is the way that Jesus went through that suffering – without bitterness or resentment, just forgiveness: “Father, forgive them, they know not what they do.”

In doing so, Jesus modeled for us both radical discipleship and redemptive suffering. If we can accept some suffering and inconvenience in our lives as he did, without bitterness or resentment, then we are already in the kingdom of God, and our suffering can have profound meaning and purpose. That meaning can give us the strength to accept the pain of suffering.

My brother Louis was an example of redemptive suffering. His journey through a four-year battle with cancer was marked by grace, faith and patience. He was grateful for friends, family and all the help he received. Even as he lost his abilities, he would say continually, “Thank you Jesus.” His funeral was truly a celebration of faith. He was like a star shining on the world, offering it a word of life.

Blood and water flowed from Jesus’ side as he hung on the cross. That symbolizes the eternal life that he wants to share with us through the Holy Spirit. Blood and water was flowing from Louis’ side as he lay in the casket. Both his life and his death were an optimal blessing to all who knew him. People went away from his funeral sad because of his loss, but inspired and energized to both live, and die, the way he did. Like Louis, we are called to live, and die, in such a way that both are an optimal blessing to all who know us.

After I explained this to the elders at that elder’s lodge, and shared this story, one elderly lady came up to me to share that she was thinking of putting her name on the list for assisted death, but now she had changed her mind. I was deeply moved, and felt like I was a star shining on her world and offering her a word of life and hope.

We are all called to be like stars shining on a dark world, offering it a word of life and hope.

John, a member of AA on a 12 Step call, was able to connect with a desperate alcoholic about to take his own life, and who was stubbornly resisting the efforts of his wife to get him to a hospital. John looked this man in the eye and thanked him for saving his life that night. Shocked, the man asked what he meant. Jphn told him that he was also an alcoholic, and that he needed to help another alcoholic to stay sober, so he thanked the man again for saving his life that night. The man’s resistance melted away, and he agreed to go to the hospital for that night.

John was like a star shining on the world, and offering it a word of life and hope. He probably saved that man’s life that night.

Sr. Joan was in a mall, tempted to buy a man’s scarf for some reason, when a man approached her and asked her if she was a sister. Suspicious that he was going to ask her for money, she replied yes. The man then asked her if she had a prayer for him. Taken aback, yet realizing that he was sincere, she told him that he didn’t need prayers on paper, he could talk to God and share with God whatever he was thinking or feeling or struggling with, just like talking to another person.

The man’s face lit up, and he said, “Really? I never knew that. I can just talk to God? Wow!” Joan asked for his name, so that she could pray for him. He asked for her name, and told her that he would tell God about her, and went away, smiling and very happy. Joan was like a star shining on a dark world, and offering it a word of life and hope.

The Eucharist is itself like a star shining on us, offering us the word of life and hope. On top of that, we share in the fruit of the redemptive suffering of Jesus for us on the cross – his body and blood.

May our celebration empower us to be like stars shining on the world, offering it a word of life and hope.