Memorial of the Korean Martyrs –

The Grand Canyon is two hundred, seventy-seven miles long, up to eighteen miles wide, and over a mile deep. Water flowing there, over millions of years, has left its mark in layer after layer of rock. How awesome, then, that the writer of Proverbs today likens our hearts to a stream in God’s hands and God turns this stream wherever he wants it to go!

The message for us today is clear: be like a stream in God’s hand, open to be directed by God’s will at the touch of God’s hand, and attentive to the Word of God

.Water is such an appropriate image for life in the reign of God. It is humble, always seeking the lower place. It is persistent, wearing down the hardest rocks over time. It is also a symbol of transformation: once it has served its purpose here on earth, it evaporates and rises to the heavens, only to come back again as rain to serve another purpose here on earth.

To become a stream in the hand of God, sensitive to wherever God wants that stream to go, however, is to be an even greater image of life in the reign of God.

The Gospel tells us how to be that stream. We are to hear the Word of God and do it. A student once asked me why Catholics worshipped Mary when Jesus pushed her and his family away, as we hear in today’s Gospel. I replied that was not the case at all. Jesus was using his mother as an example to show that those who listen to his Word and keep it, can be closer to him spiritually than his mother who gave birth to him is close to him physically. He was actually honoring his mother and using her to teach us the importance of hearing his Word and keeping it.

Psalm 119 is unique in the scriptures in that every stanza in that psalm except for one has one or more references to the Word of God in it. Today we hear the words “law,” “precepts,” “ordinances,” and “commandments.” “Law” actually occurs three times. Obviously, it was important to the psalmist that we hear the word of God and keep it.

There are so many ways we can be that stream in the hand of God, sensitive to doing God’s will, and one of the best ways is to, precisely, hear the Word of God and keep it. We can keep it by loving others, forgiving from the heart those who hurt us, accepting our losses without bitterness, serving others, helping the poor, working for justice.

The reading from Proverbs encourages us to perform right deeds and reminds us working for justice is better than ritual and sacrificial worship. We are advised to be diligent and wise, and especially to be open to the cry of the poor. And like water, we are to be humble and avoid false pride that is actually sinful egoism. 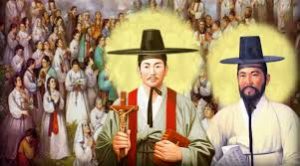 In the early 1600’s, Christian communities began to flourish in Korea under the leadership of lay people. On 1836, missionaries from France, members of the Parish Foreign Mission Society, secretly entered the country. The Christian communities began to encounter hostility and, during the persecutions of the mid-19th century, over 10,000 Christians were killed. Andrew Kim Tae-gôn, the first Korean priest, was one of them and Paul Chöng, a seminarian and catechist, was one of the many lay people who suffered. These and 101 other Korean martyrs, clergy and lay, young and old, were canonized in 1984.

Here is a portion from a letter written by Fr. Andrew Kim, “But as the Scriptures say, God numbers the very hairs on our head and in his all-embracing providence he has care over us all. Persecution, therefore, can only be regarded as the command of the Lord or as a prize he gives. Hold fast, then, to the will of God and with all your heart, fight the good fight under the leadership of Jesus; conquer again the diabolical power of this world that Christ has already vanquished. I beg you not to fail in your love for one another, but to support one another and to stand fast until the Lord mercifully delivers us from our trials. There are twenty of us in this place and by God’s grace we are, so far, all well. If any of us is executed, I ask you not to forget our families. I have many things to say, yet how can pen and paper capture what I feel? I end this letter. As we are all near the final ordeal, I urge you to remain steadfast in faith, so that at last we will all reach heaven and there rejoice together. I embrace you all in love.”

What faith these ancestors in our religion had! We will probably never be confronted with such a test of faith. For us, life will be more like living Calvary in slow motion – living the mystery of the life, death and resurrection of Jesus, daily vindicating who he is as his Body, the Church, by our selfless love and striving to live in his truth.

The Eucharist is based on the blood and water that flowed from the side of Jesus as he hung upon the Cross. Truly Jesus, above all others, was like a stream of water in the Father’s hand, always seeking only to do the Father’s will.

May we, like Jesus, be a stream in the hands of God flowing within the reign of God, sensitive to the will of the Father, hearing and doing the Word of the Lord.