The Dishonest Steward – “What are your Priorities?

The Portugese have a saying: “What is important to us, we find time and money for.”

Where do you spend your time and money? What are your priorities?

Use material things to help the needy, strengthen your relationships and build up the Kingdom of God here and now.

As a careless and self-centred university student, Don foolishly put his own desires first and let a friend down in a joint home-portrait business venture. As the salesperson and proof-passer, he made his money up front. As the owner of the business, however, his friend made money only if the business turned a profit. That never happened mostly because Don was not working hard enough to make it successful. His friend had to declare bankruptcy and literally, as a foreign student, skip the country. His letter to Don some months later telling him that their friendship ended there unless he changed was a much-needed wake-up call to Don. When his friend returned to Canada and started another business, Don worked for him without pay for two months to help him out and make amends. Most important, their friendship was restored and actually became stronger than before.

This experience is similar to the gospel story today. The unjust steward was adding to his commission, putting selfish profit first and sacrificing friendships for the sake of money. A crisis led him to change – to let go of what he was doing, let go of his commission, give the debtors a break and also restore his relationships with his friends. He changed, and started to put people and relationships first. 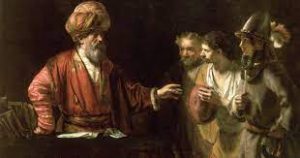 Jesus praises the steward’s action – his conversion, his change of life and his placing people and relationship before profit. This story is a call to us, to individual and social change or conversion. Change and conversion is normal for Christians. The whole basis of our faith (the Exodus and the Resurrection) is dynamic movement of change, and conversion. Here, it is our attitude and actions towards money, possessions and relationships that has to be looked at and changed. Where do we spend our time and money? What are our priorities?

Jesus told this parable to teach us an important lesson about kingdom values. Here is another very similar parable teaching much the same lesson.

A poor man caught stealing was ordered by the king to be hanged. On the way to the gallows he said to the governor that he knew a wonderful secret; that it would be a pity to allow that secret to die with him, and that he would like to disclose it to the king. He was brought before the king and told the king that he would put a seed of pomegranate in the ground and through the secret taught to him by his father, would make it grow overnight. The king agreed, and so the thief dug a hole but then said that the seed could safely be put in the ground only by a man who has never stolen or taken anything that did not belong to him, and that he, being a thief, could not do it. The vizier, frightened, said that in his younger days he had retained something that did not belong to him. The treasurer in turn said that in dealing with such large amounts he might have entered too much or too little; and even the king confessed that he had kept a necklace that belonged to his father. The poor thief then said, “You are all mighty and powerful and want nothing and yet you cannot plant the seed, while I who have stolen a little because I was starving am to be hanged.” The king, pleased with the ruse of the thief, pardoned him.

In this story, as in the parable of the dishonest steward, the central character is accused of stealing and by shrewd actions wins a pardon or commendation from the king/master. The parable turns on the steward’s shrewd response to the urgency of his situation and invites hearers to understand that they are likewise in the midst of a crisis that demands an urgent decision if disaster is to be avoided. Faced with the loss of his position, the dishonest steward acted decisively to provide for his future. One who truly hears the gospel knows that just such a decisive act is required of those who will stake everything on the coming kingdom of God.

The figure of the steward has had a significant influence on Christian reflections regarding the believer’s relationship to God. Disciples of Jesus were expected to be wise, faithful and prudent. Faithfulness, even in small things, was a steward’s highest duty. As St.  Mother Teresa of Calcutta taught, most of us will not be called upon to do great acts of love, but rather to do small daily acts with much love. Most of all, our willingness to use material things to do the will of God and care for others and the Church is what Jesus will take note of and reward with eternal life.

Ed is one such person. He is retired, but one would never know it, as he was almost a full time Church volunteer in a variety of ways – looking after a variety of mission accounts and especially spearheading the Christopher Leadership courses in his area for forty years. He selflessly gave of himself for the good of others before health issues made that impossible.

The Eucharist is a most intimate moment of sharing with Jesus who gave his life for us. This gift of shared life with him is worth more than all the money in the world. Is there anything holding us back from giving ourselves wholeheartedly to him? Is there something we should change in our lives? Now is the time to act.

So, have faith and courage. Trust in the Lord. Let go, and let God. Decide to follow Jesus more closely. Make whatever changes are necessary in your life to do that. And especially, decide to use money and possessions to help others, strengthen your relationships and build up the kingdom of God here and now.