Memorial of Our Lady of Sorrows

A lady at a table in front of me in an airport restaurant, who had been swearing profusely, noticed my cross and starting apologizing profusely for her coarse language. I replied that I had not heard it, but (pointing upwards) said that “he” had. She reacted to that comment with a tirade about her unbelief at any God who could allow so much evil in the world.

The conversation quickly turned to the existence of God. She and her brother were both struggling with lots of suffering in their lives. She had been raped by her cousin when she was seven, and her brother’s wife had deserted him shortly after their marriage, telling him that she never liked his family, taking their two kids with her, and then trying to get as much money out of him as she could. It was obvious that their way of coping was by drinking – she especially was somewhat drunk.

I did my best to speak about free will, that God allows evil to happen but does not cause it, and in the end, can draw good out of any evil. I pointed out that our suffering can have purpose and meaning; that it will make us deeper, and that it can be redemptive. The conversation ended with a promise that I would send her a booklet I had written on the healing of sexual abuse through the 12 Steps of AA.

Today’s memorial is important to us as an example of redemptive suffering, as well as a celebration of the compassionate motherhood of Mary. The fact that there are two choices for a gospel for today suggest that this memorial should be split into two celebrations – one called Our Lady of Sorrow, and the other the compassionate Motherhood of Mary. 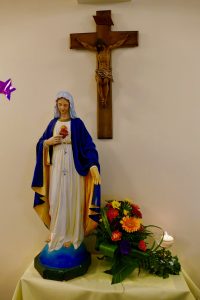 Apparently, it was first called Our Lady of Compassion, then the Seven Sorrows of Mary. This memorial was instituted in 1668 by the Servite Friars in devotion to Mary. In1814 Pius VII extended the memorial to the whole Western Church in commemoration of the sufferings he endured during his captivity in France. The hymn Stabet Mater was written for this feast.

The gospel from John highlights one of the last statements of Jesus on the cross, as he cares for both his disciples and his mother, in giving them to each other as mother and son. Symbolically, of course, John represents the church, which makes Mary our spiritual mother, always there to care for us and to intercede for us, as she did for the young couple at Cana. St. Bernard put it this way: “He died in body through a love greater than anyone had known. She died in spirit through a love unlike any other since his.”

The gospel from Luke, containing Simeon’s prophecy that Jesus would be a sign that would be opposed; that he would be the cause of the falling and rising of many in Israel, and that a sword would pierce Mary’s heart too, puts the emphasis on the sorrows of Mary. Traditionally, those seven sorrows are: Simeon’s prophecy in today’s gospel, the flight into Egypt, the disappearance of the boy Jesus in the Temple in Jerusalem, the road to Calvary, the crucifixion, the removal from the cross and the entombment of Jesus.

The key to giving our suffering purpose and meaning is to accept suffering as Jesus did, without bitterness or resentment. Suffering can make us bitter, or better. It is meant to make us better. There are some lessons in life we will learn only through some suffering. A life too easy, with little suffering, will leave us superficial. It is our suffering that makes us deep and forms our character.

The Eucharist makes present the love Jesus revealed to us on the Cross through his own suffering, and the power of that love to transform suffering into joy and exaltation.

May this celebration of the memorial of both the Motherhood of Mary and Our Lady of Sorrows strengthen both our belief in Mary as our spiritual mother, and our ability to accept redemptive suffering in our life as she did.