The Power of Resurrection – Good News of the Kingdom:

Memorial of Saints Cornelius and Cyprian

Can you imagine a walking band of missionaries of about twenty persons going around the countryside?

Today, we are invited to experience and proclaim the power of the resurrection as the good news of the kingdom of God.

In the gospel, Luke describes Jesus going through cities and villages with his apostles and some women, “proclaiming and bringing the good news of the kingdom of God.”

As the Messiah, Jesus came to inaugurate the kingdom of heaven here on earth, to bring about a truly new world order, a new reality – the possibility of experiencing the life of heaven in our lives today. That has always been difficult for our limited minds and hearts to grasp, and so, two thousand years later, we are still slowly absorbing this astounding development.

We get some idea of the heart of this good news by the fact that the women accompanying Jesus had been cured of evil spirits and infirmities. So, healing of illness and deliverance from the power of the evil one in our lives is one aspect of the good news of that kingdom.

In particular, Mary Magdalene is introduced as one “from who seven demons had gone out.” Those could be painful emotions, negative attitudes, or possibly addictions. At one halfway house for recovering addicts, I met a woman who told me she was addicted to alcohol, drugs, gambling, stealing and compulsive lying. I thought to myself, I have just met Mary Magdalene, only she has two more – perhaps shopping and gossip!

What is important is that for Mary Magdalene, and for all those who believe in him, encountering Jesus, his unconditional love, forgiveness and healing, is good news indeed, bringing about transformation of one’s personality and life-style, as well as filling one with peace, hope and joy. I am firmly convinced the reason Jesus appeared to Mary Magdalene first, asking her to go and tell the others about his resurrection, thus making her an “apostle to the apostles,” was that of all the disciples, she knew him most intimately, who he truly was as the Messiah, because she had experienced his forgiveness and healing the most. As Jesus proclaims in the Gospel of John, it is one who has been forgiven much who can show much love.

For his part, St. Paul in the first reading, focuses totally on the resurrection as the core of the good news of this in-breaking of the kingdom of God, and connects it with forgiveness of sins. If Jesus has not been raised from the dead, “our faith is futile and we are still in our sins,” he proclaims. But, he asserts, Christ has been raised from the dead, the first fruits of those who believe and have died.

What might that look like? When Jesus rose from the dead, he conquered sin and death. And because we are united to Christ in faith, that victory is ours as well. In whatever situation we might be facing, we can hold onto the truth that sin and death do not have the final word in our lives. The power that raised Jesus from the dead is the same power that the Lord wants to unleash in our own lives, giving us the faith and hope to endure and even triumph.

We have all experienced situations that feel like mountains that won’t move. It could be a difficult family relationship, a love one who has strayed from the faith, a struggle with a persistent temptation, or alienation from someone we have unintentionally hurt. But these are precisely the situations in which Jesus wants to bring his resurrection power! He wants to breathe faith, hope and love into or minds and hearts, and to encourage us to not give up believing that he is working, even if we can’t see or sense anything on the surface.

To all appearances, on Good Friday it looked as if all was lost and over – Jesus had been crucified. But then on Easter Sunday, the stone was rolled away from the tomb, and Jesus was raised from the dead!

And because God raised him up, our faith that the tough situations in our own lives can turn around is not in vain. On the contrary, we have the right to hold onto our faith that Jesus can bring good out of any situation. His resurrection is more than a doctrine. It is his power working in our life, even now. 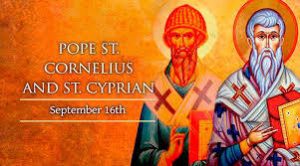 Today we celebrate the faith of two saints who gave their lives for Christ, Cornelius and Cyprian. When Cornelius was elected pope during the Decian persecution (250-51), the Roman See had been vacant for many months following the martyrdom of the previous pope, Fabian. A priest name Novatian tried to usurp Cornelius’ place as bishop of Rome. Cyprian, Bishop of Carthage, supported Cornelius, his friend and ally, and the teaching of Novatian was condemned in a synod. In 253, under renewed persecution, Cornelius was arrested and banished. He died in exile the same year.

Cyprian of Carthage was an important figure of the early church. Brilliant and learned, he became a priest soon after his conversion to Christianity, and in 249 was elected bishop. When the Decian persecution began, he went into hiding and supported his flock by letters. In 257 persecution was renewed under Valerian. Cyprian, one of the first arrested, was banished. In a retrial a year later, he was condemned to death.

The Eucharist is an experience of the good news of the kingdom and the power of the resurrection, as we share God’s word and the same forgiveness and healing Jesus showered so freely on the people he encountered.

May our celebration deepen our faith in the power of his resurrection, and empower us to, like him, continue to proclaim and bring the good news of the kingdom of God to others.