FEAST of the EXULTATION of the HOLY CROSS

Do you know the origin of the symbol on a medical alert bracelet? The readings today provide the answer.

A message provided by these readings is very simple and clear: Look to Jesus; love as he did, and live in the Reign of God.

Today’s feast of the Exaltation of the Holy Cross is like a parable in which two opposites come together to teach a profound truth. How can a cross involving a violent, painful death, be in any way considered a triumph?

The answer lies in part in the today’s reading from the Old Testament. After their miraculous deliverance from slavery in Egypt, the Hebrew people find themselves wandering in the desert. There, they suffer from relapse. They find it hard to understand the mysterious ways of God who often teaches us the deeper meaning of life through some suffering. They complain and want to go back to Egypt, to go back to the familiar miserable old ways instead of moving into the unknown with the Lord.

It is interesting that when Moses prays to the Lord to take away the scorpions that are biting the people, God answers his prayer, but not in the way the people expected. Instead, God instructs Moses to make a bronze serpent, lift it up on a pole, and the people who look at it will be saved, they will live. 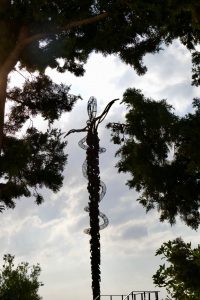 Mt Nebo serpent on a standard

The bronze serpent has no poison in it. What a powerful image pre-figuring Jesus, who has no sin, no addiction in him. Already, centuries before the time of Christ, God was teaching the people to look forward to a savior raised on a cross who would truly save them and liberate them. That is the symbol on medic alert bracelets to this day – a serpent on a standard, a symbol of healing and genuine liberation, taken from Numbers 21:4-9. Without knowing it, many people in our society are carrying around a very Christian biblical symbol.

When the Hebrew people had finally learned some key lessons in the desert, first, to trust in the figure on a cross, and second, to live one day at time (manna in the morning and quail in the evening, without saving any for the next day), they were ready to cross over into the Promised Land.

In the gospel, Nicodemus is seeking some answers to his questions about faith and life as he meets with Jesus under cover of darkness. Jesus gently reminds him of the lesson in the desert that his ancestors learned about a figure to be raised up on a cross, calls him to believe in that figure, and he would have eternal life.

Jesus goes on to tell him that God’s love for us and for him is revealed through the cross, a love that seeks to forgive, to save, to heal, to liberate. It is a love that invites us into the fullness of life with God, not just after death but in the present. Those who truly believe have eternal life here and now.

In doing so, the Son of Man moves between heaven and earth and brings the two together. John has three statements of a “lifting up” that balance the three passion predictions of the synoptic gospels. The overlap of crucifixion and exaltation is critical for John’s soteriology, or theology of salvation. For John, Jesus’ crucifixion, resurrection and ascension are one continuous event. His theology of the cross lies in the fact that there is no exaltation apart from the crucifixion. The Son of Man’s ascent to heaven is salvific, it has saving power, because he is the one who has descended from heaven.

Eternal Life is one of the dominant metaphors in the Fourth Gospel to describe the change in human existence wrought by faith in Jesus. To have eternal life is to live life no longer defined by blood or by the will of the flesh or by human will but by God.

The alternative to eternal life is to perish. There is no middle ground for John. God’s gift of Jesus that culminates in Jesus’ death, resurrection and ascension, decisively alters the options available to the world. If one believes, one’s present is altered by the gift of eternal life; if one does not believe, one perishes. God’s gift of Jesus to the world thus begins the judgment of the world that is not a cosmic future event, but is underway in the present, initiated by Jesus’ coming into the world.

The reader must allow himself or herself to be reshaped by what the text says and does, rather than reshaping the text to fit the interpreter’s needs or preconceptions. This is unsettling, but mirrors what Jesus does in the text. Jesus asks Nicodemus to let go of what he knows in order to be reborn through what Jesus has to offer.

Someone who grasped this mystery of the triumph of the cross has to be St. Mother Theresa of Calcutta. After her death, it was revealed in her letters that she, whom everyone thought must be experiencing the consolation and joy of God’s presence, was for almost 60 years experiencing the “apparent absence of God.” That stark spiritual reality and dryness was a hidden cross that she carried all those years.

This news was shocking to many. Those who do not understand the mysterious ways of God judged her as lacking in faith. To the mystics, however, this would be normal. This testing by God of the genuineness of a faith that does not depend on warm holy feelings, is a grace given to chosen few, the heroes and heroines in the spiritual life. And Mother Theresa was one of them. The rest of us with much weaker faith have to pray, as we do in the Our Father, that God will not “put us to that test.”

The Eucharist makes present for us that same unconditional love of God Jesus showed for us on the Cross through his passion, death and resurrection. By it we are forgiven, healed and sent out to spread this Good News.