Hungering for Justice; Thirsting for Love

One night on television, a news item featured the reality of children starving in Zimbabwe. Pictures of children with extended stomachs troubled the viewers; a few minutes later, another news item dwelt on the problem of obesity among youth in North America. Not surprisingly, the program stated the medical concern that obese children were more prone to heart attacks.

The readings today address both issues with the clear message: we must share our wealth to combat poverty, and learn to love our children again to combat rampant social problems among our youth.

Regarding physical hunger and thirst, Jean-Pierre Prevost, in his commentary on today’s readings in the Living With Christ, provides shocking statistics. In our day and age, he states, some 800 million people still suffer from malnutrition, and 18,000 children die from hunger every day – in a world that claims unparalleled living standards and unmatched technological sophistication.

The prophets of the Old Testament, like Amos, Isaiah and Jeremiah, were quick to denounce the unequal distribution of wealth and food, and so must we. How can we tolerate social and political systems that favour the corporate rich while making life more difficult for the poor? We must, like the Old Testament prophets, work for justice and strive to bring about greater equality in our world. 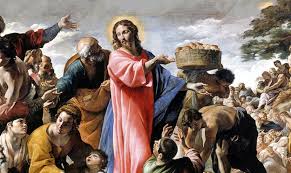 The Oblates of Mary Immaculate started up a mission to Kenya in 1998. Very quickly they realized one of the major needs for the multitudes of poor people living in a mountainous area was the need for clean water to drink and to irrigate their crops. So, they started a water project with the help of Engineers without Borders to bring water down the mountain to the valley below. Working with the people and with international financial assistance, that project is now successfully run by the people themselves and providing water for thousands. The gospel of today is being lived out in Kenya. The Old Testament prophets would certainly approve.

Pope Francis is launching a program to put Laudato Si’ into action throughout church through the Vatican Dicastery for Promoting Integral Human Development. The ambitious church-wide initiative outlines seven categories of sustainability goals to Care for Our Common Home. Church institutions large and small are invited to commit to a seven-year plans toward total sustainability, including becoming carbon neutral and expanding ecological education, in the spirit of Laudato Si. Our new program by the Star of the North, Aurora Living, dovetails beautifully with this Vatican initiative. AL Program Brochure

She sensed that for all too many in our wealthy nation, children were no longer a value, evidenced by the high rate of abortion. Children were being emotionally abandoned and given counterfeit love, so she cried out if the children were not wanted in North America, give them to her and she would find loving homes for them.

This modern plague affects not only the youth. A few years ago, a CBC report stated that 90% of the residents of a particular community in the Northwest Territories were regularly abusing pot as a drug of choice. It had become a way of life.

In one diocese, the pastor has had to deal with an average of one suicide a month in one of the communities where he ministers. Another is very concerned about the deadly reality of gang violence in his community that led to the death of a youth just before Easter one year.

What is this all about? What is going on? In other parts of the world, people are struggling to live yet dying of hunger. In the developed world, people are eating too much yet wanting to end their lives by their own hand. Does this make any sense? I don’t think that the Old Testament prophets had this problem, but I am sure they would have raised their voices in protest and addressed this issue, and so must we.

I believe that there are three deep human needs that are not being met in the lives of many youths and adults in our society today. Those three needs are the need to be loved, the need to belong, and the need to be esteemed.

In one community, a burly fisherman was coming off a drunk. His wife called me to come and talk to him. When I arrived, he was sitting on a couch, surrounded by his three children and wife who all loved him, yet he was crying “Nobody loves me.” His parents both died of alcoholism and he was convinced that he was unloved and unlovable. He was hungering and thirsting for love.

A young girl in Don Bosco Homes in Regina was being beaten up by a motorcycle gang. When asked why she hung out with those people, she replied she had to belong somewhere. She was hungering for real love, for acceptance. That same girl was caught flushing her medication down the drain of a toilet. When told she needed that medication to live, she replied she didn’t care. She was thirsting for real love, for some sense of value and esteem.

The high rate of addictions in our society, the high rate of obsessive/compulsive diseases and suicides, all scream out of a desperate need for love. We must learn to love our children, to love each other, and to love ourselves once again.

The multiplication of the loaves by Jesus and the fragments left over, coupled with his refusal to be branded a political ruler and wealthy king, is a strong statement that He is the only one who can truly satisfy the longings and yearnings of the human heart, as well as the material needs of the people. If we are to call ourselves his followers, we must work for justice like him, and learn to love our children again as he has loved us.

The Eucharist takes on even deeper meaning for us in the context of our modern society facing both the reality of poverty and starvation abroad and at home, as well as the deeper reality of emotional and spiritual thirst for love.

As we are cleansed by God’s Word and nourished by the Body and Blood of Jesus, we are empowered, indeed mandated, to go out and to make a difference in our world, using our gifts, talents and wealth, to work for justice and to learn to love our children once again.