The readings for an optional memorial like St. Josephine Bakhita today vary from year to year, thus presenting a different challenge to a homilist each time.

Within the context of this memorial, today’s readings invite us to appreciate God’s grand plan of bringing about, through his Son Jesus, a new creation more wondrous than the first, as well as our own participation in this plan of salvation.

The first reading from Genesis describes the first four days of that initial creation. What is interesting is the first element described is actually a “formless void of water and darkness.” Within my ministry among the Indigenous peoples, I have often found myself thanking God for the first of all God’s creations, water. Although the reading actually states God created light on the first day, this passage suggests that water may have pre-empted light, if that is possible. Certainly, it upholds the respect I have always held for water within the whole reality of creation.

As part of God’s creation, a large percentage of our bodies are made up of water. According to Dr. Jeffrey Utz, Neuroscience and pediatrics, Allegheny University, babies have the most, being born at about 78%. By one year of age, that amount drops to about 65%. In adult men, about 60% of their bodies are water. In adult women, fat makes up more of the body than men, so they have about 55% of their bodies made of water. So incidentally, our respect for ourselves as human beings also includes respect for water!

The rest of the first reading goes on to describe the creation of light separated from darkness, the sky, earth and plant growth, and finally the sun and moon. Luckily, this is a faith account and not a scientific account, so we don’t have to worry too much about how light could be created before the sun. Suffice it to say that God saw all this creation as good, as very good. So truly, one can say the first bible is creation itself, proclaiming the glory of God, which Psalm 104 proceeds to do for us.

We now fast-forward to the gospel, where it is obvious something went wrong with this very good creation of God, as wherever Jesus went, he encountered suffering, sickness and distress, and people flocking to him for healing: “And wherever he went, into villages or cities or farms, they laid the sick in the marketplaces, and begged him that they might touch even the fringe of his cloak; and all who touched it were healed.”

This reality led St. Augustine to develop the theory of original sin as a logical explanation of this negative aspect of God’s creation. What we see in the gospel is the creator in person, “through whom all things were made” (Colossians 1:16), coming into his own creation to restore that wounded creation to an even greater glory than had Adam and Eve not sinned.

We now have a tension between two theories dealing with the negative aspects of the original creation – St. Anselm’s “substitutionary atonement” theory centered upon the necessity of payment for sin, and Franciscan Duns Scotus’ view of the Incarnation and passion as a “divine epiphany” revealing the depth of God’s love for humanity, claiming that was God’s plan all along.

The fact that healing of illness and disease is the most striking aspect of the presence of Jesus in the territory of Gennesaret seems to lie within the parameters of this second theory of God’s love for humanity. That Jesus, the creator himself, would humbly enter into his own creation as totally one of us, and proceed to restore a wounded and ill humanity to health, suggests that what God is really all about in Jesus is a restoring of all creation to an even more glorious and wondrous reality than the original creation. 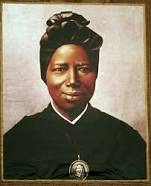 Interestingly, the saint the church honours today, Josephine Bakitha, fits especially the idea of new creation. Slave traders kidnapped Josephine when she was only nine and gave her the name Bakitha which means ‘fortunate.’ While it may seem a cruel choice, in time Josephine came to see beauty in it, stating, “If I were to meet the slave-traders who kidnapped me and even those who tortured me, I would kneel and kiss their hands, for if that did not happen, I would not be a Christian and a religious today.”

Josephine was born in 1869 in the Darfur region of western Sudan. She was sold as a slave several times until 1883, when she was sold to the Italian consul who treated her with kindness and warmth. When he returned to Italy with his family, she accompanied them, and in 1888 she went to live at the Catechumenate of the Canossian Sisters in Venice. She was baptized in 1890, taking the name Josephine.

According to Italian law, since she had reached the age of majority, she was now free. She chose to join the Canossian Daughters of Charity and lived fifty years of religious life in Schio (Vicenza). She led a simple life as a cook, seamstress and doorkeeper, and her gentleness and compassion for the poor and suffering endeared her to all. She is still known today in Schio as ‘our Black Mother.’ She died in 1947, after a long illness, and was canonized in 2000. The first saint from Sudan, Josephine Bakitha is the patron saint of that country.

The Eucharist is a participation today in the heavenly banquet that awaits us in the fulfillment of time. May our celebration of the Eucharist and this memorial of St. Josephine Bakhita, strengthen our faith in God’s unconditional love for us, and empower us to bring that love to the world in humble yet powerful ways like St. Josephine.