Living a Balanced Life of Prayer and Action

Have you ever felt a strong desire to do more for God, to be more like Jesus?

A good place to begin would be with prayer. Today’s liturgy is a strong call for us to balance action with prayer.

Archbishop Fulton Sheen was perhaps the first Catholic television evangelist. His program back in the 50’s was very popular and watched by millions. He was noted for his powerful voice and commanding way of preaching, sometimes giving “chalk talks.” On one show, he unabashedly stated that the reason for the effectiveness of his talks was because of prayer. Every morning he would spend a “holy hour” praying, and he was clear that his inspiring messages came directly out of that time in prayer.

Fr. Armand Nigro is a well-known Jesuit priest who led thirty-day retreats and also mentored older men who were becoming priests. Like Archbishop Sheen, he taught those on retreat the importance of doing a “holy hour” each day, of wasting time with Jesus in prayer. He claimed that one’s ministry would then be more effective and focused.

To round things out, a more contemporary example is Richard Rohr OFM, who founded the Centre for Contemplation and Action in Albuquerque, New Mexico. He makes the same point – we should always strive to balance prayer and ministry in our lives, to avoid pietism on the one hand, and activism on the other. He models that himself by spending Lent annually in his hermitage, contemplating and writing.

According to another spiritual writer, John Shea, the parable about Martha and Mary is about the quality of Christian life, about growing in it, and about the necessity of the contemplative dimension of the Gospel as the means of doing so. When Jesus tells Martha that Mary had chosen the “good portion,” he is telling Martha she needs to find a place in her life for this contemplative quality, that this perspective would lessen her agitation and make her good actions even better. The good portion is the union of contemplation and action.

Shea continues to teach that purity of intention developed through contemplation brings to action the quality of love. Contemplation prevents action from becoming routine. The contemplative dimension of the Gospel perceives in daily life the treasures of holiness hidden in the most trivial and mundane events.

Jesus’ statement, he claims, is a call to both Mary and Martha, not just to Martha. Martha’s activity was good, Mary’s was better, but neither was good enough. Both needed to move into the union and harmony of the two, which is the contemplative dimension of the Gospel. Through contemplative prayer we come under the influence of the Spirit both in prayer and action. Then action is truly prayer. 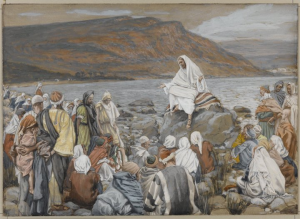 Jesus, in today’s Gospel models this teaching. Jesus leaves praying in the synagogue to immediately heal Peter’s mother-in-law. Then he is kept busy all evening healing the sick of the whole town. Mark makes the point of telling us that this ministry of Jesus was coming out of his intimate relationship with the Father in prayer: “Long before dawn, he got up, left the house, and went off to a lonely place to pray.” It is noteworthy that despite the fact that people were looking for him and making many demands on his time, gifts and talent, he took time to pray, and so must we.

Job in the first reading is another example of prayer. Not just prayer, but prayer in the midst of great suffering, feeling abandoned and hopeless. Yet he prays. His complaint of “morning and evening” is an echo of God’s complaint against the Israelites in the Old Testament who were not faithful to the covenant, and the suffering that infidelity would bring to them: “In the morning they would wish it was evening, and in the evening, they would wish it was morning.” It is Job’s faith and prayer that gave him the strength to endure terrible suffering without bitterness or resentment (the secret of the kingdom). Already Job was a prefiguring of the suffering servant Jesus on the cross.

St. Paul in the second reading is a model of action flowing out of a deep life of prayer. He is able to see his ministry as a duty and responsibility to preach the gospel free of charge. What he received as a gift he gives again as a gift. In so doing he echoes a saying of Pope JP II: “The gift of the Gospel of God’s love becomes our joyful task.”

The Eucharist is itself a balance of prayer and ministry. It is our greatest prayer, but a prayer that involves every participant in a ministry, be it presiding, reading, singing, hospitality, ushering, welcoming – every one present has a ministry. That makes sense because the very word liturgia means “the work of the people.”

This celebration of prayer, of worship and praise, then sends us out forgiven, healed and empowered to spread the Good News of God’s unconditional love for us. We carry out that mission best through lives of action and ministry flowing out of an intimate life of prayer with our God. Then we will truly be the kind of disciples Jesus wants.