Doing the Will of God:

On Feb 28, 1944, a young Dutch woman named Corrie ten Boom and her family were arrested and sent to concentration camps for running a safe house for Jews during the Nazi occupation of Holland. This experience led her to write the book The Hiding Place.

In the midst of great suffering, Corrine’s sister Betsie reminded her that the Scriptures called them to thank God for everything. So they did. They even thanked God for the infestation of fleas in the barracks. As they persisted in giving thanks, they noticed that the guards left them alone. They were able to hold Bible studies and led many fellow prisoners to Christ. They later found out that the guards stayed away because of the fleas.

On one level, this story shows that God works through all things. But on another level, it shows how praising God does something deeper in us. It helps us focus on the Lord so that we can experience his life and freedom more deeply. As Corrie and her sister praised God, they were less concerned about themselves and more able to pay attention to others and their need for Jesus.

The readings today build on praising God in all things, within the context of doing the will of God. In a beautiful prayer, the author of Hebrews asks that God may “make us complete in everything good so that we may do God’s will, working among us that which is pleasing in his sight, through Jesus Christ, to whom be the glory forever and ever.”

The reading adds that we are not to neglect doing good, to share what we have, and to be obedient to our leaders, for such sacrifices are pleasing to God. So according to this reading from Hebrews, doing God’s will is continually praising God, doing good, sharing our possessions and obeying our leaders.

In the Gospel, Jesus models all of this for his disciples, and invites them to go away for a retreat. That too is a special time of praising God. We have much to praise God for – the gift of life; the gift of creation; the gift of love; even the sufferings that come our way that make us deep, and especially the freedom from fear that faith in Jesus and his resurrection from the dead brings. We can praise God anywhere and thank Jesus for who he is and what he has done for us. As Corrie and Betsie ten Boom discovered, the more we praise God, the more God sustains us, no matter how many “fleas” there may be around us. 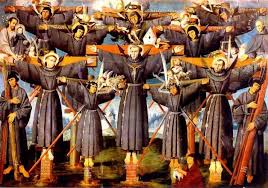 St Paul Miki and his companions

Today the church honours martyrs Paul Miki and his companions. Jesuit seminarian Paul Miki went to his martyrdom proclaiming his faith. On February 6, 1597, he and 25 companions, clergy and lay, were killed for their faith in Nagasaki, Japan. They were suspended on crosses and killed by spears thrust into the heart. Before his death, Paul affirmed his faith in Christ and offered forgiveness to those responsible for his death. This persecution was triggered by a nationalist fear of foreigners: for almost the next 200 years, Japan would be closed to the rest of the world. Despite this isolation, the faith survived without any priests and with only the sacrament of baptism. Paul Miki and his companions were canonized in 1862. Paul Miki is the patron saint of Japan.

Here is an excerpt from the Office of Readings for today: “Our brother, Paul Miki, saw himself standing now in the noblest pulpit he had ever filled. To his ‘congregation’ he began by proclaiming himself a Japanese and a Jesuit. He was dying for the Gospel he preached. He gave thanks to God for this wonderful blessing and he ended his ‘sermon’ with these words: ‘As I come to this supreme moment of my life, I am sure none of you would suppose I want to deceive you. And so, I tell you plainly: there is no way to be saved except the Christian way. My religion teaches me to pardon my enemies and all who have offended me. I do gladly pardon the Emperor and all who have sought my death. I beg them to seek baptism and be Christians themselves.’”

The Eucharist is our greatest prayer of faith and praise. May our celebration today strengthen our faith in God’s love for us, fill us with gratitude and praise for that love, and empower us to see God at work in all the events of our lives, even if that is persecution and martyrdom, as it was for Paul Miki and his companions.