Temples of a Living God:

The late Serge LeClerc was a motivational speaker who gave a keynote presentation at a Catholic Health Conference in Saskatoon years ago. He was born in Winnipeg of a single addicted mother considered unfit by the Social Services System of raising a child, so he was taken away from her and put into foster care. After a series of abusive situations, he rebelled, became a delinquent and turned to crime, eventually running his own gang that got into drugs, prostitution, extortion – anything that would make them money and give them power. Throughout his talk he mentioned he was desperately searching for identity, and discovered he could manipulate even prominent business people because they were also looking for identity. Eventually caught, charged, tried and incarcerated, he had a conversion experience in prison, gave his life to Christ, became a model prisoner, and upon his release, a motivational speaker striving to help other young people not take the destructive path he had been on.

His experience touches on our identity in Christ and the dignity we have as holy temples and spiritual dwelling places for God.

In the first reading, St. Paul goes to great pains to communicate to the Ephesians the grandeur of their new-found identity and dignity in Christ. Formerly aliens and strangers to God, their faith in Christ now places them into one new humanity, citizens with the saints, members of the household of God, connected to the apostles, and above all, a holy temple in the Lord and a spiritual dwelling place for God. They have every reason to rejoice in their exalted identity and the dignity that identity entails.

The Old Testament provides a significant background to this identity as a holy temple and dwelling place of God. The temple in Jerusalem was considered to be where God dwelt among God’s people. At the dedication of this temple, the glory or shekinah of God was so strong the priests could hardly enter. However, during the time of Ezekiel, the temple sacrificial religion had become so corrupt the shekinah, or glory of God, rose up, abandoned the temple and headed to the East. Then came the exile and destruction of Solomon’s grandiose temple.

One of the roles Jesus had as the Messiah was to restore the temple. We read in John how he cleansed the temple, and referred to his own body as the temple to be raised up after three days. He was beginning the restoration of the temple. That was complete when the glory or shekinah of God did return, not to the physical temple in Jerusalem, but to the small band of believers in Jesus huddled in the upper room. In the form of a strong wind that shook the building and flames of fire, the Holy Spirit descending upon each person there and transformed them into the new temple of God through the indwelling of the Spirit of the Risen Lord.

That small band of believers was transformed into the Church, the Body of Christ, temples of the Holy Spirit, charged with continuing the mission of Jesus to communicate the depth of God’s love to the world. These are our ancestors in the faith, the foundation of apostles upon which the church of Ephesus was built, and upon which we now stand as the new temple and dwelling place of God. That is our identity and our dignity, and we are called to live it out.

In the gospel, Jesus instructs us how we can do just that – we are to be attentive to the Spirit, alert, dressed for action, waiting expectantly for Jesus to come again. I believe this means we are to put our complete faith and trust in Jesus, ponder his words through the scriptures, deepen our intimate relationship with him through contemplative prayer, and above all, seek to love one another as he has loved us, and to love even our enemies by forgiving them from the heart, as he has instructed us. 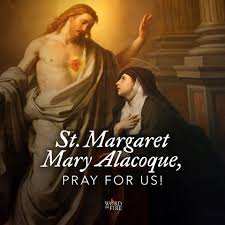 Today the Church remembers St. Margaret Mary Alacoque who was born in 1647 in Burgundy, France, and certainly had not only an intimate relationship with the Holy Trinity, but also acknowledged Jesus in a powerful way. At 14, having been cured of a lengthy illness, she decided to become a nun. It was not until 1671, however, that she was able to enter the Visitation convent at Paray-le-Mondial. Between 1763 and 1676 she experienced four visions concerning the Sacred Heart, and was told to record them by her confessor, the brilliant Jesuit Claude la Columbière. By 1686 the community was also honoring the heart of Jesus, and in 1688 a chapel in the garden was consecrated to the Sacred Heart. Two years later Margaret died, but the devotion she had begun at Paray was now firmly established.

May our celebration deepen our identity and dignity as temples of the Holy Spirit and dwelling places of God, and empower us to share our faith and reason for hope to all we meet, as did our ancestors in the upper room.