Are you singing a new song?

The readings today invite us to sing a new song, with a chorus that could be: “Jesus is risen, the Spirit is given, we are forgiven!”

In the first reading, we see Paul doing what Paul constantly did right after his encounter with the Risen Lord that involved the transformation of his whole belief system and indeed his whole life. From that moment on, he did nothing else but travel the known world singing a new song: Jesus is the Messiah, Jesus is Risen Lord, the Spirit is given, we are forgiven!

According to Bishop Robert Barron, the role of the messiah was fourfold: to gather all the nations to himself; to restore the temple; to defeat the enemies of Israel, and to reign as Lord over all of creation.

Paul realized that Jesus fulfilled all these roles, so he truly was the long-awaited Messiah: Jesus gathered all nations to himself, as people came from everywhere to him, rather than to the Temple. Jesus restored the Temple in his own body that he called the new Temple, raising it up again by his resurrection after it had been destroyed by the crucifixion. Jesus also overcame the real enemy of Israel, sin, suffering and death, through his resurrection. And now Jesus is reigning as Risen Lord over all of creation, through the power of his Spirit.

It is the gift of that same Spirit that would turn the apostles hearts from sadness to joy, as they realized the Spirit was the presence of Jesus within them and within the early Church – the Body of Christ. It is that Spirit at Pentecost that transformed them, like St. Paul. And as Richard Rohr likes to say, “Transformed people transform people!”

That Spirit would be both a witness to the resurrection of Jesus, and a teacher of this new way of life – a life of unconditional love, ability to forgive, redemptive joyful suffering, and profound hope in the future.

Examples of this new life abound: people sober for over 50 years; people who have forgiven their abusers from the heart; people who are willing to die for their faith all over the world; people who serve selflessly and who welcome strangers into their midst – whether from Syria or from Fort MacMurray. The French parish of St. Thomas d’Aquin put great effort into a fundraising concert to help bring two Syrian families to Edmonton – and did so with great joy and love. They were singing a new song.

Roger’s funeral at which I was invited to preside was all about singing a new song. There was sadness because of a great loss, but most of all, there was a sense of joyful celebration of his life, because of the way he sang that new song through his love for his family, friends, relatives, farming and sports, especially hockey. 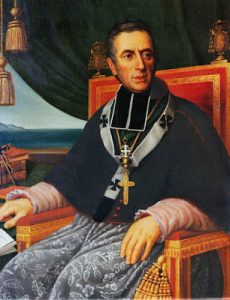 Today the church invites us to honour St. Eugene de Mazenod, founder of the religious congregation to which I belong. Charles Joseph Eugene was born in France in 1782, the only child of wealthy parents. When he was nine years old, the poor and oppressed people of France rose up against the rich aristocracy in the French Revolution. His noble family fled to Italy where they were refugees for eleven years, often in poverty. Finally, his parents separated. Eugene stayed with his father in Italy while his mother returned to France. During this time, however, seeds of a religious vocation were planted in him by a saintly priest, and he was ordained in 1811.

Having learned Provençal from his family’s servants, he was drawn to minister to the poor and the young. Realizing the need for popular missions to reach out to the poor and marginalized, Eugène founded a missionary institute of priests and lay brothers in 1826, the Missionary Oblates of Mary Immaculate, whose particular charism was to evangelize the poor and those who have never heard of Christ. By the middle of the 19th century, in response to requests for help from Bishop Ignace Bourget of Montreal, Eugene daringly sent several of its small number to Canada. Within 10 years of their arrival, the Oblates had covered all of Canada and expanded into the United States.

Eugene became bishop of Marseilles in 1837 and reorganized the diocese, accomplishing great works. A fervent supporter of the papacy in matters of education and infallibility, he continued as superior of the Oblates until his death on May 21, 1861. Eugene was canonized on December 3, 1995. Today, the members of this community minister around the world in remote missions and in education. In Canada, the Oblates established the College of Bytown (which became the University of Ottawa and St. Paul University) and Novalis, as well as numerous parishes and dioceses from coast to coast.

So remember, “Jesus is risen, the Spirit is given, we are forgiven!” Let us be like St. Paul and St. Eugene, and respond to the invitation of today’s psalmist by “singing to the Lord a new song, for he has done marvelous things.”