“You will have pain, but your pain will be turned into joy.”

Today’s gospel invites us into a radical stance towards suffering and pain – to see it as redemptive, full of purpose, and even a source of joy.

Jesus uses the image of childbirth to describe the life of the early disciples as they seek to follow him and form his Body the Church, after his death, resurrection and ascension into heaven.

Velma mentioned at a gathering her faith gave her an incredible peace and even joy that was otherwise unexplainable not only during the pain of giving birth to her children, but later on during the subsequent challenges of raising them and eventually experiencing the break-up of her marriage. The way she put it was that suffering and joy were two sides of the same coin. The saying, “For those who believe, no explanation is needed; for those who do not believe, no explanation is possible” comes to mind.

Along that same line, Eddie, former Oblate and custodian of the Shroud of Turin when it is displayed, tells of a coroner in Los Angeles who upon seeing the shroud, told him the violence of the deaths of the hundreds of bodies on which he had done autopsies was written on their faces. Looking at the shroud, he remarked it was obvious this man had died a violent death, but his face was totally at peace.

Jesus, on the cross, was at peace because he was grounded in his trust in the Father’s love for him and the knowledge that he was doing the Father’s will. One could dare to say, like a mother giving birth, he was even experiencing some joy, knowing he was giving birth to a new way of life, and a new reality, the Church that would be his presence in the world.

Ron Rolheiser OMI teaches to suffer and accept some pain in faith, without bitterness or resentment, is to already be in the kingdom of God. Actually, that is the key to the kingdom.

That truth flies in the face of our modern society that in its lack of faith, cannot tolerate any inconvenience or suffering. Maclean’s Magazine recently carried an article about a man who counsels people considering ending their lives. He tries to remain objective and help them in their discernment, but also provides them with the information they need if they decide to end their lives prematurely. In that article, he admits he and his wife ended the life of their unborn child when they were told this child would be born with medical problems. That is the scenario when there is a lack of faith in the redemptive value of suffering that can even be a source of joy. 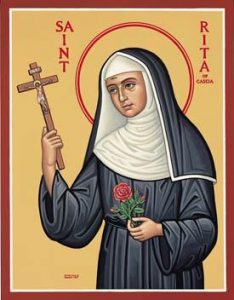 Today the church invites us to honor St. Rita of Cassia, who experienced, and transformed, her share of suffering and obstacles. She was born in Umbria, Italy, in 1386. Although she wanted to be a nun, her parents betrothed her to a cruel, ill-tempered man whom she married at age 18. When her husband was murdered 18 years later, her twin sons were determined to avenge his murder. Rita pleaded with them to forgive the murderers, and her prayers eventually prevailed. Now a widow, Rita sought to enter the convent but was initially refused because some relatives of her husband’s murderers were members. In time, through prayer and her personal intercession, a promise of peace and reconciliation was secured and she was admitted to the Augustinian convent at Cassia, living there 40 years in prayer, contemplation and selfless service of the poor. She was canonized in 1900 and is a patron of impossible causes.

The Eucharist is a gift of love from the One who did not shirk from suffering for us, to the point of offering his life for us.

May our celebration strengthen our faith in that unconditional love, and empower us to accept some redemptive suffering in our lives with peace in our hearts, and even profound joy in our souls.