Last century, there was a great ecclesiological debate in the Vatican to decide which was the greatest male religious order in the world. They were all gathered – Jesuits, Dominicans, Franciscans, Redemptorists, Oblates of Mary Immaculate (OMI), etc. The Holy Father presided at a table on which there was a plumed pen, ink and parchment paper. After many hours of prayer, a hand appeared, picked up the pen and wrote on the paper. The pope picked up the paper and read the words, “The greatest religious order in the world is the Jesuits” to great cheers from all the Jesuits. Then the pope continued, “Signed, God, OMI.”

Today’s liturgy invites us to let go of idols, worship the one true Trinitarian God, and have the courage to endure any persecution that may confront us as a result.

In the first reading, Daniel explains the meaning of the mysterious handwriting on a wall to the king. He is convicted of worshipping manmade idols of silver, gold, bronze, iron, wood and stone. Worse, he is guilty of dishonoring the God of Israel and robbing the sacred vessels from the Temple. For that his kingdom will be taken away from him and given over to his enemies.

Lest we be presumptuous and judgmental of that king, idols and false gods are very much present all around us today. They tend to hover around the three temptations Jesus faced in the desert, and that we face everyday: possessions, prestige and power. St. Thomas Aquinas would add “pleasure” as a fourth. People today are falling for these temptations and false gods by over-attaching to them, perhaps even more than in the days of old, and many are suffering addiction to these idols as an end result.

In the Gospel, Jesus shifts the focus to the end of time, and to the oppression and persecution that will come to true believers in him and the Father, largely because of their opposition to these false gods, or other images of God, that rule over large parts of the population of the world. One only has to think of the atrocities that are being committed against even Muslims but especially Christians who do not comply with the narrow, harsh rigid ideology of fundamentalist extremists such as ISIS. Jesus does not downplay the seriousness of these threats, but does offer a response – to witness to him by our steadfast faith, even to the point of martyrdom.

Today’s Gospel passage describes the persecution Christians face before the end of the world. When will the Church stop being persecuted? When the Lord returns, but not before. 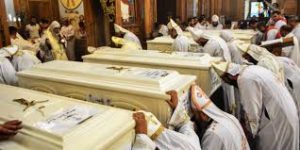 From the earliest days until the present, the community of Jesus Christ has been the focus of the world’s violence. The old principle of “killing the messenger” applies here. The Church will announce, until the end of time, that the old world is passing away, that a new world of love, nonviolence, and life is emerging. This announcement always infuriates the world of sin, which explains why the twentieth century was the bloodiest on record—and the one with the most martyrs.

What do we do in the meantime? We maintain a detachment from the world that is passing away, our eyes fixed on the world that will never end. And we speak confidently, boldly, provocatively the message of the Gospel, the dying and rising of the Lord.

The psalm response, also from the book of Daniel, invites us to a beautiful response: Bless the Lord, and give God glory and praise forever. We are invited to worship the Trinitarian God revealed by Jesus Christ and proclaimed constantly by St. Paul. It is not enough just to worship a monotheistic God, as that is also the religion of Judaism and Islam. Our God is above all relationship, family – three persons in one dynamic loving unity.

I was visiting a family one day when their 15-year old daughter came in from a soccer tournament, threw down her duffel bag, went straight to her dad, sat on his lap, put her arm around his shoulder, laid her head against his and stayed there for a full two minutes, just soaking up his love, all without saying a word. He kept talking to me over her, while his wife carried on making supper and her siblings quietly kept on playing. I felt deeply touched and moved to my depths by this intimate, loving relationship between a father and his daughter.

I felt warm and mellow as I drove away later. Reflecting on that incident, I realized that was probably as close as I will get to seeing God with my physical eyes in this life. What I saw was a father and mother united within a marital commitment. The love between them produces their children, and within this family is love, unity, oneness, intimacy, relationship. That family was to me an image of God who is love, unity, intimacy, relationship and family. And we are given the Holy Spirit to help our families heal and become more like our Trinitarian God, and like this family.

The Eucharist is our greatest act of praise and worship of this Triune God – beginning and ending with the sign of our faith – the Cross and filled with references to the Trinity. We pray the Our Father. We address our prayers to the Father through the Son and the Holy Spirit. Humble gifts of bread and wine are transformed into the Body and Blood of Christ by the power of the Holy Spirit. Truly, this is Trinitarian faith at its best, one that many of our ancestors died for.

So, as we celebrate today, let the faith of our ancestors inspire our celebration, empower us to witness to our faith, and help us to bless the Lord and give God glory and praise forever, by our words and by our lives.