Did you know that Meghan Markle was the most googled woman in the world as of her engagement to Prince Harry? Could that be because kingdoms, royalty, palaces and temples hold out the hope for some enchantment in our lives?

That pales in comparison to the fact that we are all involved in an intimate nuptial relationship with Jesus Christ, and living in his kingdom everyday if we so choose. All we have to do is believe in him, trust in him, do his will and give him praise and glory.

The readings today place before us a tension between external temporal glory and a new, inner more glorious but harder to define reality – a cosmic, tectonic shift that occurred with the resurrection of Jesus from the dead.

The attitude of the first Christians is significant. Bishop Robert Barron points out in today’s Gospel Jesus responds to questions about the end of the world. When will it come? What will happen? Why were the first Christians interested in these questions? The simplest and deepest answer is that they had experienced the end of the world—precisely in the dying and rising of Jesus.

Jesus came preaching the kingdom of God, and the nations conspired against him. The old world seemed to conquer this new world that Jesus embodied. But then, in the Resurrection, they saw that the old world—the world predicated upon death and the world that had done Jesus in—was now defeated.

So awed were they by the Resurrection—and you can sense it in every book and letter of the New Testament—that they awaited the imminent arrival of the new state of affairs, the return of Jesus and the establishment of God’s kingdom. Though Jesus did not immediately return, the old world was over, broken, compromised, its destruction now just a matter of time.

Within this context, the first reading focuses our attention on two key realities – dreams and kingdoms. Gifted by God, Daniel is able to interpret King Nebuchadnezzar’s mysterious dream that is all about his own kingdom, and a series of lesser kingdoms that will follow. Finally, God will bring about a kingdom that shall never be destroyed or overcome, a kingdom that will be eternal. 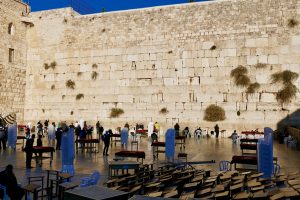 Gathering at the Western Wall

In the gospel, Jesus predicts the end of the Jewish kingdom as it was during his time, including the centrality of temple worship. We know that historically, that temple was destroyed by the Romans in 70 A.D. and never rebuilt. In fact, all that remains of that glorious temple is the Western Wall and the underground foundation stones. Historically, the early Christians were not interested in that location, which is now dominated by the Muslim Dome of the Rock. Instead, they focused their attention on the Church of the Holy Sepulcher, where Jesus was buried and rose from the dead, and where our pilgrimage group was privileged to celebrate the Eucharist in 2018.

By our baptism into Jesus Christ, our faith in him, and our love for one another and the world, we already enter into the reign of God that Jesus came to inaugurate among us. My motto as a bishop is Regnum Dei Intra Vos – the kingdom of God is among you, from Luke 17:21. That is the only place in the New Testament where Jesus does not just say that the kingdom of God is near, or that someone is not far from the kingdom – it is actually a present and very real reality in us and among us.

Daniel’s ability to interpret dreams that was all about kingdoms and finally, the Kingdom of God, reminded me of Dora (not her real name). Dora is a woman who comes for spiritual direction. The first issue she had to deal with was a deep-seated anger and resentment towards another woman who for some reason had it in for her and was acting very hurtfully towards her.

Over many months, when she would come for direction, she would bring some of her dreams that we would discuss and try to interpret. At first those dreams were of a dark and foreboding nature, and seemed to relate to the issue of her anger and need to forgive. Eventually, she was able to do some marvelous inner work, communicate with love to this hurtful person, forgive her from the heart, and begin to experience greater peace and joy in her life.

After a while, I noticed that her every one of her dreams related in some way to either the challenges she was facing, or the progress that she was making. Recently, her dreams were simpler, lighter and all about searching for something like a purse or a member of her family. We were able to discern what she was really looking for was intimacy – she had never experienced that in her family or her social circle. Now, in her twilight years, she had the opportunity to move towards intimacy with a friend who appreciated their friendship and, I believe, experience more deeply, life within the kingdom of God.

Actually, if purgatory is the pain of entering heaven, and a letting go of the things of the earth, she has been doing her purgatory here on earth, by dealing with her issues and not shirking them. For her, dreams and the kingdom of God came together, very much like Daniel.

The psalm for today describes what we will be doing in the fulfillment of the kingdom – glorifying and praising God. We are encouraged to do that now, as part and parcel of living in the reign of God.

The Eucharist is our wedding banquet with the Lord – not just once like Prince Harry and Meaghan, but every day.

May our celebration today strengthen our faith in Jesus as Lord and Savior, empower us to do his will, love one another as he has loved us, and continually give him glory and praise as we live in the Kingdom of God and wait for it to come in its fullness.