How strong is your faith? What difference is it making in your life?

The readings today invite us to pray for a faith in Jesus Christ that will allow us to weather any storm and stand tall before our God.

In the passage today from the Book of Daniel, commonly known as Daniel in the Lions’ Den, we are shown the two sides of faith. On the one side, there is Daniel’s unflinching faith in the one God of Israel, and on the other side, the spurious faith in the many gods of the pagan world.

The readings of the past few days have been highlighting Daniel’s faith in the one God of Israel, and his unswerving fidelity and adherence to the tenants of that faith, both dietary and in terms of prayer. Refusing to eat the king’s rations, he and his companions prospered and rose in stature in the kingdom and favor with the king. In today’s passage, he is called out to the king precisely because of his fidelity to prayer and worship of the God of Israel, and thrown to the lions. 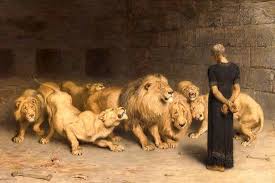 That story also highlights the dark side of faith in the pagan gods and also in the false gods that confront every one of us every day: over-attachment to possessions, prestige, power and pleasure. The presidents and the satraps who were over-shadowed by Daniel, in their insecurity and jealously, conspired against Daniel and plotted to get rid of him by complaining to the king.

In the end, Daniel is vindicated in his faith, and the king, who had done all he could do save him, is led to proclaim a royal decree praising the “God of Daniel.” That wonderful act of faith, however, is marred by the harsh reality of retributive justice going along with it – those who accused Daniel, their innocent wives and even their children, were thrown into the den of lions and devoured by them. There we see the whole circle of a weak faith in the false gods of this world – individuals who are insecure which expresses itself in narcissism, selfishness, false pride, jealousy, hypocrisy, competition, etc., and social and political systems that are corrupt, dominating, unjust and unfeeling.

In the Gospel, Jesus predicts the destruction of Jerusalem, as well as the end of the world, and all the signs that will accompany both events. Interestingly, he also commands the righteous to stand up, hold their heads up high, and be confident, for at that time and during those events, the fullness of their redemption is at hand.

We are to have the faithful attitude of Daniel, who practiced his faith fearlessly in the sight of the other jealous staff of the king, and the threat of death – a faith that was rewarded by being saved from the lions. It also led to the conversion of the king and also all the kingdom. The king needed to take one further step to make his conversion more complete – to move towards a practice of restorative justice that seeks to restore relationships through forgiveness, healing and making amends, rather than a blind retributive justice that so often swallows up the innocent in its wake.

Our attitude is also to be that of the psalm response, also from the book of Daniel. We are to bless God, and give God praise and glory at all times and forever. Being grateful and blessing God always keeps us connected to God’s goodness, grounded in God’s love, and more able to deal with the vicissitudes of life.

Henri Nouwen offers this reflection: “When Jesus speaks about the end of time, he speaks precisely about the importance of waiting. He says that nations will fight against nations and that there will be wars and earthquakes and misery. People will be in agony, and they will say, ‘The Christ is there! No, he is here!’ Many will be confused and many will be deceived. But Jesus says, you must stand ready, stand awake, stay tuned to the word of God, so that you will survive all that is going to happen and be able to stand confidently (con-fide, with trust) in the presence of God together in community (see Matthew 24). That is the attitude of waiting that allows us to be people who can live in a very chaotic world and survive spiritually.”

One of the ways we can wait is through contemplative prayer, just spending time in the presence of Jesus, allowing him to speak to us in the silence of our hearts, to pour his Spirit into us, to heal us at a deeper level than any psychology, therapy or counseling can go. Members of our Basic Oblate Community gathering recently shared their experience of sitting in silence, being attentive to their breathing, opening themselves up to the gentle whispering of the Holy Spirit, and the benefit that was bringing to them.

When the turmoil, chaos and instability of this world threatens to overwhelm us and it seems like the end of the world, Jesus instructs us to “Stand up and raise your heads, because your redemption is drawing near.” As the Messiah, Jesus had a two-fold role – to redeem and to sanctify, to forgive and to heal. If we come to him in faith, receive his forgiveness for all our sins and healing of all our painful emotions and negative attitudes, then we are already in the kingdom of God, and what have we do fear? We are grounded in his love, and able to be a still point in a turning world.

An example for us of being that faith-filled still-point are Delma and Henry during a visit to their son and daughter-in-law who at that moment were undergoing a stressful and chaotic time in their lives. What their strong faith offered their grandchildren at that moment was a presence that communicated safety, assurance, security and a sense that everything will turn out for the best. They were even able to get caught up in play with their grandchildren, which turned out to be a blessing for them. In this unique way, they were standing tall and holding up their heads, because their redemption was very near.

The Eucharist is an act of profound faith and genuine gratitude – our greatest prayer of thanksgiving to God for all God’s blessings. May our celebration today strengthen our faith to be like that of Daniel, and empower us to bless God and give God glory and praise all our days, in all circumstances of our lives.