A message offered us by the movie Dead Poet’s Society is Carpe Diem – to grasp the day, to make the most of our time each day.

Our liturgy today in this final week of ordinary time encourages us to make all our time here on earth quality time.

Every once in a while, we hear of “end times” scenarios which seem to stir up a certain excitement, buying of provisions, building of bunkers, etc. Our faith can free us from any such concern with its invitation to always be ready for the end times by living within the kingdom of God each and every day.

Richard Rohr OFM, spiritual writer and speaker, offers us a very helpful insight into making the most of our activities – “The way we do anything is the way we do everything.”  So, changing one thing in our lives can influence everything else we do, and help us to better “Carpe Diem.”

According to The Word Among Us, Jesus inaugurated his kingdom when he came on earth, and now asks us to work together to build a better world, in whatever area he is calling us to do that.

God doesn’t want us to live in fear. God wants us to remember that he is not only just but merciful as well. As long as we stay close to the Lord, we have no reason to be afraid. Instead, we should see Jesus’ coming as a sign of joy and the promise of our final, glorious rescue. In spite of the darkness around us, we can place our hope in him and look forward to the reign of God when all things will be put right.

The Church provides us with a fitting model today, St. Cecilia. She was a woman in Rome who came from a very rich family and was given in marriage to Valerian, whom she converted. As her husband and brother-in-law buried the dead, St. Cecilia spent her time preaching and in her lifetime was able to convert over four hundred people, most of whom were baptized by Pope Urban. 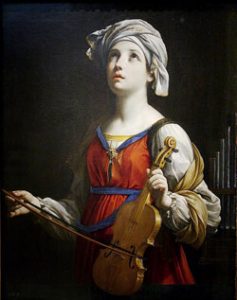 A few days after her husband Valerian and his brother Tiburtius were beheaded for refusing to sacrifice to the gods of the Romans, Cecilia was arrested and condemned to be suffocated in the baths. She was shut in for one night and one day, as fires were heaped up and stoked to a terrifying heat – but apparently Cecilia did not even sweat. When Almachius heard this, he sent an executioner to cut off her head in the baths. The executioner struck her three times but was unable to decapitate her so he left her bleeding. Crowds came to her and collected her blood while she preached to them or prayed. Three days later, she died and was buried by Pope Urban and his deacons.

Honoured since the early years of the Church, Cecilia is mentioned in the list of saints in the first Eucharistic Prayer.St. Cecilia is regarded as the patroness of music, because she heard heavenly music in her heart when she was married, and is represented in art with an organ or organ-pipes in her hand. Officials exhumed her body in 1599 and found her to be incorrupt, the first of all incorrupt saints. She was draped in a silk veil and wore a gold embroidered dress. Officials only looked through the veil in an act of holy reverence and made no further examinations. They also reported a “mysterious and delightful flower-like odor which proceeded from the coffin.” St. Cecilia’s remains were transferred to Cecilia’s titular church in Trastevere and placed under the high altar. In 1599 Cardinal Paolo Emilio Sfondrati, nephew of Pope Gregory XIV, rebuilt the church of St. Cecilia.

When in Rome for the canonization of the founder of the Oblates of Mary Immaculate in 1995, St. Eugene de Mazenod, I visited the catacombs and was struck by a statue of her lying on the ground in the catacombs, a scar on her neck, dying for her faith, in the spirit of the Maccabees.

Celebrating the Eucharist, our greatest prayer and our one great act of fidelity, as Ron Rolheiser writes, is truly living out Carpe Diem, making great use of our time.

So remember, Carpe Diem – let us strive to make all our time quality time living in, and building up the kingdom of God.