Giving All to Christ:

The Presentation of the Blessed Virgin Mary

The message of the gospel today is to put our complete faith in Christ; to surrender to him totally.

It is interesting that in one translation, Jesus looked up and saw or watched rich people put donations into the treasury, but he noticed the poor widow put in two small copper coins. She caught his attention, because unlike the others, her trust was so great she put aside all concerns for shelter, the next meal, etc., and gave from what she had to live on. That is in stark contrast to those who walk away from the church out of some snub, or conflict, or inability to accept the brokenness of the church. It is as if she was saying by her gesture, “Lord, it isn’t much, but it’s all that I have. Take it, Lord, because you’re worth it. I give you my whole being.”

In one sense, the two coins represent us. One can be our mind and heart – the other our body and spirit. We are to surrender both to our God. The background to this is the First Commandment (You shall have no other god before me) and the Great Commandment (We must love God with our whole mind, heart, soul, and strength). Jesus doesn’t want part of us – he wants all of us. He wants us to trust him completely, to make him the center of our lives, not just one of our priorities. He wants us to walk in an intimate relationship with him as our best friend.

A young man asked his friends if they believed he could push a wheelbarrow on a high wire over Niagara Falls. They didn’t and said no one could do that. He proceeded to set it up, and pushed a wheelbarrow over Niagara Falls. Then he asked his friends if now they believed he could do that? They replied, yes, they had seen him do it. He then said if they really believed, get in and he would give them a ride!

This is the faith of the widow putting in two small coins – all she had to live on. Her trust in God’s providence was complete. Our belief must move to faith in a person, to trusting that person, to surrendering our lives and wills to God, to getting into God’s wheelbarrow and going for a ride wherever God wants to take us. That is the faith Jesus wants and looks for.

We are to have no false gods in our lives, which are an obsession with possessions/pleasure; prestige/fame; power and control. Thomas Keating puts it slightly different – we are not to have an overly great attachment to the emotional programs for happiness of our childhood that don’t work any more – survival and security; affection and self-esteem, power and control.

When Robert burnt out because of work-a-holism, he was shocked when a fellow resident at a therapeutic centre for clergy and religious claimed he was breaking the first commandment, because his god had become obsessive-compulsive work. Actually, any addiction can easily become a false god.  One tall, husky man told me he was six feet tall, and his boss was eight inches high – a bottle of beer.

The widow also can be seen as a foil for the woman who poured expensive nard over Jesus’ head and anointed his body, scandalizing the onlookers. Hers was an extravagant gesture of generous trust, pouring out the whole contents, that Jesus defended, for that gesture of intimate love, tenderness and touch would give him strength to face the cross. As he said, she was preparing him to face his death.

The widow’s generosity, giving all that she had, is also a prefiguring of what Jesus would do in his passion, give his life for us, give all he had, back to the Father. And that is what we are invited to as well, to imitate both this widow and Jesus, in giving all that we have to him in faith and trust.

There are two saints we can highlight in this regard – Kateri Tekakwitha and St. Jean Vianney. Kateri gave her life completely to Christ, and her small-pox scarred face was instantly healed at the moment of her death. A miracle of healing for a young Finkleburg boy with flesh-eating disease led to her canonization. St. Jean Vianney had a philosophy of giving everything away, a poor priest who became a renowned confessor for all of Europe. I have a relic of each we venerate in rituals during missions. 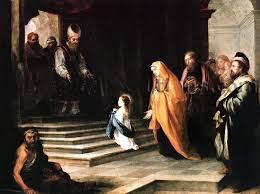 Today we celebrate the memorial of the Presentation of Mary in the Temple, which originated as a commemoration of the dedication of the Basilica of St. Mary the New in Jerusalem in 543. An apocryphal account recounts that Mary’s parents, Joachim and Anna, brought Mary as a three-year old child to the Temple in Jerusalem to offer her to God, as was the custom. Inspired by a priest’s vision, they left her there to praise and serve God. The much later presentation of Jesus in the Temple serves as a background: while the offering of the poor, two turtle doves, were offered, really no offering was needed as Jesus was himself the Temple. This memorial spread to the Western Church in 1585, and honors Mary as a temple where God lives, so for her as well, no offering was necessary.

There is a tabernacle in the Blessed Sacrament Chapel in the Oblate Parish of Our Lady of Guadalupita in Mexico City that captures the reality of Mary as a Temple in which Jesus abides. At the Annunciation, through her Fiat, she became the Ark of the New Covenant, in which the Word of God dwelt. Her Visitation to her cousin was actually the first Eucharistic procession, journeying with her unborn child Jesus. The unseen presence of Jesus in Mary’s womb caused his cousin John the Baptist to leap with joy in the womb of his mother Elizabeth, who also cried out with joy at the wonder of Mary being the mother of our Lord! We are reminded that we also are meant to be temples where the Lord lives, offering our lives to the Lord.

One way we already taste that heavenly goal is to celebrate the Eucharist. We experience forgiveness by listening to God’s Word; we experience healing and transformation by receiving the Body and Blood of Jesus. And like the widow, we are making Jesus the centre of our lives just by being here.

Finally, we are missioned and sent out to spread the good news of Jesus’ unconditional love for us, and the importance of making him the centre of our lives like the widow in the gospel.