Jesus the Whistleblower and Servant Leader:

The reality of whistleblowing is very much present in our day. Julien Assange, founder of Wikileaks, is facing legal challenges. Some time back three women were featured on a Maclean’s magazine cover because they were whistleblowers, pointing out injustice. Whistleblowers tend to suffer because they are confronting powerful corrupt and unjust systems

Jesus is the whistleblower in the parable today, in which Jesus uses irony and satire to make a point – he will be a different kind of king. Let us believe in him, follow him and imitate his way of servant-leadership.

This parable is difficult to understand because we are used to reading it in the light of the parable of the Talents in Matthew. The parable causes dissonance because it invites reflection on Jesus’ role as a king, when kings were uniformly corrupt, greedy and violent. Jesus’ disciples can neither follow such a king nor understand their role as stewards or slaves of such a king.

The value system of Jesus’ kingdom is diametrically opposed to that of the king in this parable. On the other hand, the law of retribution still applies, for those who serve God faithfully will be rewarded and those who resist God’s kingdom will perish. The parable calls for faithful allegiance to a king whose kingdom is opposed to the quests of earthly kings for vengeance and profit at the expense of the poor. We too must protest when the rich resist justice for the poor and take wealth for themselves. “But Lord, they already have enough!”

This Lukan parable contrasts the coming of the kingdom of God with the typical pattern of the establishment of a political kingdom. Thus, the greedy and vengeful king of this parable serves as an antitype for Jesus who humbly enters Jerusalem as “the king who comes in the name of the lord.”

The parable uses a familiar cultural pattern: 1) A throne claimant travels to Rome to seek the title of king; 2) the citizens of the country send a delegation to oppose him, and 3) when the throne claimant returns, he rewards those who have served him well and slaughters his enemies.

Such was the case with Herod, his son Archelaus and Antipas, who were entitled and returned to slaughter their enemies; and even the unsuccessful attempt by Herodias and Agrippa. Historically, Archelaus went to Rome in 4 BCE to assure succession to his father Herod’s throne – his mission was opposed by a delegation of leaders from Judea.

A peaceful transmission of power was probably rare in those days – perhaps slightly reminiscent of what is happening in the United States presently. Thus, in the gospel the nobleman represents neither God nor Jesus. Rather, the greedy and vengeful nobleman serves as the antitype for Jesus’ kingship.

King Herod is seen as the nobleman who did wicked things. The parable invites reflection on what it means to claim Jesus as “the king who comes in the name of the Lord.” In Jesus’ kingdom the standards for reward and punishment are reversed. The enemies of the kingdom will be punished, but in God’s kingdom the greedy will be driven out of the Temple and the generous will be rewarded. The parable of the vengeful king graphically reminds the crowds in Jericho that the kingdom has not yet come.

The protest of the bystanders is a call for justice and encouragement for those who are committed to God’s kingdom to join the bystanders in opposing the wicked king. The protest against the nobleman leads to the fulfillment of the common proverb that “the rich get richer and the poor get poorer.” That makes the nobleman worse than a chief tax collector. 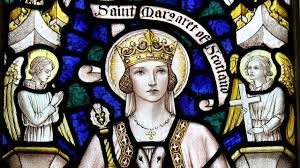 The optional memorial for today is for St. Margaret of Scotland, who in her own way lived out these readings. Margaret, born in Hungary about 1045, was the daughter of Eadward Athling, heir apparent to the English throne, and Princess Agatha of Hungary. At about the age of 10, she returned to England with her family but was forced back into exile after the Norman Conquest in 1066. In 1070, Margaret married Malcolm Canmore, King of Scotland. Of their eight children, three sons ruled Scotland in succession and their daughter Maud married Henry I of England. Margaret greatly influenced King Malcolm III.

To her husband and his country, Margaret brought the best of European culture and encouraged many by her life of Christian virtue. She worked for justice and improved conditions for the poor, guided the Celtic church toward strong ties with Rome, rebuilt churches, and brought the Benedictines to Scotland. In 1093 her husband and one son were killed in battle. Already on her deathbed, she died four days later. Margaret was a model of motherhood, one of the few canonized saints to have reared a large family. She was canonized in 1251 and in 1673 was named patron saint of Scotland.

The Eucharist is a sharing in the memorial meal and thanksgiving sacrifice of the one and only true king – Jesus – who is just and merciful. May our celebration help us not only to believe in, but also to follow and imitate his model of kingship as servant leadership.