Memorial of St. Thérèse of the Child Jesus

That cryptic saying, and the readings today, invite us to be wise, to let God enlighten us so that we can be humble, filled with awe and repent.

St. Thomas Aquinas, the renowned thirteenth-century Dominican friar, was the greatest theologian of his time, perhaps the greatest ever. Yet after a mysterious encounter with God at age 48, he retired from writing. We don’t know exactly what happened, only that one afternoon he returned from praying in the chapel having lost all motivation to write. “All that I have written appears to be as so much straw after the things that have been revealed to me” was all he could say.

In a sense, this story reflects what Job expresses in today’s reading. Having been through intense suffering and taken part in a lengthy argument about how to understand his trials in the light of a loving God, Job receives his own vision of the Almighty. Finally, he “smartens up” and realizes that it was never his role to figure everything out.

When Job says that the things of God are “too wonderful” for him, he isn’t saying he is too stupid to grasp or experience them. Rather, he is celebrating the rich and eternal love that God has for him. He is saying that God’s truth, beauty, and goodness are so vast that we’ll never fully understand or explain them.

Job’s experience is similar to Peter’s when he first met Jesus. “But now that my eyes see you, I repent in dust and ashes” is what Job says. Peter felt compelled to say, “Depart from me, for I am a sinful man” after the miraculous catch of fish. Both were humbled, and learned a lesson in humility.

Having learned that lesson, it is interesting that God goes on to bless Job. The numbers are significant. Thousands, seven, three – all perfect numbers suggesting that the virtue of humility opens up to us all the richness and treasures of God’s perfect love.

In the Gospel, the disciples rejoice in exercising the power Jesus gave them over demons. Jesus also rejoices to see them take risks in his name and proud they were experiencing the power of the Spirit flowing through them. But at the same time, Jesus knew that these disciples needed a course correction. Where they were proud of their spiritual power, Jesus wanted them to be proud of their heavenly citizenship. Where they were excited that demons submitted to them, he wanted them to be excited about the joy that comes from belonging to their heavenly Father. Their rejoicing, while a good thing, focused more on themselves than on the God whose power they had just witnessed.

The Word Among Us reminds us that this is the heart of the spiritual life. Growing in holiness is a matter of shifting the focus from ourselves to Jesus, and the heavenly calling he has given us. It doesn’t’ matter what “powers” we may have; what is most important is our willingness to accept God’s power and authority over our lives. That is where the Book of Job shines – he has been exemplarily faithful to God through untold tragedy and tribulation, which rather than making him proud, leaves him filled with humble awe at God’s goodness, and wanting to repent even for just “uttering what he did not understand, things too wonderful for him, which he did not know”! What a model of humble faith in God’s love.

Jesus goes on to say that to see him is to see the Father. That is what St. Thomas experienced when Jesus appeared to him, and he exclaimed, “My Lord and my God”. St. Thomas would probably agree to this succinct summary of Catholic theology: “We make our way back to the Father, through Jesus our Lord, with Mary our Mother, in the Holy Spirit.” 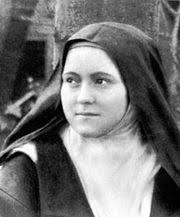 Today we honor a very humble, popular saint, Thérèse of the Child Jesus. Marie-Françoise Thérèse Martin was born in Normandy, France, in 1873, ninth and youngest child of Louis Martin and Azélie-Marie Guérin; only five daughters survived to adulthood. Their mother died when Thérèse was only five years old. The family then moved to Lisieux, where she was raised by her father, her sisters and an aunt. Three of her sisters became Carmelite nuns and the fourth joined the Visitandines. Thérèse entered the Carmel of Lisieux when she was 15. Her motto was a phrase from the great Carmelite mystic, John of the Cross: “Love is repaid by love alone.” Thérèse held special devotions to the heart of Jesus and to the spiritual Motherhood of Mary. Tuberculosis limited her activities, which led her to pioneer the ideal of the ‘little way’: fidelity in the small things, trust and complete self-surrender to God. Thérèse had a gift for writing, and the prioress, her sister Pauline, directed her to write first about her childhood, then about her life in the convent. These were combined into The Story of a Soul, a modern spiritual autobiography. Known popularly as The Little Flower, Thérèse died on September 30, 1897. Though her life spanned only 14 years, her faith and simplicity were remarkable. She was canonized in 1925 and made Doctor of the Church in 1997. She is a patron of missions.

The Eucharist is a humble meal with Jesus and a profound act of faith, as we listen to God’s word and commune with the body and blood of Jesus. May our celebration deepen our faith, lead us to be humble and open, and allow God to bless us and work through us to spread God’s love to the world.