Can you imagine Jesus saying, “Not even in the Catholic Church have I found such faith!” Would that shock you, or would you find it thought provoking?

The readings today, and the memorial we celebrate, invite us into humble faith and a life of prayer and caring.

Certainly, the main focus of today’s readings is on humble faith in Jesus. A centurion was an important figure at that time – in charge of one hundred men in the Roman military. The fact that he would make a request of an itinerant Jewish preacher, perhaps facing ridicule from his fellow officers, underlines his humble faith, as does the fact he doesn’t want to trouble Jesus to come to his house.

Jesus marvels at the humility of this centurion whose faith in Jesus is so strong he has no need to have him even come to his home. Relying on his own experience of exercising authority, he trusts Jesus can heal his slave “sight unseen” from a distance. And Jesus does heal his slave, remarking how the pagan Roman officer’s faith eclipsed the faith of anyone in Israel at that time.

The Church has also marvelled at the centurion’s faith, incorporating his words into the Eucharist before we receive communion – “Lord, I am not worthy that you should enter under my roof, but only say the word and my soul shall be healed.” We say that prayer at every Eucharist, hopefully taking into ourselves some of that humble faith of a Roman centurion.

That prayer should also cause us to pause and check our attitude towards those who are not Catholic. Is there any smugness in our thoughts and actions, thinking because we are Catholic, we are better than others? What do you think? Could it possible that today Jesus might even say, “Not even in the Catholic Church have I found such faith” in the presence of people like Corrie ten Boom whose faith in a concentration camp and forgiveness of the soldiers who oppressed the prisoners shone like a light for all to see, or in the presence of a Mary Johnson who forgave the young man who murdered her only son?

St. Paul in the first reading to Timothy adds to the dimension of faith, the dimension of prayerful caring for others. We are to care for and pray for everyone so we can live “quiet and peaceful lives in all godliness and dignity, so that others would be influenced by our example, and desire to be saved and come to the knowledge of the truth.” The psalm adds its voice to that teaching, encouraging us to bless the Lord and praise him for saving his people.

St. Paul adds another interesting detail to the way we live out our lives as Catholic Christians. Liturgists have changed the words of the consecration from “the Blood of the new and eternal covenant, which will be poured out for you and for all,” to “for you and for many.” There has been some resistance and uneasiness with this change ever since, because for a great number of the faithful, it smacks of exclusivity that could border on some of that smugness.

That translation, it seems, has something to do with purists who wanted to be faithful to a literal translation of the Latin language. That is fine in its own right, but unfortunately ends up not being very faithful to the teaching of St. Paul who in the first reading, reminds us our faith is in Jesus who is the “one mediator between God and humanity, and a ransom for all.” I would think fidelity to scripture would trump fidelity to a language, and find it unfortunate that in this case it did not. Hopefully we will someday come back to greater fidelity to St. Paul. 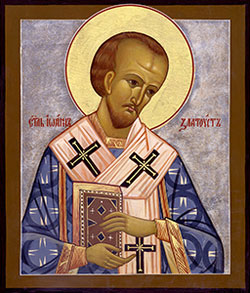 St. John Chrysostom, whom we honour today, is an example of someone who took the teachings of St. Paul and Jesus to heart and lived them. St. John Chrysostom was born in Antioch in 347 and was trained as an orator. He became a hermit in 374 but left due to poor health. He was ordained in 386 and became papal preacher, famous for his eloquent preaching. In 398 he became Patriarch archbishop of Constantinople and began reforms for clergy and laity alike. He was firm in political and ecclesial affairs and thus created enemies, including the Emperor. He was twice forced into exile to Armenia. After three years it was decided to send him further away, but he died enroute, worn out by his hardships. His sermons and writing did much to explain the Catholic faith and to encourage the living of Christian life. He was given the name “golden mouth” after his death and is honored as a saint in the Eastern Orthodox, Coptic and Catholic churches, as well as in some others.

St. John Chrysostom expresses that faith beautifully in a homily in the Office of Readings for the feast of the conversion of St. Paul on January 25th. He writes, “The most important thing of all to St. Paul, however, was that he knew himself to be loved by Christ. Enjoying this love, he considered himself happier than anyone else. Were he without it, it would be no satisfaction to be the friend of principalities and powers. He preferred to be thus loved and be the least of all, or even to be among the damned, then to be without that love and be among the great and honoured.

To be separated from that love was in his eyes, the greatest and most extraordinary of torments; the pain of that loss would alone have been hell, and endless, unbearable torture. So too, in being loved by Christ, he thought himself as possessing life, the world, the angels, present and future, the kingdom, the promise and countless blessings. Apart from that love nothing saddened or delighted him; for nothing earthly did he regard as bitter or sweet. Paul set no store by the things that fill our visible world, any more than a man sets value on the withered grass of the field. As for tyrannical rulers of the people enraged against him, he paid them no more heed than gnats. Death itself and pain and whatever torments might come were but child’s play to him, provided that thereby he might bear some burden for the sake of Christ.” St. John could write like that about Paul because he himself had many of the attributes of St. Paul.

Ultimately, it is the Eucharist that is paramount, to be celebrated with humble faith that seeks to live out the teachings of St. Paul, caring and praying for others as we lead peaceful lives of godliness and dignity.