The Word of God as a Foundation

Recently, a young couple gave me a gift of a plaque that read, “Sometimes you just have to bow your head, say a prayer and weather the storm.”

That saying fits the gospel today, in which Jesus invites us to come to him, hear his word and act on that word as a sure foundation to help us weather the storms of life. 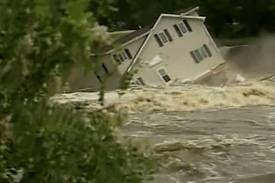 This year of 2021 has seen its share of natural disasters – from devastating, historic flooding in Europe that took numerous lives, to the loss of completely burnt-out communities on the west coast of the States and Canada, also with the tragic loss of numerous lives.

What a relief it is to the owners who find that their home or business was built on a strong enough foundation that it actually survived a flood. Jesus, in the gospel, and St. Paul, in the first reading to Timothy, are both urging us to arm ourselves against the storms of life by first of all placing our total and complete faith and trust in him as our Savior.

As the Messiah and Savior, Jesus came to redeem and to sanctify, to forgive and to heal. That is what St. Paul experienced on the road to Damascus. He who was persecuting the followers of the Way, and condoned the stoning of Stephen, the first martyr to death, was totally and gratuitously forgiven by Jesus who appeared to him as the Risen Lord. 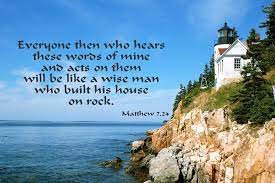 That experience of being so loved and forgiven as a sinner by Jesus transformed Saul into Paul, the great evangelizer. He knew firsthand the mercy of Jesus, and now can confidently proclaim that Jesus came into the world to save sinners – of whom he admits he was the worst. That experience of transformative faith became for Paul the foundation of a new life in Christ which nothing could shake – persecution, flogging, shipwrecks, betrayal by others, lashes, imprisonment. His faith in Jesus made him like a beach ball – any time he was pushed down, he simply emerged even stronger and more steadfast in his resolve to proclaim the good news of Jesus Christ.

Paul identified himself as a great sinner because, according to The Word Among Us, he understood he would always struggle with sinful drives, even after he had been baptized. He knew that Jesus came to save sinners – and that included not only criminals but “upstanding” citizens like himself. Paul’s transformation didn’t stop on that road – it was just a beginning. Salvation was an ongoing process for him, as it is for us all. Perhaps Pope Francis expressed it best when he once described himself by saying, “I am a sinner whom the Lord has looked upon with mercy.”

Which brings us to the other part of this verse: Christ Jesus came to save us from sin, not to condemn us for it. Jesus didn’t come to lord it over us or to make us stew in guilt over how sinful we are. Paul understood this too. He knew that in spite of the depth of his sinfulness, God had poured out this heavenly grace to cleanse him and lift him up. That’s why acknowledging that he was a sinner didn’t lead Paul to discouragement or despair.

Throughout his whole life, Paul managed to keep holding on to these two profound truths at the same time. Yes, he was a sinner. And yes, he was a beloved child of God. These are the truths he urged Timothy to hold on to. They are the truths he urges us to hold on to as well. So, let us rejoice with Paul in the seeming paradox of our “dual” identity: sinners who have received God’s mercy! We can be grateful that even though we are sinners, we are also beloved children of God, in Christ Jesus.

So, we are to come to Jesus in faith, ponder his word, study it, pray over it, and then try to live it especially by keeping the commandments Jesus gave us to love God, others, ourselves and even our enemies, as well as live the Beatitudes that form the core of his teaching.

The Eucharist includes a prayer we all say just before receiving communion that reminds us of our dual identity – “Lord, I am not worthy that you should come under my roof, but only say the word and I shall be healed.”

Forgiven and healed, we are then empowered to go out to weather the storms of life, as did St. Paul, and share with others the good news of that dual identity.