A Choice of Two Tracks

Joe Walsh, former member of the Eagles, sings in his signature song “One Day at a Time” of his life at one time being like riding on a “runaway train heading for the end of the line.”

Today’s readings are like a train track – two rails heading for either a dead-end or an experience of the kingdom of God, here and now. We are invited to get on the right track by putting our faith in Jesus and producing the fruit of the kingdom – love, a secure faith, and justice. 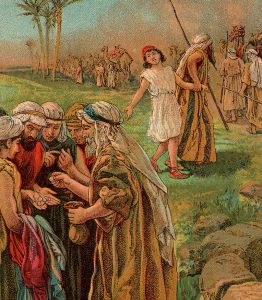 The first reading is one track. On it, Joseph prefigures Jesus: hated, betrayed, put into a pit, taken out again, sold for pieces of silver and taken into Egypt. His brother’s prefigure the chief priests and Pharisees who in their jealousy, hatred, false pride and stubborn self-will, resist Jesus to the end. Judah prefigures Judas in betraying him to the Ishmaelites.

The Gospel is the other track. On this track, the parable Jesus recounts of the wicked tenants prefigures what would be his experience: God is the owner of the vineyard (think kingdom); the tenants are the chief priests and Pharisees; the prophets are who they were, and the son is Jesus himself, the heir who had to escape to Egypt as a child, who as an adult would be betrayed, sold for silver, crucified, die, buried in this earth and on the third day rise again.

The genius of Jesus in telling this story is that his question at the end of the story, “What will the owner do with those tenants?” actually tricks the chief priests and Pharisees into condemning themselves: “He will put those wretches to death and lease the vineyard to others.” So when they realized that Jesus was telling this parable about them, they wanted to arrest him then and there.

The answer lies in the underlying dynamic of the reading. In the story of Joseph, his brothers are filled with jealousy of his favored position with their father, a jealousy so strong it leads to hatred, and finally to a plot to murder him that thankfully ended up not in murder but in his betrayal and sale to foreigners.

In the gospel, the same dynamic is at work. The chief priests and Pharisees are filled with jealousy of Jesus, insecurity in his presence, hatred and finally the plot to arrest him and put him to death, which was realized. What is at play here is a sinfulness (jealousy and hatred) that leads to sin (betrayal and murder).

The fruits of the kingdom would be just the opposite of these defects of character: a secure faith instead of jealousy, a compassionate love that forgives instead of hate, and transformative justice instead of murder.

The Eucharist is both an experience of forgiveness for any sin we have committed when on our own runaway trains, and healing for any painful emotion, negative attitude or addiction that may have caused us to sin.

May our celebration strengthen our faith in Jesus as Messiah, Lord and Saviour, and empower us to bear the fruits of the kingdom – love, secure faith and justice.