Pray for Peace; Work for Justice:

Have you ever seen the bumper sticker “If you want peace, work for justice?”

The readings today present us with a tweaked version: “If you want to live in joyful serenity, pray for peace and work for justice.”

The psalmist proclaims that those who hope in the Lord and who meditate on the Law, who pray with it and ponder it, are not only happy but also filled with delight and joy.

Both the readings use the image of a tree planted and deeply rooted by running streams, withstanding drought and bearing much fruit, as a symbol for those who are rooted in faith and prayer.

The gospel takes us down a different path of justice that balances the first two readings on faith and prayer. Jesus recounts the sad story of Lazarus, a rich man, who ignores the poor at his gate. Lazarus is not a bad man – just indifferent to the plight of the poor, and unresponsive to it. His sin is a sin of omission and not caring. Perhaps he was prayerful, but did not express his faith with compassion and active caring.

Then Jesus returns to the theme of prayer, but with a caveat that brings in justice. The brothers of Lazarus should “listen to Moses and the prophets.” That is an allusion to prayer, but prayer rooted in justice, for both Moses and the prophets were very strong on justice. In fact, Isaiah almost shockingly proclaims at the outset of his book “Zion shall be redeemed by justice, and those in her who repent, by righteousness!” (Is 1:27)

That does a number on Christians who claim we are saved by faith alone. Here Isaiah, and many other prophets, are kindred spirits with the letter of James where he proclaims unequivocally and repeatedly, “I by my works will show you my faith” (2:18), “faith apart from works is barren” (2:20), “faith is brought to completion by works” (2:22) and “For just as the body without the spirit is dead, so faith without works is also dead” (2:26). This alone should be enough to put an end to religious addiction that hides from the pain of humble service behind devotions, preaching, and reciting many prayers.

St. Mother Theresa of Calcutta is another person we can emulate in her dedication to contemplation and the Eucharist, grounded in a faith she then expressed through her exemplary ministry of reaching out to the poor and dying of Calcutta.

That need to express our faith through concrete ministry is the message Pope Francis is constantly trying to impress upon the Church – to go to the peripheries, to the marginalized, to not just give to the poor, but to touch them, to look them in the eye, to interact with them, to relate to them, to treat them like human beings and offer them the gift of dignity. 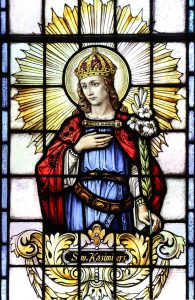 The saint the Church honours today is very fitting for today’s readings. St. Casimir was born in Poland in 1458, the son of Casimir IV, king of Poland. Involved in government of affairs, he was renowned for his sense of justice and his care for the poor. Casimir burned with a sincere and unpretentious love for God and for the poor. Nothing was more pleasant or desirable for him than to share his belongings, and give his entire self to Christ’s poor, to strangers, to the sick, to those in captivity and all who suffer. To widows, orphans and the afflicted, he was not only a guardian and patron but a father, son and brother.

It is difficult to imagine or to express Casimir’s passion for justice, his exercise of moderation, his gift of prudence, his fundamental spiritual courage and stability, especially in a most permissive age. Daily he urged his father to practice justice throughout his kingdom and in the governance of his people, and whenever anything in the country had been overlooked because of human weakness or simple neglect, he never failed to point it out quietly to the king. He actively took up the cause of the needy and unfortunate and embraced it as his own; for this reason, the people called him the patron of the poor.

Though the son of a king and descendant of a noble line, Casimir was never unapproachable in his conversation or dealings with anyone, no matter how humble or obscure. He always preferred to be counted among the meek and poor of spirit, among those who are promised the kingdom of heaven, rather than among the famous and powerful of this world. He had no ambition for the power that lies in human rank and he would never accept it from his father. He was afraid that the barbs of wealth which our Lord Jesus Christ spoke of as thorns, would wound his soul, or that he would be contaminated by contact with worldly goods.

Those who had personal knowledge of Casimir’s private life testify that he preserved his chastity to the very end of his life. He died of tuberculosis when he was 26 and was buried in Vilnius, Lithuania. Casimir is the patron saint of Lithuania and one of the patrons of Poland.

The Eucharist is itself a living out of today’s readings. It is our greatest prayer, through Word and Sacrament, but it also commissions us to go out to serve the poor and work for greater justice in our society.

So remember, if we want to experience greater joy and serenity in our lives, let us not only pray for peace, but also work for justice.