This feast invites us to emulate Peter’s faith, fidelity and ministry.

According to the Living With Christ commentary on this feast, early Roman Christians celebrated a feast in honour of their departed loved ones on this day, including their predecessors in the faith, Peter and Paul. In the 4th century, when the feast of these two saints was moved to June 29th, the emphasis of this day shifted to celebrating Peter and his successors as bishops of Rome, and expressing gratitude for their service.

The readings today focus on the role of St. Peter and his response to Jesus. The gospel deliberately points out that Jesus and the apostles were at Caesarea Philippi when Jesus posed the question of his identity to them. A variety of commentators provide the following information: 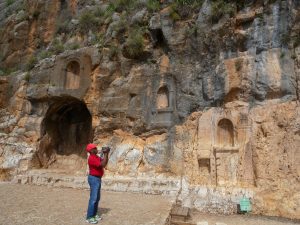 Caesarea Philippi, at the headwaters of the Jordan River, was a centre of pagan worship, home of ancient Syrian Baal worship that was strewn with fourteen temples. A large gaping cavern was thought to be the birthplace of the great god Pan, so much so that the place was called Panias. Herod built a great white temple there to honour the godhead of Caesar. Herod’s son Philip changed the name to Caesarea (Caesar’s town) and Philippi after himself, and enriched the temple.

So, while the orthodox Jewish religious plotted to kill Jesus as a heretic, he stands with twelve apostles in the midst of the ruins and splendour of the gods and religion of Greece, and the Caesar worship of Rome. Here, Jesus asks those who follow him who they believe him to be and expects an answer. It is as if Jesus deliberately set himself against the background of the world’s religions in all their history and their splendour, demanded to be compared with them and to have the verdict given in his favour. There are few scenes where Jesus’ consciousness of his own divinity shines out with a more dazzling light.

The answers the apostles gave Jesus indicate that the people were giving Jesus the highest human categories they could, that in him they were once again hearing prophecy as the direct and authentic voice of God. Peter’s response was amazing – that Jesus was both Messiah and Son of God. That was blasphemy to the religious leaders. Peter was saying that no human category could describe Jesus. Peter’s confession also shows that he knew Jesus personally, not just about him. Placed after the opening of a blind man’s eyes in Mark, Peter’s eyes have been opened to see who Jesus is. Simon, to whom God has revealed who Jesus is, will be the foundation of the church which Jesus is to build. The community of the disciples of Jesus is to be the true Israel, the children of Abraham. The community is those who wait and pray for the coming of the kingdom.

There is no documented case of anyone being called “rock” in Aramaic or Greek prior to Simon. Some scholars see Peter here as paralleled to Abraham. Just as Abram stood at the beginning of the people of God, had his name changed, and was called a rock, so also Peter stands at the beginning of a new people of God and receives the Abrahamic name “rock” to signify this. Peter has authority in the Church to make pronouncements whether legislative or disciplinary which will be ratified in the last judgment.

The scriptures provide us with the qualities of St. Peter that led Jesus to name him as the first leader of the fledgling church. Peter calls himself an elder who has witnessed the sufferings of Christ, and who is now sharing in the glory to be revealed. We also know that he who denied Christ three times, was forgiven by Jesus on the shores of Lake Tiberias. That experience of the unconditional, unmerited love of God as pure forgiveness, transformed Peter into the shepherd of the flock, much as God’s forgiveness had transformed David into the one true king that Israel ever had.

There are tremendous implications of this feast for us, the present-day followers of Jesus and members of his body, the Church. Like Peter, we are aware of the sufferings of Christ, not only what he underwent during his passion, but also the suffering that he still undergoes in those who are abused, unjustly treated, bullied, put down, discriminated against, tortured and persecuted to this day.

At the same time, we are also sharing in the glory that is to be revealed – in the liturgy as we hear his word and receive the very body and blood of Jesus, in the scriptures, in profound contemplative prayer, and in the joy that comes from selfless love for and service to God’s people.

We also have experienced the unconditional love of God that comes to us, and is always there for us, whenever we repent and come to the Lord for forgiveness and healing, especially in the sacrament of reconciliation.

Our task is to be like Peter, and to carry out the mission of Jesus in the world that he bequeathed to the apostles by giving to them the keys of the kingdom of heaven. What we bind on earth is bound in heaven, and what we loose on earth is loosed in heaven. That is amazing – we have been given the power to either build up or hold back the kingdom of God by our willingness, or refusal, to love and forgive.

During a retreat, Doris was contemplating a drawing of Jesus washing the feet of St. Peter, whose hands the painter used to convey a message. One hand Peter held up proclaims, “No – you can’t wash my feet” while the other hand resting on Jesus’ shoulder proclaims, “Yes, wash all of me!” It struck Doris that she was like Peter, needing to be reconciled with an abusive person in her life, yet afraid to. The next day, she informed me that she had morphed overnight into Jesus. Now she knew that she had to wash this person’s feet. That she did by taking two weeks to write this person a letter in which she gently described the hurtful behavior and shared her feelings of hurt without any attempt at revenge or punishment, simply trying to forgive. She was building up the kingdom of God and exercising the keys to the kingdom – what she was loosing here on earth was being loosed in heaven.

The Eucharist we celebrate on this feast makes present Jesus’ suffering love on the cross, is an experience of forgiveness and healing, and is a sharing in the glory of God that is to be revealed.

May our celebration empower us to emulate Peter, exercise the keys to the kingdom especially through forgiveness, and build up the kingdom of God here on earth.