Living in the Kingdom of God Through Faith and Repentance

Why is it impossible to starve in a desert?

The answer is because you can always eat the sand which is under your feet!

In the first reading, God promises never to destroy the earth again through the waters of the flood. In the second reading, we are told that God uses the waters of baptism to purify and save us. To be baptized is to walk with God with a clear conscience, free of sin, living in the kingdom of God. 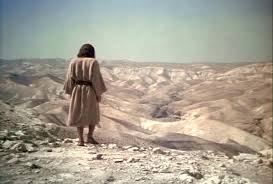 In the gospel, Jesus is baptized, though free from sin, to show he is one of us, a kind of second Incarnation. Whereas by his birth he took on our humanity, now he more specifically takes on our sinful humanity. In the end he would overcome the power of sin and death through his resurrection that would initiate the reign of God among us. That is why immediately after he is baptized, he is driven by the Spirit into the wilderness to confront Satan and to overcome the temptation to sin. The wild animals and angels waiting on him is a signal that the Kingdom of God, in Jesus, has already begun.

A psychiatric nurse was told the lurid history of a certain patient who had committed a terrible crime, had served his time and now was sent to the hospital to die. He did not want anyone to know what he had done and could not believe that God could forgive his crime so he resisted any attempt at reconciliation. The chaplain tried to persuade him but he consistently refused. The nurse, however, showed him every courtesy. She tucked him in at night, provided him with little favours, remembered his birthday, asked about his family, wrote him notes on her day off and developed a friendship with him. Near the end his closest friend came to see him and begged him to be reconciled with God. He persisted in his belief that God could not forgive him. In desperation, the friend reminded him of the love the nurse had shown him and suggested that God could do the same. The man replied that if the nurse knew what he had done, she too would reject him. The friend then confessed that he had told the nurse his whole story when he entered so she knew what he had done. The man was stunned and astonished. He broke down into tears, saying that if she could love him knowing all that he had done, then God too could love him.

As the angels waited on Jesus in the desert, so the Eucharist is food for us on our desert journey of purification and transformation. We believe in the Real Presence of Christ in the bread and wine, and as we receive, we are forgiven, healed and empowered to go out to spread the Good News that the reign of God has begun.

So, this Lent, and each day of our lives, let us live in the Kingdom of God, through genuine faith and sincere repentance.