Sr. Elaine Biollo, in a class on Culture & Spirituality, spoke about the reality of a paradigm shift in our lives. When digital technology was developed, apparently it was offered first to the Swiss watchmakers, who refused it believing their way of making watches was the best way. The technology then went to Texas instruments and a Japanese company, and the Swiss watchmakers lost seventy percent of their market over the next few years because they were unable to make that paradigm shift in their economic reality.

Today’s readings on this second day of Lent invite us to make a paradigm shift from any conditional love in our lives, to living out of pure unconditional love.

The first reading about the Mosaic covenant reflects the legalistic (conditional) nature of that covenant: reward and punishment, quid pro quo, blessings and curses, keeping the covenant and the commandments would lead to blessings; infidelity and idolatry will be punished as a curse.

The Gospel is a radical shift. We know Jesus is referred to as Son of David, never Son of Moses, because of the radical shift God took with the Davidic covenant – one of unconditional love.

Although David blew it (lust, adultery, a planned murder), he experienced that unconditional love as forgiveness and healing, and became the one true king of Israel. In Rohr’s term, he became a true wise man or elder, speaking with the authority of one who knows he was made king by God. That is why he could command the priests to give him the temple bread of presence to feed his soldiers that only priests were allowed. His reasoning? He was made king by God, and that is what God would do in the same situation.

Here, in the Gospel, Jesus refers to himself as Son of Man – stressing his humanity, and that in his humanity he will suffer. His Passion, Death and Resurrection reveals God as unconditional love and forgiveness. At the moment of his death on the cross, the Temple veil was torn from top to bottom. Jesus removed all separation from God and showed us the very heart of God – mercy, humility, compassion, total non-violence, unconditional love and forgiveness. The blood and water that flowed from his side on the cross symbolizes the eternal life his death was giving us. 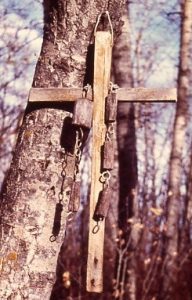 The passion of Jesus and his command to take up our cross is an invitation into a generative discipleship in which we give our lives away. Winston Churchill stated, “We make a living by what we get; we make a life by what we give away.” It is also an invitation into radical discipleship, into not only giving our lives away, but also dying in such a way that our deaths are an optimal blessing to the world and inspiring others – the blood and water flowing from our side as people pray for us at our wake and celebrate our funeral.

In Rohr’s terms, taking up our cross to find our lives is like breathing under water. It is paradoxical – like falling upwards. It is getting it right by doing it wrong.

To take up our cross is to do Step one – admit our powerlessness, our vulnerability, to accept the suffering of the healing journey. But that is the key to the kingdom – to accept suffering without bitterness or resentment, as Jesus did. The late Fr. Mathieu, a veteran Oblate missionary in northern Saskatchewan, liked to repeat, “The cross is a blessing, the cross is a blessing.”

John Bell of the Iona Community shares the story of a black woman running an orphanage for children whose parents had died of HIV/AIDS. Her love and commitment to these children was total and unconditional. He asked her what she would like to leave behind as her legacy. She thought a moment and replied in words simple and direct – that she would have spent everything she had and would meet God empty-handed because she had used up completely every gift that God had given her. She wanted to leave nothing behind except a little footprint that might help others find their way. In that way she was like Jesus.

The Eucharist is a participation in the life, death and resurrection of Jesus that gives us eternal life even now. May we have the faith to put our trust in him, make that divine paradigm shift into his unconditional love, take up our crosses and follow him into a new way of life.